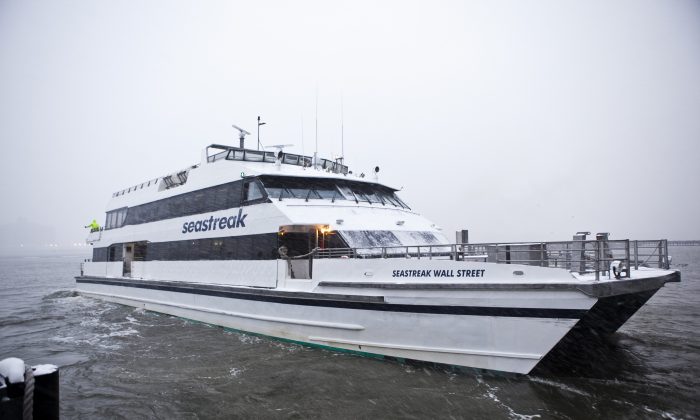 Rockaway Ferry Service Extended Until May

NEW YORK—Weekday ferry service between the Rockaways and Lower Manhattan will continue until May, Mayor Bill de Blasio announced Jan. 21.

The service was launched in November 2012 and was set to expire at the end of January. The ferry is operated by Seastreak. It also stops in Sunset Park, Brooklyn.

The Rockaway ferry service was put in place as an emergency measure after Hurricane Sandy to address the seven-month subway service suspension on the A line in the Rockaways. The ferry has now become a valuable transportation option for the city, said New York City Economic Development Corporation (NYCEDC) President Kyle Kimball.

The service has until now carried 200,000 passengers, according to the mayor’s office.

This is the ferry’s fourth extension, and there is an option to extend until August when the current extension expires in May. The EDC is issuing a request for proposals to identify the plausibility of a long-term service extension and operator.

Many commuters have been utilizing the service from day one, and say it has been a lifesaver.

”This is much more civil,” said Jessica Lopez, who commutes from the Rockaways to work in New Jersey.

Lopez didn’t even want to think about her commute if the ferry service is discontinued. She spends nearly a third of the usual time by taking the ferry, 45 minutes on average compared to 1 hour and 40 minutes riding the A train on a good day. Also, the A train conditions are very bad, Lopez said. Other commuters using the ferry said they used to drive to Brooklyn before taking the subway to Manhattan.

“You can’t compare the convenience,” said Raya Saratovsky, who works near Pier 11 where the ferry stops and commutes from the Rockaways. “A city like New York is surrounded by water. We should be developing our waterway transportation more.”

The only downside is the ferry is scheduled to serve the regular nine-to-five working hours, ferry riders say. There’s a service gap between the 9:25 a.m. departure in the Rockaways and the next ferry at 4:35 p.m. There is also no service on weekends.

The rides are typically crowded, Lopez said, but the late-morning rides are less so.

One commuter said he had only started using the ferry a month ago, as he works near the World Trade Center, lives in the Rockaways, and there was Sandy damage that delayed his return. Soon, he says, the ferries will be needed even more because others like him will start to use the service as well.

The Rockaway ferries connect a temporary landing on Beach 108th Street in the Rockaways, the Brooklyn Army Terminal, and Wall Street in Lower Manhattan via Pier 11. Free transfers are offered between Pier 11 and East 34th Street in Midtown.