Robots With Ultraviolet Light Are Newest Weapon Against Coronavirus 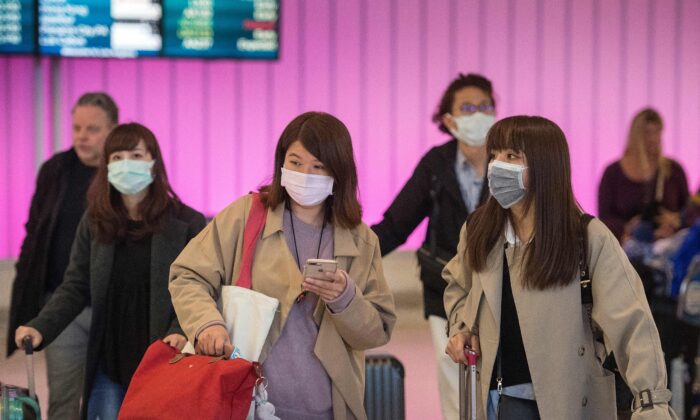 Passengers wear protective masks to protect against the spread of the Coronavirus as they arrive at the Los Angeles International Airport, Calif., on Jan. 22, 2020. (Mark Ralston/AFP via Getty Images)
By Chriss Street

China’s outbreak of a deadly coronavirus (COVID-19) is paving the way for robots beaming ultraviolet light as the newest weapon to kill communicable diseases in public spaces.

The U.S. Centers for Disease Control and Prevention states that the top disease prevention technique is to avoid close contact with people who are sick. But that is impracticable where about 55 percent of the world’s 7.7 billion people are now urbanized.

The newest weapon to combat the spread of communicable diseases in public interactions is a slice of sunlight’s ultra-violet rays. In its “germicidal range” wavelengths from 200 to 280 nanometers (UVC), it is an effective disinfectant against pathogens, according to Klaran, a firm that specializes in UVC LED products.

According to Dr. Philip Tierno, Clinical Professor of Microbiology and Pathology at New York University (NYU), sunlight’s ultraviolet rays already kill most harmful bacteria on exposed human clothing by interfering and destroying nucleic acids of bacteria and other microbes.

Most consumers are not aware that concentrated UVC light has been a disinfectant in the manufacturing of juices and beverage items, as well as grains, fresh fruits and vegetables cheese, baked items, frozen foods, and liquid egg products for 50 years.

After E. coli outbreaks involving unpasteurized apple cider and fruit juices in 2001, the Food and Drug Administration (FDA) approved “cold pasteurization” that requires most juice-manufacturing companies to follow Hazard Analysis and Critical Control Points (HACCP) that may include UVC irradiation. Although UVC is proven to reduce or eliminate E. coli, Salmonella, Listeria, and other foodborne pathogens, “irradiated food does not meet the U.S. Department of Agriculture’s definition of organic.”

UVC has been slow to be adopted as a food pathogen reducer due to higher costs and concerns of the negative connotation between linking the irradiation process with food. But that may change with coronavirus already spreading from China to 29 other nations.

The Chinese regime announced on Feb. 15 that the nation’s central bank would use ultraviolet light or high temperatures to disinfect its yuan currency bills, then seal and store the cash for 7 to 14 days—depending on the severity of the outbreak in a particular region—before recirculating them.

A 2017 study of $1 bills circulating in New York City identified “397 bacterial species representing more than 20 bacterial phyla” in currency samples. Although it is still unclear regarding the survival period and transfer mechanism of the new COVID-19 coronavirus, the New York study found that “microbial communities” survived for up to 12 days and spread through human oral and skin transfers.

Entrepreneurs are cranking up for a massive increase in UVC disinfectant applications.

With studies finding pathogens present on 94.5 percent of personal mobile phones and 50 percent hospital employee keyboards, Orlando-based Seal Shield is offering ElectroClave cabinets that can disinfect 4 computers and 10 mobile phones at a time.

Los Angeles-based Dimer UVC Innovations has been offering its UVC germ-killing UV Hammer robots, a sanitizing device, that can disinfect up to 10 hospital rooms per hour. Dimer just announced that it will offer GermFalcon robots designed to autonomously navigate through airplane cabins and passenger terminal waiting areas to strategically “kill viruses, bacteria, and superbugs” on high-touch surfaces.