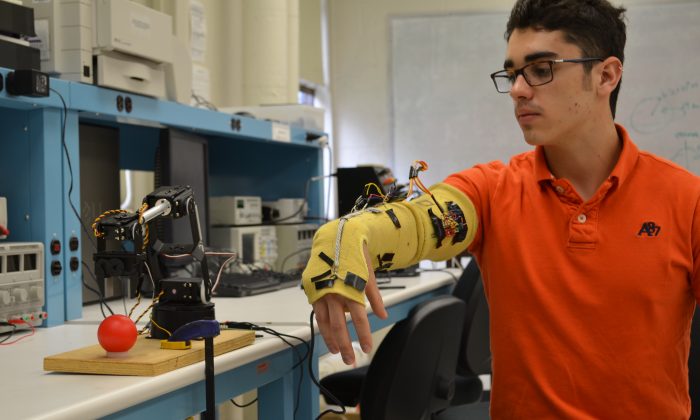 Vinicius Bazan, an exchange student from Brazil at the Polytechnic Institute of New York University, wears an electronic sleeve that lets him control a robotic arm. Students in New York City's technology schools will be among the first pioneers of the city's new focus on a technology economy. (Courtesy of Jared Frank)
New York

NEW YORK—The financial crisis of 2008 set off a spark, and officials realized they couldn’t put all their cards into the finance industry for revenues. Seeds were planted for technology and film, yet the deeper hope is to turn the city into a hub for startups.

Bringing this hope to fruition will take more than just a well-laid plan, however. The first wave will come through the city’s technology students as they begin their foray onto the new path laid before them.

“These companies need talent if you’re going to build a startup culture. You need to have a filled pipeline, from high school, to college, to startup companies,” said Vikram Kapila, director of the mechatronics and robotics lab at the Polytechnic Institute of New York University (NYU-Poly).

Kapila was joined by students and teachers for a Polytechnic Institute of New York City electronics expo, which was held at MetroTech Plaza in Brooklyn on May 20. Students and professors showed their creations beneath a large tarp, and tables were lined with everything from smart materials such as mechanical fish and cement that can display electronic images, to eye-tracking robot heads.

The consumer robotics market is also on its way back, after a brief hiatus caused by the financial downturn. Yet, this time around, teams have smartphones and tablets at their disposal, and they’re using the devices to make robotics more accessible.

Jared Frank, doctoral candidate and lab manager at Mechatronics and Controls Lab of NYU-Poly, is working on making natural interfaces with robotics, and smartphones and tablets are his tools of choice.

“We hope to turn science fiction into reality with these apps,” he said.

Frank’s trained robot head follows his movements and maintains eye contact. “People have always been fascinated with robots,” he said. “We just don’t trust them yet.”

Nearby, Vinicius Bazan, an exchange student from Brazil, was wearing a cloth sleeve with computer chips and wires taped or sewn into the fabric. A nearby robotic arm mimicked the movement of his arm.

Bazan is working in a similar field to Frank—making interfaces more accessible—yet his focus is on wearable interfaces.

He said the robotic arm he has been working on has enormous potential, and one day may allow factory workers to program the movements of manufacturing bots by just going through the movements themselves while wearing one of his electronic sleeves.

“It’s to make it easier for people to interact with complex robots,” he said. “The main idea here is to make life easier.”

Other teams were more focused on how they can help solve more human problems. Preeti Raghavan, a physician-scientist at the Rusk Institute of Rehabilitation Medicine, along with her team, is working on technology to help stroke victims regain their motor skills.
Raghavan notes that strokes are the most common cause of disabilities in the United States. Her team is working on a rehabilitation system that doubles as a game. The goal is to create a program for rehabilitation patients that they’ll actually want to play and that won’t require expensive therapists.

On a nearby table, sits a cylinder that is held wrapped in cloth and sensors that attach to a person’s wrist. On a computer screen, the cylinder controls a virtual coffee cup, which needs to be moved in order to catch balls on the computer screen. Raghavan said the patients pick up the cup, and try to learn how to use the right amount of pressure and the right tilt. If they squeeze too hard the balls go flying out, if they tilt the cup too far the wristband vibrates to warn them.

Two of the students who worked on the project, Christopher DiMauro of the game innovation lab, and Martin Gnatt of chemical and biomolecular engineering tinkered with the system as Raghavan spoke.

She said the team wants to give an option to people in rehab that can cut costs while incentivizing them to keep using it.

While the projects shown at the expo were on small tables beneath a large tarp, they all had real-world potential, and the teams were clear that the ability to turn their ideas into reality is a rare opportunity that New York City brings.

According to Viswanath Aluru of the NYU Langone Medical Center, one of the often forgotten strengths of New York City is its pull for international students—people he says know the problems in their own countries.

“They have lots of ideas, but they don’t have the resources in their countries [to create them],” he said. “It’s a good way to make an economy.”