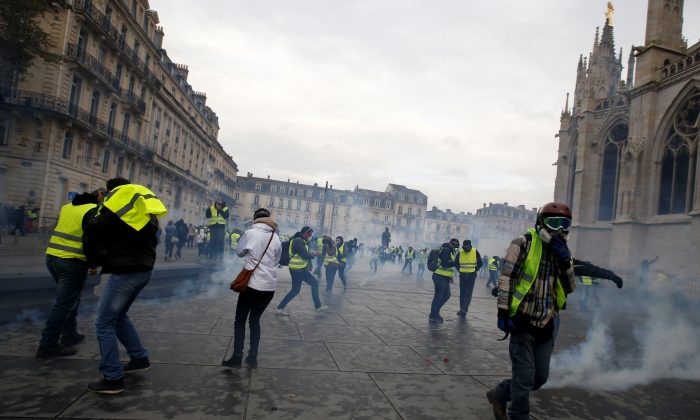 Protesters wearing yellow vests walk through tear gas during clashes with police at a demonstration of the "yellow vests" movement in Bordeaux, France, on Dec. 8, 2018. (REUTERS/Regis Duvignau)
Europe

PARIS—An estimated 125,000 yellow-vested protesters took to the streets in France on Dec. 8 to vent their anger against the government as riot police tried to contain the protest that has grown by the week. Although the number of protesters swelled compared to the previous week, there was less violence and destruction throughout the country.

A ring of steel surrounded the president’s Elysee Palace—a key destination for the protesters—as police stationed trucks and reinforced metal barriers throughout the neighborhood.

Demonstrations have been taking places elsewhere in France as well. About 89,000 security forces were deployed across the nation, including military, local police, and special police to contain the protesters.

More than 1,200 people were arrested before the protest began in an effort to mitigate violence as much as possible. Police also confiscated from protesters anything that could be used as protection such as helmets, protective glasses, and cartridges of saline solution for the eyes.

Saturday’s yellow vest crowd was overwhelmingly male, a mix of those bringing their financial grievances to Paris—the center of France’s government, economy and culture—along with groups of apparently experienced vandals, who tore steadily through some of the city’s wealthiest neighborhoods, smashing and burning.

Police and protesters also clashed in the southern French cities of Marseille and Toulouse.

The government’s plan was to prevent a repeat of the Dec. 1 rioting that damaged the Arc de Triomphe, injured 130 people and tarnished the country’s global image. But although Saturday’s protest in the French capital started out quietly, by late afternoon at least 551 people had been taken into custody and 60 people had been injured, according to Paris police and hospitals.

Some stores along the city’s elegant Champs-Elysees Avenue had boarded up their windows as though bracing for a hurricane, but the storm struck anyway, this time at the height of the holiday shopping season. Protesters ripped off the plywood protecting the windows and threw flares and other projectiles as they were repeatedly repelled by tear gas and water cannon.

All of the city’s top tourist attractions—including the Eiffel Tower and the Louvre museum—shut down for the day, fearing the kind of damage that had hit the Arc de Triomphe. Subway stations in the city center also closed and the U.S. embassy warned its citizens to avoid all protest areas.

Amid the melee, President Emmanuel Macron remained invisible and silent, as he has for the four weeks of a movement that started as a protest against a gas tax hike and metamorphosed into a rebellion against high taxes, eroding living standards, and what many see as his inability to address the concerns of France’s regions and ordinary people.

“We are here to tell (Macron) our discontent. Me, I’m not here to break things because I have four children so I am going to try to be safe for them, because they are afraid,” said protester Myriam Diaz. “But I still want to be here to say ‘Stop, that’s enough, this has to stop.'”

Dominic Blaise, a 57-year-old aeronautics engineer from the suburbs, came to the demonstration with his son. “I’m not so bad off because I have a good salary, I have enough to live. But I’m here to support my son because he has a lot of trouble getting by and I think all parents should do the same to support their kids, because next generations will be in a lot of difficulties,” he said.

This was his third weekend of protesting in Paris.

The reason Macron’s proposed fuel tax hike—equivalent to about 25 cents a gallon—sparked such a fervent reaction is that it touched a raw nerve among the working class.

Unaffordably high housing prices, particularly in Paris, have meant that over the last few decades the middle class has left the cities to live in houses with little gardens, and drive long distances to work. Thus the average French worker’s lifestyle became dependent on fuel and fuel prices.

Eric Verhaeghe, an author, businessman, and political columnist, said that although wages have modestly increased, taxes have increased more and so people feel they’re becoming poorer.

People feel the state is “confiscating the fruits of their labor to redistribute them in a system that is not satisfying,” he said.

To Macron, the term means not only encouraging start up businesses in France, but also that he wants to turn France into “a nation that thinks and moves like a startup,” as he described it shortly after his election in June 2017.

“The old French nation is saying ‘our future, our destiny is not to become a startup nation… This dream is not ours,” said Verhaegen. Their dream instead, he said, “is that their beloved France of old be modernized and adapt, but preserve its core values. They are not interested in a modern elite transforming the country.”

“France has been a beacon for the world, it was a country with eternal vows, and today it’s totally decaying. We need to find ourselves again as people who share common values,” he said.

According to Verhaegen, the heart of the movement is libertarian, wanting less government and more freedom, with aims similar to the original Boston Tea Party and the modern Tea Party movement in America.

He also said there are hooligans among the demonstrators, but they are not the core.

Paris public prosecutor Remy Heitz said on Dec. 2 that among the 378 people who were put in custody on Dec. 1, many were 30- and 40-year-old men coming from regional areas, who are well integrated in society, and who came to fight against local law enforcement.