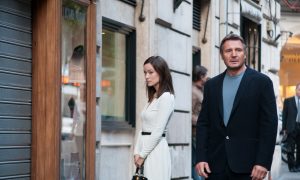 Film Review: ‘Interstellar’ Looks for Salvation in All the Wrong Places

“Six billion people, trying to have it all.” That line from “Interstellar,” the latest eye- and mind-boggling space-travel film from Christopher Nolan—explains it all.

Parasitic gobbling of Earth’s resources by humans, and the resultant wish to find another planet to gobble—we can’t get enough of that. It’s the No. 1 premise of futuristic space-travel movies.

Why? Because it’s true—we’ve eaten ourselves out of house and planet. Does that mean you should go see it? Will it solve our gobble problem? Do we really think, after NASA’s Antares rocket blew up last Tuesday, that we’ll be able to fly a spaceship through a galactic wormhole out near Saturn? We haven’t even put an astronaut on Mars yet! It’s another 342,077,666.43 miles from Mars to Saturn! Fuggeddaboudit!

So probably not. Is it fun entertainment? Maybe. It definitely calls for a new rating category, though: “Rated A. For astrophysicists.”

Coop’s a farmer now. The whole world’s gone dustbowl like “The Grapes of Wrath” on steroids, the “blight” having taken out the world’s wheat, okra, and (very soon) corn.

They never explain what the “blight” is, but maybe it’s a company like the one that brought us DDT, PCPs, Agent Orange, and GMOs—currently en route to handing us a global dustbowl.

So anyway, Coop’s coming out of retirement to leave the world. Wait, what? Leave? Not save? Isn’t that wrong? Nope. As Michael Caine’s character states, “We’re not meant to save the world, we’re meant to leave it.” (As in colonize other planets.) And there you have the source of the entire dystopian nonsense in a nutshell.

The mission, should he choose to accept it, is explained thusly: “You have to decide between seeing your children again and the future of the human race.”

So Coop saddles up for the long run to Saturn, and because it’s McConaughey playing Coop, one imagines Coop humming, “Some people call me the Space Cowboy.” Alright, alright, alright.

Actually the leaving is all very traumatic (and fairly well acted). Coop tells his young daughter, “When I’m near a black hole, time’s gonna change for me.” He’s going to places where one hour will equal seven Earth years. He might come back younger than her. If he comes back.

Meanwhile, on a sort of a “Back to the Future” tangent, daughter Murphy (Mackenzie Foy) senses a ghost trying to communicate (not in Morse, but binary), giving coordinates. What does it all mean? Are you a mathematician? You better be.

And the Space Cowboy makes it to Saturn. And they dive down that wormhole. That’s fun, but you’ve seen stuff like it many times before.

They (“they,” as in Coop & crew, including a miscast Anne Hathaway) go to a planet where the water only comes up to your knees. But the waves are the height of Mount Everest. How does that work? That’s fun too.

And soon, (no, not soon—it’s a nearly three-hour movie) dad Cooper’s in a space-suit, skittering around in a “Matrix”-like cubist-fractal sort of dimension and trying to communicate with someone on the other side by making watch hands tick in Morse code.

“Interstellar” mostly sounds like a senior philosophy seminar. You’d probably need three viewings to make sense of the physics, mathematics, philosophy, and tossed-in pseudo-versions of all those fields, but overall it’s too boring to go once, let alone thrice. Sample: “If a black hole is an oyster, then the singularity is the pearl.”

And then there’s a boatload of space movie techie-talk: “Set up basecamp and secure the modules! 3-2-1—eject! Eject!” and the like.

And even more of the crawling weightlessly around, tugging, and button-pushing spacecraft stuff, but you can’t tell what any of it means.

Could we have seen this coming? Director Nolan also executive-produced Johnny Depp’s cyber-yakky “Transcendence.” Clearly the man gets very excited about solving the future with science, but the result of these films is sort of like that new wave song lyric “He blinded them (his audience) with … Science!”

Granted, there are some pretty great space visuals. A gargantuan Saturn ring with a superimposed remote spaceship fleck slowly drifting, is fairly stunning. Still, if you like that kind of scale, the ones in Terrence Malick’s film “The Tree of Life” are more visceral and stay with you longer.

Credit must be given: discussions of higher dimensions, the notion that love is the one thing that transcends time and space, along with searching for answers to thwart humanity’s coming parasitic demise—it’s admirable to try and translate these concepts to the silver screen.

Our spaceships are still blowing up, let alone approaching the capability of navigating galactic wormholes. Humans aren’t dimension-hopping aliens. To ensure our future, we need to forget about the wormhole solutions. Nolan’s next film should maybe focus on growing some better food and keeping the topsoil from blowing off. Worms. Not wormholes.