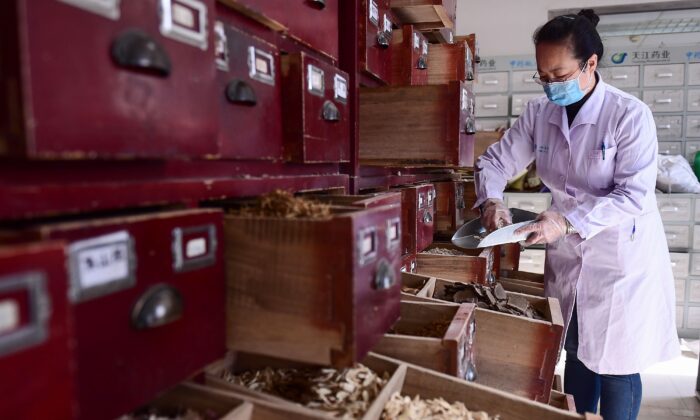 A medical worker is preparing herbs according to a prescription of traditional Chinese medicine at a hospital in Shenyang, China on Feb. 20, 2020. (STR/AFP via Getty Images)
Health & Safety

Stroke is one of the leading causes of death and disability worldwide. In the absence of effective treatment, prevention is considered the best measure to deal with this affliction. Researchers have recently shown that traditional Korean medicine Uwhangchungsimwon (UCW), a multi-component herbal product, is effective in helping prevent strokes.

But first, let’s look at what UCW is.

It is composed of various herbs, including bezoar (gallstones of bovine gallbladder) and musk (dried secretion from mature male musks’ glands). Since bezoar and musk are extremely rare and expensive, they were only used in the imperial court in ancient times.

After hundreds of years of clinical application, however, UCW has now become a highly used medicine in Korean medicine and traditional Chinese medicine, and many families use it as regular medicine.

The quality of Korean pharmaceutical products is relatively high due to the focus on the refinement of herbs. Although the price of UCW is higher than Niuhuang Qingxin Wan made in China, the active ingredients and adverse reactions are clearly labeled, and the quality is more guaranteed. Before the pandemic, UCW was even a popular product purchased by many Chinese tourists returning to China.

From the perspective of Korean medicine, UCW has the effect of clearing away heart fire, detoxification, relieving rheumatic pains, and reducing phlegm, and can be taken regardless of one’s physique.

Modern pharmacological research has found that UCW has the effect of sedation, antipyrexia, hypoxia resistance, and lowering blood pressure and can improve symptoms caused by myocardial ischemia. It is widely used in clinical practice for the treatment of dizziness, neurasthenia, stroke aura, cerebral thrombosis sequelae, hypertension, and mental depression.

The research group of Hong Jin-young, a senior researcher at the Institute of Spine and Joint Research, Jaseng Hospital of Korean Medicine evaluated the effect of UCW in preventing stroke by injecting it into the nerve cells of experimental rats at three concentrations (2, 10, and 50 micrograms/mL) and then inducing a state of ischemic stroke caused by blood vessel blockage.

The results showed that the higher the concentration of bovine bezoar heart-clearing pill, the higher the survival rate of nerve cells in a stroke state.

In another cell experiment conducted by the research team, the effect of UCW on inhibiting oxidative stress in nerve cells and activating growth factors involved in the protection and regeneration of nerve tissues was also confirmed.

Hong emphasized that the excellent effect of UCW on preventing stroke has been “objectively proved through experimental studies, which is of great significance.” He also planned to explore the use of UCW in treating various cardiovascular and cerebrovascular diseases.

The research results were published in the international academic journal Antioxidants on July 18.

Other than preventing stroke, the research team from the Korean Hospital affiliated with Daejeon University in South Korea earlier analyzed the anti-depression effect of UCW and the changes it caused in brain tissue through animal experiments, successfully confirming the mechanism of UCW in treating depression. That research was published on Jan. 31, 2020 in Frontiers in Pharmacology, a SCI (E) level journal.