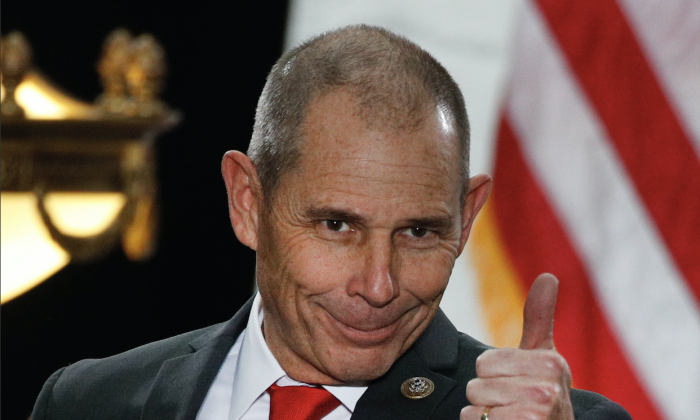 Rep. John Curtis (R-Utah) gives a thumbs up before a event with then-President Donald Trump at the Rotunda of the Utah State Capitol on Dec. 4, 2017, in Salt Lake City. (George Frey/Getty Images)
2022 Midterm Elections

The election will take place by mail-in ballot in four congressional districts created by Utah’s legislature in 2021, with limited opportunities to vote in person.

Moore, a management consultant, was first elected in 2020 in a field of 12 primary candidates, though critics called him out for living in Salt Lake City, 15 miles outside the congressional district.

In the general election, however, Moore defeated his Democrat rival Darren Parry with nearly 70 percent of the vote. He moves forward in the 2022 primary, endorsed by Utah Senate President Stuart Adams.

Though Moore voted against Donald Trump’s second impeachment, he voted twice to keep Liz Cheney (R-Wyo.) as conference chairman. He also supported bipartisan legislation to form the commission to investigate the Jan. 6 protest at the U.S. Capitol.

“I ran for Congress to ensure we have conservative leadership for our nation’s future,” said Moore, a former foreign service officer for the Department of State, on his campaign website.

“Who we send to Washington matters. Elections are about the future, and the stakes have never been higher.”

Moore is staunchly pro-life on the issues and favors a secure border, including competition with China, reducing inflation, and affordable health care.

In Congress, he supports the Federal Agency Sunset Commission Act and the Fiscal State of the Nation Resolution to make the government more efficient and fiscally responsible.

“I also am working to recoup the hundreds of billions of dollars from COVID-19 relief funds that were never obligated. We should use these wasted dollars for debt reduction, not additional spending. Reversing the debt-to-GDP ratio is at the top of my fiscal agenda,” Moore said.

Andrew Badger said he’s running to fix a “broken border” and fight inflation, as he sees the country is “in a state of crisis.”

Badger said the current Republican representatives aren’t acting with a sense of urgency to address these issues.

“My wake-up call to this fact was what happened with the disastrous withdrawal from Afghanistan. Why has not one single official—from Mark Milley to Lloyd Austin—been held accountable?

“Afghanistan is symbolic of the lack of accountability in the Biden administration in general. Biden is destroying America, but it’s weak Republicans who are letting him get away with it.”

Badger says, “the central issue of this election is about who is going to fight back against a corrupt D.C. establishment to return power back to the people.”

“Based upon the feedback I’ve heard from constituents, the greatest challenge we face is a corrupt [and] accountable government that has too much power.

“We have to fight back against government overreach and our God-given liberties as enshrined in the Constitution,” he said.

“Constituents in the district also feel our representatives are out of touch with them on issues like election integrity, fighting COVID mandates, and supporting parental rights in education. These issues, in particular, have all been central to my campaign.”

Badger, a Harvard graduate, is running on an “America First” platform that he said “isn’t about [former] president Trump” but about policies and principles that keep America great.

“Its first and foremost definition means that the government works for us, not the other way around,” Badger said.

“I believe … Republicans must stop playing defense and go on the offense in holding the Biden administration accountable. This will put Biden on his heels and obstruct his radical agenda over the next two years where he’ll likely try and use his ‘pen and phone’ to pass executive orders like Obama.”

Cannon, a small business owner, believes the way to balance the nation’s finances is to cut federal spending and reduce the trade deficit. She also supports maximizing local control and is pro-life.

The news of the impending overturn of Roe vs. Wade by the U.S. Supreme Court brings “great responsibility to those who stand to protect the lives of the unborn,” Cannon said on her campaign website.

“We must fund pregnancy resource centers, we must work nonstop to help women facing an unplanned pregnancy and don’t know where to turn, and we must support policies to aid families, not tear them apart.”

Stewart was first elected in 2012 when he defeated his Democrat rival, Jay Seegmiller, with 62 percent of the vote.

In Congress, Stewart served as chairman of the House Subcommittee on the Environment, and in 2021 he introduced the Fairness for All Act to afford LGBTQ+ people more legal protection.

Democrats saw Stewart as politically vulnerable due to his support of Donald Trump.

In the 2020 general election, however, Stewart secured another term despite a significant challenge from Kael Weston, a Democrat and former State Department employee.

Stewart seeks a sixth term as a religious conservative. He believes the main issues in this campaign are religious freedom, national security, the national debt, and the rise of socialism.

“I promised to reign in out-of-control spending. When I was first elected, our country had annual deficits of over $1 trillion,” Stewart said on his campaign website.

“I have worked to decrease our deficit by over 60 percent. I voted for budgets that decreased spending for three consecutive years for the first time since the Korean War. There is so much more work to do, but we are making progress.”

On her campaign website, Rider said, “2022 is about the future of the Republican Party. Our current elected officials have gone too far, and have abandoned practical, solution-oriented policymaking in favor of toxic obstructionism, leaving a trail of politically homeless Republicans in their wake.

“With a new district and a new path ahead of us, it’s time to say goodbye to ineffective career politicians and elect someone ready to roll up their sleeves and go to work for District 2.”

In 2017, voters elected Curtis to the unexpired term of Rep. Jason Chaffetz (R-Utah), who resigned. Curtis defeated Herrod and Tanner Ainge in the primary and Democrat Kathy Allen in the general election.

Since he took office, Curtis scored the second-highest approval rating among Utah’s four U.S. Representatives, according to a Utah Policy and Y2 Analytics poll.

Although Curtis voted against both articles of impeachment against Trump, he and 34 other Republicans voted to establish the Jan. 6 commission along with Democrats.

“Big tech colludes with liberal interests to silence conservative voices. Twitter blocked access to a story on Hunter Biden’s laptop in the lead-up to the election and removed Trump’s Twitter account while keeping Iranian and Chinese propaganda figures,” Curtis said on his campaign website.

“Big tech also incentivizes anger, disinformation, and divisiveness. We need to hold these big-tech companies accountable and mandate transparency to the American people around their decisions that affect all of us, especially vulnerable populations, like our children.”

Provo real estate developer Chris Herrod hopes to make good on his second challenge of Curtis in the June 28 primary as a former Utah state representative from 2007 to 2012.

Herrod’s campaign website describes him being “passionate about this country, U.S. Constitution, and conservative principles.”

A lifelong Republican and member of the Church of Jesus Christ of Latter-day Saints, Herrod views politics as a “pursuit that should be limited in nature. ”

“As part of that conviction, [Herrod] believes in self-imposed term limits and has concluded that too much power can be accumulated by one individual, which is not good for the legislative process.”

Glenn Wright, a Democrat who runs unopposed in the June 28 primary, said his reason for running for office stems from an incident that occurred while his son rode with him on his motorcycle.

“We were attacked simply because my motorcycle has a ‘Black Lives Matter’ bumper sticker on the back. A man repeatedly cussed at and tried to hit us with his truck until we were thankfully able to escape,” Wright told The Epoch Times.

“The events of that day showed me firsthand just how divided our country truly is. If someone is willing to hurt a child because they disagree with the parent’s personal stance on a social issue, there has to be a source fueling their hatred.”

“My biggest goal in running for office is to unite a divided nation. I promise to answer to, fight for, and prioritize my constituents, not just my political party.”

If elected, Wright said he would work to bring about a new era of workers’ rights by making it easier to form a union and empower employees, not corporations.

“Just as importantly, healthcare is a right that should not be reserved only for a select few. I will fight to make healthcare more affordable by making the market competitive,” Wright said.

As a pro-choice candidate, Wright said, “a woman’s right to choose has the potential to no longer be protected at the federal level.”

“No one should have the right to interfere in a personal, private decision between a doctor and their patient. Private health care decisions are exactly that—private—and should be protected.”

Elected to office in 2020, Owens is a nonprofit executive and former New York Jets and Oakland Raiders football player. He is one of two black Republicans in the U.S. House.

“I am proud to support the bipartisan Human Trafficking Prevention Act of 2022 because it fights this form of modern-day slavery with expanded prevention, comprehensive enforcement, and renewed education efforts,” said Owens in a statement.

“It’s pretty clear to all of us that our nation is facing a moment of real crisis. Record inflation keeps families struggling to put gas in the truck, food on the table, and clothes on their kids’ backs,” Hunsaker told The Epoch Times.

“Failed Democrat policies are destroying our economy and leaving voters like you and me powerless.