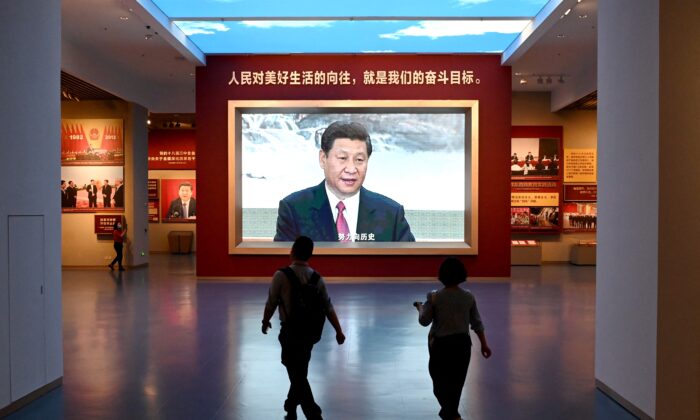 Journalists walk past a screen showing video footage of Chinese President Xi Jinping, during a visit to the Museum of the Communist Party of China, near the Birds Nest national stadium in Beijing on June 25, 2021. (Noel Celis/AFP via Getty Images)
China Human Rights

On Oct. 5, Reporters Without Borders (RSF) posted on its official website Secretary-General Christophe Deloire’s response to the accusations and threats against the organization by the editor-in-chief of the Chinese regime media Global Times.

On Oct. 2, Hu Xijin “violently attacked” the press freedom organization in his editorial published on Global Times, says RSF. Hu specifically targeted RSF’s project Journalism Trust Initiative (JTI), “which aims to promote independent journalism and fight disinformation around the world,” the organization explains on its website. Adding that Hu accused RSF of “building an alliance of lies” to harm China.

Hu called RSF a “wild dog,” and threatened that it better watch out for China’s “stick.”

RSF Secretary-General Christophe Deloire responded to Hu saying, “In this paranoid and threatening text, Mr. Hu Xijin goes out of his way to attack the work of Reporters Without Borders (RSF) but does not manage to give a single factual argument in support of his theses.”

Deloire further explains, “Because RSF denounces its repressive legal framework and its abusive use of criminal law, the Chinese regime has become accustomed to labeling our organization as anti-China, just as it systematically calls factual information that does not correspond to its propaganda narrative ‘fake news.’”

Deloire responded to Hu’s five accusations he says do “not stand up to facts.”

Regarding “control the internet” through the JTI project, Deloire says it’s “to motivate platforms to favor transparent sources in order to reduce the impact of disinformation in the world.”

As to the accusation of “JTI project excludes Chinese and Russian media,” Deloire states that the platform is open to all media that meets the basic journalism criteria-the journalistic ethics and editorial independence. Whereas, mainland Chinese media are controlled and censored by the Chinese communist regime, and are defined by the regime as the mouthpiece of the ruling Chinese Communist Party.

For the accusation that “RSF’s aim is to ‘attack China,'” Deloire says it’s a “conspiratorial theme is regularly taken up by the Chinese regime’s propagandists.” He pointed out, “RSF is very critical of the actions of the current Chinese regime, which tries by all means to control information within and outside its borders and threatens press freedom around the world.”

As to “being unfair by including China at the bottom of its Index,” Deloire explains the reason for China being ranked 177 out 180 countries in press freedom in 2021 is “extensive Chinese Communist Party control over professional media, a violent crackdown on non-professional journalists and unprecedented censorship on the internet.”

In the end, Deloire responded to Hu’s name-calling and threats by saying “the Beijing regime only knows intimidation and violence to silence its critics.”