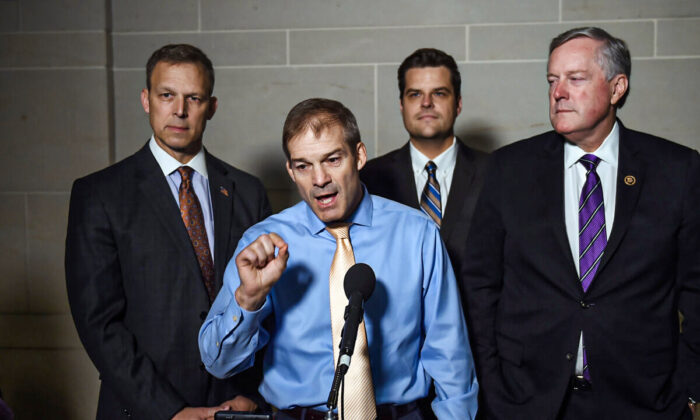 Rep. Jim Jordan (R-Ohio) warned Republicans not to get “overconfident” ahead of the 2022 midterm elections in November, which is widely expected to see a solid GOP victory in the House of Representatives.

President Joe Biden’s first year in office has seen one political and economic controversy after another.

“I think the American people understand that one year of the Joe Biden presidency has been maybe the worst ever,” said Jordan during an interview with Just the News.

“We went from a secure border to chaos.”

At the southern border with Mexico, the United States is facing unprecedented levels of illegal immigration, worsened in part by the administration’s laissez-faire attitude toward immigration law. Foreign nationals from all around the world, not just Central America, have flooded in through the border, creating concerns that the immigration policy could cause national security risks.

“We went from safe streets to record crime,” Jordan said.

In major cities across the United States, crime rates have increased dramatically. In San Francisco, citizens have faced sprees of mass looting that have sometimes gone on for days at a time. In general, violent crime is up across the board, affecting cities from the Atlantic to the Pacific.

Republicans have criticized the administration for not doing enough to combat the rise in crime.

On her podcast, White House press secretary Jen Psaki brushed off concerns over rising crime rates, suggesting that people concerned by rising crime rates are living in an “alternate universe,” stoking criticism from Republicans and pundits.

Jordan also criticized the White House for rising inflation and oil prices, which have both increased at a striking rate over the past 12 months.

“We went from energy independence to the president of the United States begging OPEC to increase production,” Jordan said. “We went from stable prices to a 40-year-high inflation.”

Inflation in recent months has also increased at a rate not seen in decades.

Month after month, inflation has continued to worsen despite efforts to get it under control. Prices for an array of consumer goods have increased dramatically, particularly oil and natural gas.

Fuel prices have also been worsened by Biden’s energy policy, which has significantly reduced domestic production of oil and natural gas, leaving the United States heavily reliant on Saudi and Russian oil.

By contrast, under President Donald Trump, gas prices remained at near-historic lows and the United States achieved energy independence for the first time in decades. Republicans have on several occasions called for Biden to abandon his “un-American energy policies” to increase domestic production to its former highs.

“We … saw the debacle that was the exit from Afghanistan,” Jordan continued.

Biden’s withdrawal of U.S. troops from Afghanistan has been heavily criticized. Documents show that the president hoped to have all U.S. forces out of the country by the 20th anniversary of the 9/11 terrorist attacks, despite warnings from members of Congress and military advisers that the strategy was poorly-advised.

Biden’s decision to move ahead with the withdrawal against advice left hundreds of Americans trapped in what quickly became hostile territory.

In light of these, Republicans are widely expected to do well in the midterm elections this November, particularly in the House elections.

But despite these controversies, Jordan is warning Republican voters that the victory is not in the bag yet, and the Ohio Republican has advised against becoming “overconfident.”

During the interview, Jordan also discussed the House January 6 Committee, a Democrat-dominated body that has faced persistent accusations of rampant partisanship. Only two members of the House Republican caucus—Reps. Adam Kinzinger (R-Ill.) and Liz Cheney (R-Wyo.), both vocal opponents of Trump—are part of the committee, leading other Republicans to denounce them both.

Referencing Cheney and Kinzinger, Jordan said, “We have these two individuals who are now on this January 6 Committee, which anyone with any common sense, with just any basic understanding, can see is a committee that’s totally political with one design: to stop President Trump from running again in 2024.”

If Republicans do take back the House in November, Jordan and Rep. Elise Stefanik (R-N.Y.) have indicated that the GOP will make its own inquiries into the events on the day of and leading up to Jan. 6—particularly Speaker Nancy Pelosi’s (D-Calif.) refusal to approve National Guardsmen despite repeated requests by the Capitol Police chief.