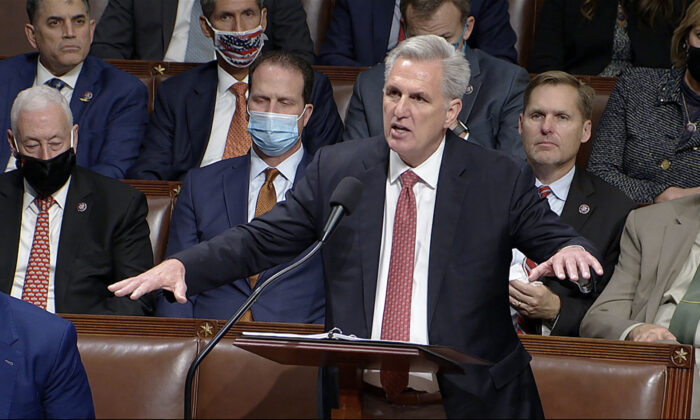 In this image from House Television, House Minority Leader Kevin McCarthy (R-Calif.) speaks on the House floor during debate on the Democrats' expansive social and environment bill at the U.S. Capitol in Washington on Nov. 18, 2021. (House Television via AP)
Republicans

GOP to Look Into Democrats’ Missteps on Jan. 6 If They Take Majority: McCarthy

House Minority Leader Kevin McCarthy (R-Calif.) announced during an appearance on Fox News that if Republicans take back the majority in 2022, the GOP will use its power to look into the missteps of Speaker Nancy Pelosi (D-Calif.) and her appointees ahead of the Jan. 6, 2021, “Stop the Steal” rally.

In July 2021, the Democrat-controlled House authorized the creation of the U.S. House Select Committee to Investigate the January 6th Attack on the United States Capitol in a mostly party-line vote. The committee, which many have accused of being overtly partisan, includes only two Republicans—Reps. Adam Kinzinger (R-Ill.) and Liz Cheney (R-Wyo.)—among its nine members.

Republican critics of the commission say the panel has shied away from looking into events on and before Jan. 6 that could hurt Democrats.

“This partisan sham committee is not focused on answering the most important questions of why the Capitol was left unprepared that day and how we can ensure this never happens again,” argued Rep. Elise Stefanik (R-N.Y.) during a conference call on Jan. 6. “The American people deserve to know what the mainstream media refuses to cover: The fact that the only office that is off-limits to this partisan sham investigation is Speaker Pelosi’s office.”

The Jan. 6 commission, Stefanik said, “is a political weapon, and it’s used to cover up for Nancy Pelosi’s failures.”

The most notable of these failures, GOP critics say, is the role that Pelosi and her appointees had in preparing the Capitol in advance of the event.

Rep. Rodney Davis (R-Ill.), the ranking Republican member on the House Administration Committee, which oversees the security of the Capitol, detailed some of these missteps in a Jan. 3 letter addressed to Pelosi.

According to former U.S. Capitol Police Chief Steven Sund, he requested that National Guardsmen be brought in to ensure that the rally went smoothly. Sund claims that Pelosi-appointed Sergeant-at-Arms Paul Irving rejected the request, citing concerns over the “optics” of bringing Guard personnel into the city.

On another occasion when Sund asked about bringing in the National Guard, Irving reportedly said that “he needed to run it up the chain of command.”

Sund would eventually be forced by Pelosi to resign following the security breakdown on Jan. 6.

Davis wrote that “Chief Sund’s assertions highlight the importance of understanding what direction, if any, Mr. Irving received with respect to the preparations and response to the January 6th violence.”

According to Davis and Stefanik, GOP representatives have made several attempts to gain access to Irving’s documents on Jan. 6, but have been denied.

For months now, Republicans have vowed to look more into the events of Jan. 6 that the Democratic Jan. 6 commission has ignored; Part of that priority, they have made clear, is to gain access to the documents that Pelosi and her appointees have kept under lock and key.

During his appearance on Fox News, McCarthy made clear that it’s very much on the agenda for Republicans if they take back the House.

“Rodney Davis’s letter is correct,” said McCarthy. “When you watch what Nancy Pelosi has done, she’s politicized this process, [by] not getting to the two main questions: Why was the Capitol so ill-prepared that day, and how do we make sure that nothing like this ever happens again?

“What Rodney is asking for here is the communications between the sergeant at arms and the speaker. And, lo and behold, the speaker says, ‘That will not come forward.’

“[Pelosi] is denying the information that can get us to the answer.

While Pelosi and her staff were made aware by Capitol Police that a breakdown of order was possible, McCarthy said, “Never were we warned on the Republican side that this [happening] was even possible.”

“There’s a lot of questions here … that need to be answered,” McCarthy said.

McCarthy then turned to how Republicans could find those answers.

“If we are lucky enough … to take the majority,” McCarthy said, “we will have subpoena power and we could hold people accountable to make sure the Capitol is safe.”

Since the start of the 117th Congress, Democrats have been blasted by Republicans and other critics for their attitude of “one-party rule.”

Since taking control of Congress, Democrats have made several efforts to change or abolish the filibuster to bypass Senate Republicans altogether, have mused about the possibility of packing the Supreme Court, have tried to pass legislation that would federalize elections to Democrats’ advantage, and have censured or pinned contempt of Congress charges on former Trump officials and House Republicans.

McCarthy has vowed for months that Republicans will hit back with the same tactics when they take the majority.

After Democrats censured Rep. Paul Gosar (R-Ariz.) in a party-line vote, McCarthy warned that “What [Democrats] have started cannot be easily undone.”

If they take back the House, the GOP has made clear that party leadership will be willing and able to use the same tools that Democrats have. Under Republican stewardship, the Jan. 6 committee would doubtless explore lingering questions about Pelosi’s involvement and other questions that Democrats have refused to explore.