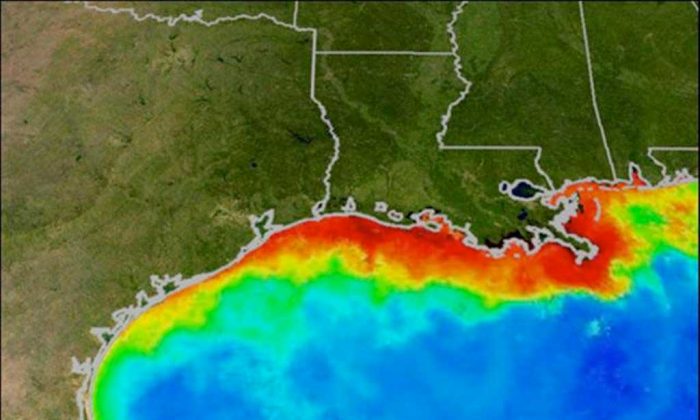 An oxygen-starved hypoxic zone, commonly called a dead zone and shown in red, forms each summer in the Gulf of Mexico. Fish and shellfish either leave the oxygen-depleted waters or die, resulting in losses to commercial and sports fisheries. (NOAA)
US

Imagine a lifeless, oxygen-deprived area in the Gulf of Mexico the size of New Jersey (as much as 8,500 square miles): that’s the record breaking forecast for this year’s dead zone.

While the size is remarkable, the phenomenon is not. Dead zones can occur naturally, but scientists have said that they are greatly enhanced by human activity. An annual consequence of modern agriculture, Gulf of Mexico dead zones are caused by fertilizer runoff and livestock waste swept down the Mississippi River.

Droughts from last year produced one of the smaller dead zones ever recorded (approximately 2,889 square miles). However, this year, record rainfall in the Midwest suggests to scientists that we could see a particularly sizable example.

“The size of the Gulf dead zone goes up and down depending on that particular year’s weather patterns. But the bottom line is that we will never reach the action plan’s goal of 1,950 square miles until more serious actions are taken to reduce the loss of Midwest fertilizers to the Mississippi River system, regardless of the weather,” said University of Michigan aquatic ecologist Donald Scavia in a statement.

Each spring as farmers fertilize the land to prepare for crop season, rain washes some fertilizer (rich in phosphorus and nitrogen) into streams and rivers, and 1.7 million tons of these nutrients are dumped into the Gulf of Mexico every year, causing single-celled phytoplankton to flourish.

Initially, these phytoplankton-dense areas teem with life, as fish and other sea animals feed on the abundance. But the resulting waste from the feeding frenzy produces an enormous amount of bacteria that destroys oxygen in the environment, resulting in a dead zone, a phenomenon scientists call coastal hypoxia.

Fortunately, the dead zone doesn’t last. As winds stir up the water with the arrival of fall, oxygen is restored to the area. But a large and lifeless hypoxic zone off the coast of Louisiana and Texas each summer still hurts commercial and recreational Gulf fisheries.

According to the National Oceanic and Atmospheric Administration (NOAA), coastal hypoxia is proliferating around the world. Despite a national goal to reduce the Gulf of Mexico dead zone to less than 2,000 square miles, NOAA reports that it has averaged 5,600 square miles over the last five years.

Scientists look to changes in a new farm bill to reduce agricultural runoff as the best means to shrink dead zones. No farm bill has passed so far this year, and the dead zone is one of many reasons that a bill is needed.