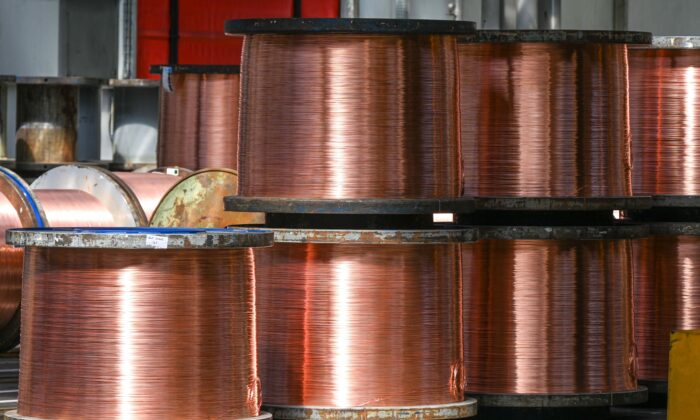 Rolls of copper wires stored at the Nexans manufacture in Lens, northern France, on May 11, 2022. (Denis Charlet/AFP via Getty Images)
Recession

Copper’s projected supply shortage a threat to net-zero 2050, according to study
By Rahul Vaidyanath

Copper’s remarkable second-quarter price decline showed how the prospects of a global recession can overwhelm favourable supply-demand dynamics. The multi-purpose base metal is a priority for Canada although some say depressed prices may slow production.

“The copper price has pulled back after that big run-up to well over US$4.00 [per pound], which I think was driven largely by speculation on increased demand rather than pure supply-demand fundamentals,” Bubar told The Epoch Times.

The fundamentals for copper are much better than its current depressed prices, said Paul West-Sells, president and CEO of Canadian mining company Western Copper and Gold.

“If you look at the fundamentals on copper—the inventory—so the stocks of copper are at incredibly low levels, but the price is dropping just because everyone’s worried about inflation,” he said in an interview with Investing News Network on July 20.

A July 14 study by S&P Global points to a massive impending shortfall in copper. It says copper demand is projected to grow from 25 million tonnes (metric tons) today to about double that amount by 2035; and by 2050 the demand will grow to 53 million tonnes.

Financial markets have been pricing in recession fears across asset classes like stocks and commodities. Copper has been dubbed “Dr. Copper” for what its price action says about the prospects for the health of the global economy.

“Dr. Copper is saying that the economy may be a little bit on the slow side in the future,” Brooke Thackray, research analyst of Horizons ETF Management Canada, told BNN Bloomberg on July 19.

Economists have observed that copper hit a bear market—a price drop of 20 percent from its most recent high—before each of the past four recessions.

One of the world’s largest copper producers, Freeport-McMoRan (FCX), said in its second-quarter earnings release that even though many analysts have been projecting a multi-year period of rising prices, the Q2 decline was “precipitous” due to higher U.S. interest rates, concerns about the global economy, and a stronger U.S. dollar.

“Copper has been the most vulnerable metal entering into a bear market regime,” said TD Securities senior commodity strategist Daniel Ghali on July 5.

But it may have bottomed in mid-July and TD Securities’ updated view from July 22 is that commodity selling is “running out of steam.”

Regardless of the projected future supply-demand dynamics for copper, its prior noteworthy declines have been reliable harbingers of economic slowdowns.

On July 26, the International Monetary Fund (IMF) updated its world growth forecasts and noted that “the outlook has darkened significantly since April.”

“The world may soon be teetering on the edge of a global recession, only two years after the last one,” the IMF stated.

Oxford Economics reported on July 22 that its composite leading indicator of world trade moved into negative territory over the past few months, which implies that goods trade volumes could start to shrink year-over-year in the third quarter.

Another Doubt for Net Zero

Copper, the “metal of electrification,” is the metal of choice for wiring and circuitry and is extensively used in solar panels and the storage and transportation of energy. It is heavily used in Tesla’s all-electric cars.

Copper is thus a vital metal in the net-zero 2050 transition, but S&P Global said that, “unless massive new supply comes online in a timely way, the goal of Net-Zero Emissions by 2050 will be short-circuited and remain out of reach.”

Given the expected shortfall in copper and with China being the “epicentre of world copper,” the study foresees “unprecedented strain on supply chains” and says that “copper scarcity may become a destabilizing threat to international security.”

According to a 2021 report by the International Energy Agency (IEA), around half the global copper supply is extracted in three countries—Chile, Peru, and China—but China processes, including smelting or refining, about 40 percent of the world’s copper.

S&P Global July 2022 study points out that the United States will be importing between 57 and 67 percent of its copper needs by 2035 and that in 2020, Canada represented 22.1 percent of U.S. refined copper imports.

“Canada certainly has the potential. There just hasn’t been much interest in copper exploration with there being so much supply and prices having been depressed. But that is changing now,” Bubar said, adding that the Canadian miners aren’t deterred by the recent sharp price decline in the metal.

The IEA also noted that while “the transition to clean energy means a shift from a fuel-intensive to a material-intensive system,” the amount of minerals needed for solar plants and wind farms, for example, is generally more than their fossil-fuel-based counterparts for construction.

Estimates are that it takes about 15 years to build a copper mine, and the Mining Association of Canada said in a July 18 tweet that “as one of the lowest carbon producers in the world, Canada can play a much bigger role as a trusted supplier in this space.”