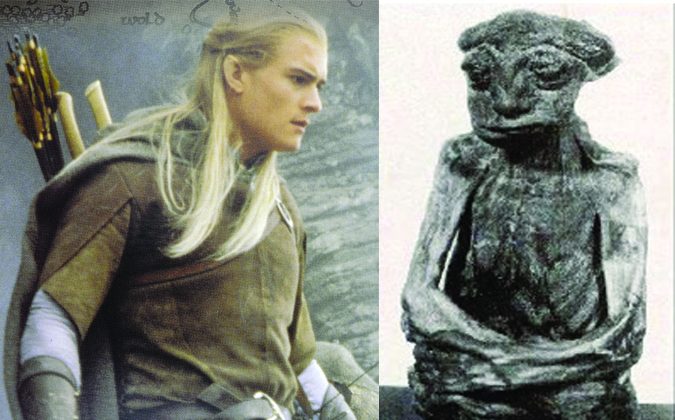 Left: An elven character in “Lord of the Rings,” Legolas as shown on a New Zealand stamp. (Shutterstock*) Right: A mummy found in the Pedro Mountains in Wyoming believed by some to be the remnants of an elf. (Wikimedia Commons)
Beyond Science

If you ask an Icelander whether elves exist or not, chances are he or she will say it is quite possible.

Many polls over the years have shown the majority of Icelanders believe in elves to some degree. Late last year, a judge even halted the building of a road in Iceland because it may disturb elves living in the area.

Myth often has fact as its foundation.

In 2004, the fossils of small humanoid beings were found on the remote Indonesian island of Flores. The being, named Homo floresiensis but better known as the “hobbit,” stood about three feet tall. The journal Nature explains that bones from several individuals were uncovered, showing that it was a society of people this size and not an anomaly.

So are elves more like the tall, lithe, and strong Legolas of “Lord of the Rings,” or more like Santa’s helpers who look like small children? Here are some accounts of elf encounters.

A mummy found in the Pedro Mountains in 1932, thought to be possible evidence of the Nin’ am-bea little people of whom the local Shoshone natives spoke. (Wikimedia Commons)

The Cherokee native Americans spoke of Yunwi-Tsunsdi, which literally means “little people.” The Yunwi-Tsunsdi were described as kind and helpful, barely reaching the height of a man’s knee. The natives of Hawaii spoke of the Menehune, a plentiful race of little people who built cities, fished, and farmed. The Shoshone natives of Wyoming also spoke of little people, the Nin’ am-bea, whom they feared offending. The Nin’ am-bea were known to shoot people with arrows if offended.

In 1932, a mummy was found in the Pedro Mountains, close to where the Shoshone lived. It was examined by the anthropology department at Harvard University and at the American Museum of Natural History. It was originally identified as belonging to a 65-year-old man, though it is just over a foot tall.

The mummy was lost after one of its owners died. Dr. George Gill of the University of Kansas examined x-ray photographs decades later; he said the mummy was likely an infant with a birth defect that caused it to have an adult-sized skull, but remained open to other explanations.

Other people in the Pedro Mountains region have told stories of finding similar tiny mummies, as documented in books about local folklore.

The American Journal of Science published an account in 1837 of a strange discovery in Coshocton, Ohio: “From some remains of wood still apparent in the earth around the bones, the bodies seem all to have been deposited in coffins; and what is still more curious, is the fact that the bodies buried here were generally not more than from three to four and a half feet in length. They are very numerous, and must have been tenants of a considerable city or their numbers could not have been so great. A large number of graves have been opened, the inmates of which are all of this pigmy race. … Similar burial grounds have been found in Tennessee, and near St. Louis in Missouri.”

In 1996, an attempt to bulldoze a hill in Kopavogur, Iceland inexplicably failed. The hill, which was to be cleared for a graveyard, was believed to be occupied by elves. During the operation, two bulldozers inexplicably malfunctioned. Television cameras malfunctioned, unable to focus on the hill.

Elf communicators were called in and apparently were able to reach an agreement with the elves. The elves decided to leave, the communicators said, and the machinery began to work again. The event was reported on by the New York Times.

Hildur Hakonardottir told the New York Times in 2005: “My daughter once asked me, ‘How do you know where elves live?’ … I told her you just know. It’s just a feeling.”

Another Icelander, Vigdís Kristín Steinthórsdóttir, expressed a similar idea in 2011 when a mining operation near her home was believed to be sabotaged by elves.

“I had been [in the mountain] before with other people who sensed the natural beings weren’t content with the disturbances to the ground and they hadn’t been asked to move. We sensed they were sad about it. I wanted for us to apologize,” she told IcelandReview.

A file photo of a  green mangrove forest in Africa (Shutterstock)

Stephen Wagner has been investigating the paranormal for 30 years and has written books on the subject, including “Touched By a Miracle: True Stories of Ordinary People and Extraordinary Experiences.” In an About.com article, he tells of multiple accounts of elf encounters, including that of Paul in South Africa.

In 1986, Paul was hiking near the Mangrove Swamps Nature Reserve with a group of friends.  At around 6 p.m., they came across an open space with rock formations.  Paul told Wagner: “We looked around and witnessed little people sitting on the illuminated rock formations and others who were interacting with each other.”

The experience lasted about 10 seconds, and he estimated there had been 20 to 30 of these little people. Startled, Paul and his friends ran back to the car. They later returned to the same spot and found the lights and rock formations, along with the little people, were gone.

5. A Shimmery Little Person Behind a Tree

Wagner recounts another story, this one from Greenburg, Penn. In 2003, a woman whose name is only given as K.T. was walking in the woods at dusk. The area around her appeared unusually “shimmery,” as she described it.

As she rounded a bend, she came face-to-face with a little elf. It was peeking at her from behind a tree. K.T. described it:  “It was almost a stereotypical elf: long, pointy ears, long funny-shaped nose, very long fingers and pointy cap. It was wearing red clothes and hat, and its skin appeared to be a very light lavender color.”

When she made an exclamation of surprise, it jerked back and disappeared.

Let’s return to Iceland for our final account. Iceland is home to the only Elf School. Located in the capital of Iceland, Reykjavik, the Elf School is a good place to learn all the elf-related stories. The headmaster, Magnus Skarphedinsson, has spent 30 years talking to thousands of people who claim they have encountered the hidden people.

One of the stories he tells is of Elly Erlingsdottir, the head of the  Hafnarfjordur town council’s planning committee. She said some elves had simply borrowed her kitchen scissors and returned them a week later. She was completely confident that this really happened, and a local mystic was often invited to communicate with elves to get their opinions before the committee made decisions.

Andri Snaer Magnason, a well-known environmentalist, spoke to the Huffington Post about the Icelandic belief in elves in relation to development decisions.

When elf advocates were saying the construction of a road from Reykjavik to the Alftanes peninsula would disturb the little people, Magnason’s major concern was that the road would destroy bird nesting sites and have other environmental impacts.

He’s a bit skeptical about elves, but he said: “I got married in a church with a God just as invisible as the elves.”

Numerous accounts beyond those recorded here have been given of encounters with little people, whether with the leprechauns of Ireland or those with other names and slightly varying forms.

Video: From the documentary “The Fairy Faith,” directed by John Walker.