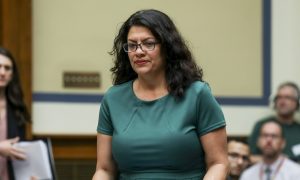 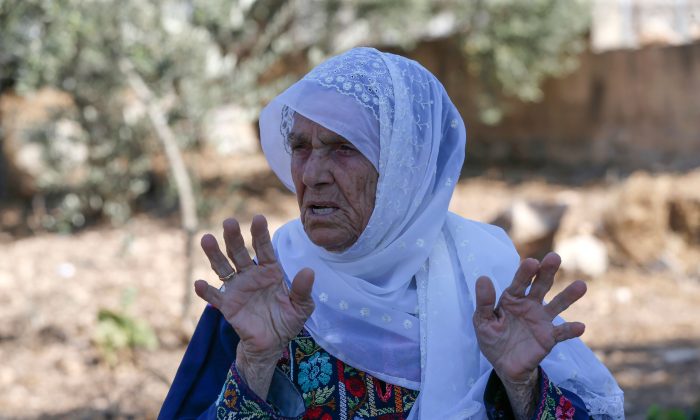 Muftia Tlaib, the maternal grandmother of Rep. Rashida Tlaib (D-Mich.), is pictured outside her home in the village of Beit Ur al-Fauqa, in the occupied West Bank on Aug. 15, 2019. (Abbas Momani/AFP/Getty Images)
Politics

Rashida Tlaib’s Grandmother Reacts to Canceled Trip: ‘I Hope, Inshallah, That She Will Come Back’

The grandmother of Rep. Rashida Tlaib (D-Mich.) said that she still hopes to see her granddaughter after Tlaib abruptly canceled her planned trip to Israel despite being approved for travel by the Israeli government.

After Israel barred Tlaib and fellow Muslim Rep. Ilhan Omar (D-Minn.) from their planned trip, Tlaib promised to avoid promotion of the controversial BDS movement if officials let her travel to the West Bank to see her family, including her 90-year-old grandmother. But hours after officials granted her request, Tlaib said she’d changed her mind and wouldn’t go.

Muftia Tlaib, the grandmother, said that she still hopes to see her granddaughter. She said she thought Israeli officials were the ones that wouldn’t let the lawmaker travel to the homeland of her parents.

“It’s been a long time since I’ve seen her—five to six years. But sometimes I see her on TV and talk with her on the phone. Why didn’t they allow her to come here?” Tlaib told NBC Saturday from the West Bank, which has been held by Israel since 1967 after capturing the land from Jordan during the Six-Day War.

“I can’t do anything. I’m really very sad. I hope, inshallah [God willing], that she will come back. I’m waiting for her.”

Exclusive: Congresswoman @RashidaTlaib’s family reacts to her decision to turn down a humanitarian visa offered by the Israeli government pic.twitter.com/NIyUbI4b15

Muftia Tlaib told Reuters that she hoped God would “ruin” President Donald Trump after the president wrote later Friday that “the only real winner” from the situation was Tlaib’s grandmother.

The grandmother told Fox News on Friday night that she was holding out hope. “I’m going to prepare for her meat and grape leaves and figs. I hope to see her,” she said.

One of Tlaib’s uncles claimed that Israel didn’t want Tlaib to visit because she would witness the reality on the ground.

“They don’t want her to come. They prevent her because they know she’s coming here to see in her own eyes with the delegation the suffering of the Palestinian people and the violations of the occupation on the people’s lives here,” her uncle told Fox through a translator.

Tlaib told UPI that the family told Muftia Tlaib that her granddaughter might not be coming and planned to later tell her that Rashida Tlaib wouldn’t be coming.

“We have only told her that Rashida may not come, so she can get used to the idea. In time, we will tell her that she is not coming. It will be very disappointing for her,” he said.

He said the American lawmaker texted him on Friday, saying, “I am not coming under these conditions.”

Tlaib wrote a letter to Israeli authorities after they announced she and Omar wouldn’t be allowed into Israel, saying a visit might be the last time she would be able to see her grandmother and vowing to “not promote boycotts against Israel during my visit.” Israeli’s interior minister, Arye Deri, approved the request on Friday, but Tlaib said she’d changed her mind.

“When I won, it gave the Palestinian people hope that someone will finally speak the truth about the inhumane conditions. I can’t allow the State of Israel to take away that light by humiliating me & use my love for my sity [grandmother] to bow down to their oppressive and racist policies,” she said in a statement.

Deri responded, saying: “I approved her request as a gesture of goodwill on a humanitarian basis, but it was just a provocative request, aimed at bashing the State of Israel. Apparently, her hate for Israel overcomes her love for her grandmother.”