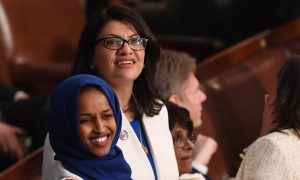 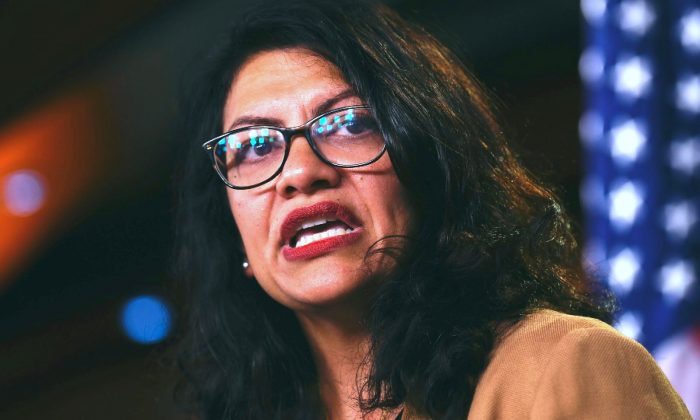 Rep. Rashida Tlaib (D-Mich.) speaks during a press conference at the Capitol in Washington on July 15, 2019. (Brendan Smialowski/AFP/Getty Images)
Politics

Israeli Minister Slams Tlaib After She Cancels Trip: ‘Her Hate for Israel Overcomes Her Love for Her Grandmother’

Israel’s interior minister criticized Rep. Rashida Tlaib (D-Mich.) on Aug. 16 after she canceled her trip to the majority Jewish nation despite being granted permission to travel there so she can visit her grandmother in the West Bank on humanitarian grounds.

“Rep. Tlaib just tweeted that she won’t be coming to Israel. Just yesterday she sent me a letter, asking to visit her 90 year old grandmother saying, ‘it might be my last chance to meet her,'” Interior Minister Aryeh Deri wrote on Twitter on Aug. 16.

“I approved her request as a gesture of goodwill on a humanitarian basis, but it was just a provocative request, aimed at bashing the State of Israel.

“Apparently her hate for Israel overcomes her love for her grandmother,” he added.

I approved her request as a gesture of goodwill on a humanitarian basis, but it was just a provocative request, aimed at bashing the State of Israel. Apparently her hate for Israel overcomes her love for her grandmother.@realDonaldTrump @RashidaTlaib

Deri’s response is the latest in the political saga relating to Tlaib and Rep. Ilhan Omar’s (D-Minn.) plans to visit Israel.

The Israeli government said in a statement of Aug. 15 that it decided to deny entry to Tlaib and Omar, both of whom have been outspoken about their disdain toward Israel, stating that their itinerary “reveals that the sole purpose of their visit is to harm Israel and increase incitement against it.”

“As a free and vibrant democracy, Israel is open to critics and criticism, with one exception: Israeli law prohibits the entry into Israel of those who call for and work to impose boycotts on Israel, as do other democracies that prohibit the entry of people who seek to harm the country,” Israeli Prime Minister Benjamin Netanyahu wrote in a statement.

The two freshman congresswomen publicly announced support for the Boycott, Divestment, Sanctions (BDS) movement, which aims to cut off economic support for Israel.

Following Israel’s decision, Tlaib wrote to Deri, making a humanitarian request claiming that it could be her final opportunity to see her 90-year-old grandmother. In her letter, she promised to “respect any restrictions and will not promote boycotts against Israel during my visit.”

Deri then approved the request on early Aug. 16, in a move backed up by the security minister, according to a statement obtained by the Jerusalem Post.

“The decision to bar entry from the congresswomen was just and correct, because it emerged clearly from their planned itinerary that the purpose of the visit, as it was planned for them, was to continue to support and promote the boycott of Israel,” Public Security Minister Gilad Erdan, said in a statement obtained by the Times of Israel.

“Congresswoman Rashida Tlaib’s request to visit her grandmother should be approved, especially in light of her commitment to honor Israeli law and refrain from promoting boycotts of us.”

But Tlaib, in a statement and series of Twitter posts, announced that she decided not to go despite the approval.

“When I won, it gave the Palestinian people hope that someone will finally speak the truth about the inhumane conditions. I can’t allow the State of Israel to take away that light by humiliating me & use my love for my sity [grandmother] to bow down to their oppressive & racist policies,” Tlaib said.

When I won, it gave the Palestinian people hope that someone will finally speak the truth about the inhumane conditions. I can’t allow the State of Israel to take away that light by humiliating me & use my love for my sity to bow down to their oppressive & racist policies. https://t.co/OYIwExV0ga

“I have therefore decided to not travel to Palestine and Israel at this time. Visiting my grandmother under these oppressive conditions meant to humiliate me would break my grandmother’s heart. Silencing me with treatment to make me feel less-than is not what she wants for me–it would kill a piece of me that always stands up against racism and injustice,” the congresswoman wrote in part in a statement on her website while likely referencing to her vow to comply with restrictions to not promote boycotts of Israel during her visit.

Similarly, Omar has also responded to Israel’s decision to deny the congresswomen entry into the country, accusing Netanyahu of conceding to pressure and insulting “democratic values.”

“It is an affront that Israeli Prime Minister Netanyahu, under pressure from President Trump, would deny entry to representatives of the U.S. government,” Omar said in her statement on Aug. 15.

“Trump’s Muslim ban is what Israel is implementing, this time against two duly elected Members of Congress. Denying entry into Israel not only limits our ability to learn from Israelis, but also to enter the Palestinian territories,” she continued, referring to Trump’s temporary travel ban on people from certain Muslim majority countries deemed by the Obama administration to be “countries of concern.”

It is an affront that Israeli Prime Minister Netanyahu, under pressure from President Trump, would deny entry to representatives of the U.S. government.

Israel’s decision to bar entry to the two congresswomen has received support from various people and groups including President Donald Trump.

Trump had made a post on Twitter on Aug. 15 expressing support for Israel, saying that the country “would show great weakness” if it allowed the two congresswomen to visit.

“They hate Israel & all Jewish people, & there is nothing that can be said or done to change their minds,” Trump wrote on Twitter on Aug. 15.  “Minnesota and Michigan will have a hard time putting them back in office. They are a disgrace!”

In a later post, the president reiterated his claim, saying, “Representatives Omar and Tlaib are the face of the Democrat Party, and they HATE Israel!”

Meanwhile, the Coalition for Jewish Values (CJV), which represents over 1,000 traditional rabbis in matters of public policy, commended Israel’s decision to refuse entry to the two congresswomen.

“Besides the fact that they requested no meetings with Israeli officials, wishing only to travel to ‘Palestine,’ these are not people who would be convinced by seeing ‘the facts on the ground,’” CJV Vice President Rabbi Yoel Schonfeld said in a statement emailed to The Epoch Times. “Omar says that Israel’s careful self-defense is ‘hypnotizing the world’ regarding its ‘evil doings,’ and that her colleagues only support Israel due to being bought out. Tlaib rewrites Middle Eastern history to claim that Arabs gave Jews a ‘safe haven’ at their own expense.”

“Both are sponsors of a resolution claiming that boycotting Israel is ‘pursuit of civil and human rights’ while comparing Israel to Nazi Germany. Their hatred will not be cured by meetings with the Palestinian Authority, which generously supports those who murder Jews,” he added.

According to Netanyahu’s statement, Omar and Tlaib’s Israel trip is sponsored by Mitfah, a group seeking to “promote the principles of democracy and good governance within various components of Palestinian society” and “contribute to the building of a democratic State of Palestine,” according to its website.

The group has advocated against Israel multiple times and has indicated support for the BDS movement.