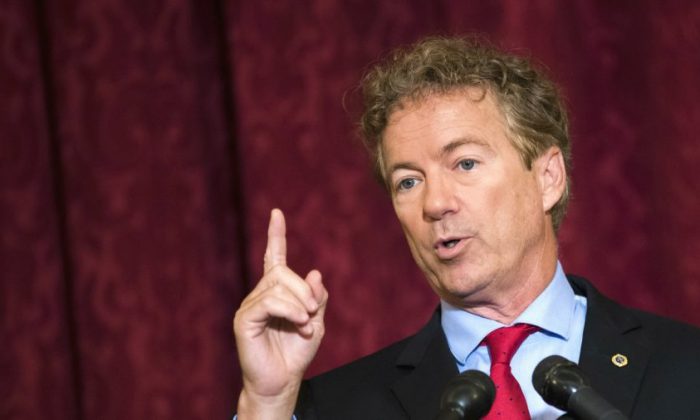 Sen. Rand Paul (R-K.Y.) announced over the weekend that he will vote against President Donald Trump’s declaration of a national emergency at the border, siding with Democrats despite ample evidence of a border crisis.

“I would literally lose my political soul if I decided to treat President Trump different than President Obama,” he wrote in an op-ed published on March 3.

Paul said he supports Trump in general and believes Congress should have given the administration additional funding for the southern border wall but that he doesn’t support the national emergency declaration.

“I think he’s wrong, not on policy, but in seeking to expand the powers of the presidency beyond their constitutional limits. I understand his frustration. Dealing with Congress can be pretty difficult sometimes. But Congress appropriates money, and his only constitutional recourse, if he does not like the amount they appropriate, is to veto the bill,” he said.

He joined Republican Sens. Lisa Murkowski (Alaska), Susan Collins (Maine) and Thom Tillis (N.C.) in announcing his intention to vote against the declaration.

Paul did not address whether he believes the crisis at the border is a national emergency. Instead, he said the two issues are legal ones.

“First, does statutory law allow for the president’s emergency orders, and, second, does the Constitution permit these emergency orders?  As far as the statute goes, the answer is maybe—although no president has previously used emergency powers to spend money denied by Congress, and it was clearly not intended to do that,” he said.

“But there is a much larger question: the question of whether or not this power and therefore this action are constitutional,” Paul continued.

Paul cited the Supreme Court’s ruling on Youngstown Steel in 1952 and said he thinks the national emergency declaration isn’t constitutional because it goes against “the will of Congress.”

“Some are attempting to say that there isn’t a good analogy between President Obama’s orders or the Youngstown case. I disagree. Not only are the issues similar, but I think Youngstown Steel implications are even more profound in the case of emergency appropriations,” Paul wrote.

“We spent the last two months debating how much money should be spent on a wall, and Congress came to a clear conclusion: $1.3 billion. Without question, the president’s order for more wall money contradicts the will of Congress and will, in all likelihood, be struck down by the Supreme Court.”

Legal experts are divided on whether Trump’s emergency declaration will hold up.

According to Harvard professor John Yoo, Trump has the power to declare an emergency at the border, especially because Congress in 2006 passed a law approved by Democrats and Republicans authorizing the construction of a wall.

In Dames & Moore v. Regan (1981), Yoo wrote, the Supreme Court “found that when Congress broadly delegates a general power to the executive branch in the area of foreign affairs, such as the power to impose economic sanctions, it would not read Congress’s neglect to grant a more specific, related authority as foreclosing the president from exercising that authority.”

He added, “Instead, it would treat Congress’s silence as acquiescence to presidential initiative, especially in times of emergency. That is exactly the case here: Congress has authorized a wall and other security measures at the border, it has not passed any law forbidding such a wall, and the president has invoked delegated powers to continue the wall’s construction.”

The president acknowledged the declaration would be fought by different groups, as all of his actions are. Announcing the declaration on Feb. 19, he said he thinks the nation’s highest court will uphold the declaration, which garnered up to $8 billion for the southern border wall.

You will find more infographics at Statista.

Four environmental groups sued Trump and others over the declaration.

A resolution that would terminate Trump’s declaration was passed in the House on Feb. 26 by a vote of 245-182 and with Paul’s vote and several other Republican defections, could pass in the Senate. Senate Majority Leader Mitch McConnell (R-Ky.) said on Wednesday that he planned a vote on the measure within three weeks.

But Trump said he’d veto the resolution if it passed both the House and Senate and both houses would have to have a two-thirds majority supporting the resolution to override a veto.

“We have too many smart people that want border security, so I can’t imagine if it survives a veto, but I will veto it,” Trump said. “Everybody knows we need border security. We need a wall. I think it’s a very bad subject for the Democrats. We need a wall. We’ve apprehended more people than we have in many, many years. … With a wall, we wouldn’t even have to apprehend them.”