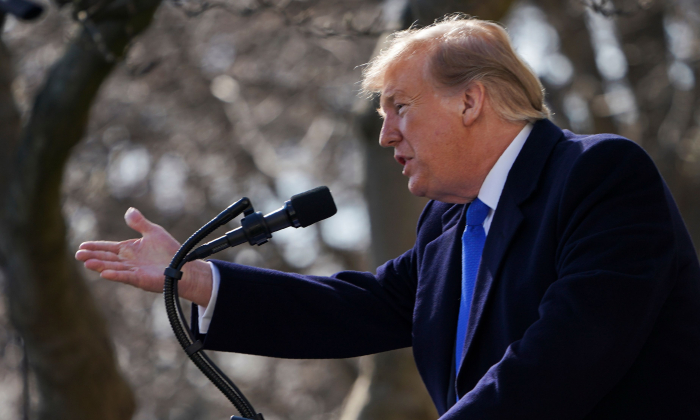 President Donald Trump gestures as he answers questions in the Rose Garden at the White House, on Feb. 15, 2019. (Brendan Smialowski/AFP/Getty Images)
Trump Administration

President Donald Trump declared a national emergency on Feb. 15 to address the humanitarian crisis on the southwest border and secure funds for border-wall construction. The emergency declaration, combined with a spending bill passed by Congress on Feb. 14, will provide his administration with $8 billion for wall construction, the president said.

Director of the Office of Management and Budget Mick Mulvaney told reporters on a conference call on Feb. 15 that with the emergency declared, the administration will shift $600 million from the Treasury Department, and $6.1 billion from the military budget for border-wall construction.

The president pointed out that drugs, gangs, and illegal aliens are pouring into the country, necessitating the need to declare a national emergency.

“We’re going to confront the national security crisis on our southern border and we’re going to do it one way or the other. We have to do it,” Trump said at the White House. “We have tremendous amounts of drugs flowing into our country, much of it coming from the southern border.”

Congress passed a $333 billion spending bill on Feb. 14 that includes $1.375 billion in funds for the construction of a border wall. The amount is far short of the $5.7 billion Trump demanded last year. Three weeks ago, the president promised to use executive powers if lawmakers failed to secure the funds he asked for.

The $6.1 billion in funds to be drawn from the Department of Defense budget includes $2.5 billion that will be reallocated from the counter drug activity purse and $3.6 billion from the military construction budget.

Trump underlined that national security declarations are a common practice, with 31 already in effect as he spoke. Trump said that his administration will use an emergency declaration signed by President Barack Obama to combat drug cartels. Trump nevertheless expected to be sued. He was optimistic that the Supreme Court would ultimately uphold the declaration.

Several “angel moms,” women whose children or husbands have been killed by illegal aliens, attended the president’s announcement.

Since taking office, Trump has demanded that Congress fund construction of a wall on the southern border, his landmark campaign promise. Democrats, whose votes are needed to reach a 60-vote threshold in the Senate, have thwarted all attempts. Last year, the president followed through on a promise and refused to sign a spending bill that did not include funds for a border wall. As a result, Congress missed a deadline to fund the government, triggering a partial shutdown in December last year. The shutdown stretched on for 35 days, the longest on record.

On average, approximately 2,000 illegal aliens enter the United States on a daily basis, according to the White House. Many of those who enter have criminal histories or are gang members. Cartels are taking advantage of the porous border to smuggle vast amounts of drugs into the country, contributing to an already devastating opioid crisis. Meanwhile, some 10,000 children are trafficked across the border every year to be sold as sex slaves.