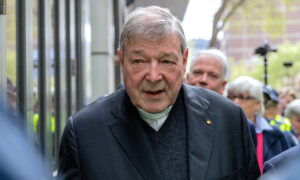 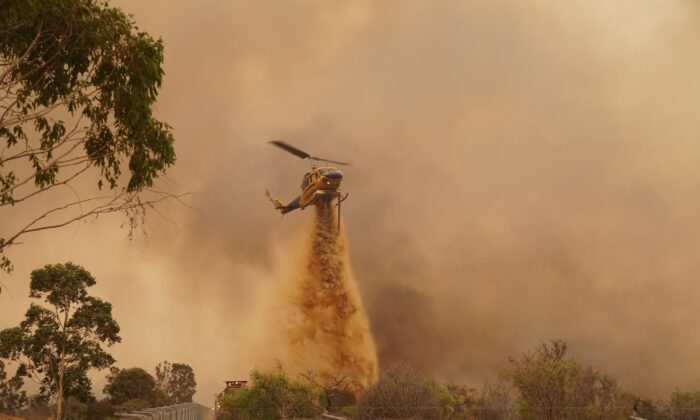 An aerial Firefighting helicopter drops fire retardant in an attempt to contain a bushfire in Wooroloo in Perth, Australia on Feb. 2, 2021. (Evan Collis/Department of Fire and Emergency Services via Getty Images)
Australia

Rain Due After Tough Night for West Australian Fire Fighters

PERTH, Australia — Firefighters are hoping for weekend rain in Western Australia (WA), with the number of homes destroyed by a devastating bushfire in the Perth Hills rising to 86.

Hopes are high that forecast weekend rain will help firefighters get on top of the week-long blaze as a tropical low tracks towards the southwest.

But weary firefighters are expected to face their toughest challenge, with conditions forecast to worsen before they get better.

“We are expecting incredibly strong winds—stronger than we’ve had already—tomorrow ahead of that tropical low,” Department of Fire and Emergency Services Commissioner Darren Klemm told reporters on Friday.

“At this time, we’re being advised that we will see rain on or about the fire ground at approximately 11 a.m. (on Saturday). But between now and then, we have still got the challenges of these really strong winds.”

People bound by Clenton Road, O’Brien Road, and Ewing Road have been warned there is still uncontained fire activity, and should leave now if they intend to do so and the means of exit are clear.

The fire has burned almost 11,000 hectares in total.

Efforts to allow some residents to return home are continuing with areas east of Toodyay Road opening up from 4 p.m. on Friday.

Roads including the Great Northern Highway and Railway Parade have reopened, while speed restrictions on the Tonkin Highway have been removed.

Firefighters have worked overtime to clear damage from seriously affected areas, including fallen powerlines, while also dealing with flare-ups on the northern flank of the bushfire and re-establishing containment lines.

“You must shelter before the fire arrives as the extreme heat will kill you well before the flames reach you,” the DFES said on Friday.