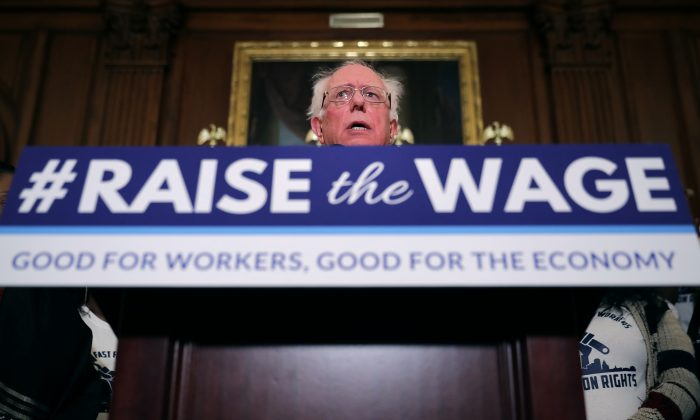 Sen. Bernie Sanders (I-VT) speaks during an event to introduce the Raise The Wage Act in the Rayburn Room at the Capitol, Jan. 16, 2019. Chip Somodevilla/Getty Images
Viewpoints

Relatively speaking, Pennsylvania is late to the game. Twenty-eight states and the District of Columbia already have a minimum wage higher than the federal minimum of $7.25 per hour. Obviously, raising the minimum wage has been a popular idea. But has it been a good one?

Even so-esteemed a progressive as former California Gov. Jerry Brown conceded that raising the minimum wage has its problematical aspects. In his words, “Economically, minimum wages may not make sense, [but] morally and socially and politically [they do].”

1. They Hurt the Poor

A central teaching of Christianity is compassion for the poor. The economic effect of raising the minimum wage is twofold: Minimum-wage workers fortunate enough to keep their jobs and hours enjoy increased income; those whose hours are reduced or who get laid off or who don’t even get hired in the first place, due to the higher wage, are made worse off, some (according to longitudinal studies) for life. Minimum wage laws are cannibalistic; they confer a marginal benefit on some poorer Americans at the expense of inflicting major economic damage on others. That is an odd sense of justice and compassion. What is so moral about a law that hurts tens of thousands of innocent poor people?

Higher minimum wage laws disproportionately hurt racial minorities. Economist Walter Williams documented this in his 1982 book, “The State Against Blacks,” and I updated some of Williams’ data last year when I pointed out that the federal minimum wage law is of dubious constitutionality, in light of the Supreme Court’s 2015 Texas Department of Housing case condemning policies with disparate racial impacts. Religious leaders who extol the importance of morality and economic justice need to ask themselves if they really are morally superior for advocating a policy that is so disproportionately damaging to racial minorities.

A spokesperson for the National Council of Churches explained his support for higher minimum wage laws thusly: “I think we are bound to Jesus’ command to love your neighbor as yourself; I would want for another person to enjoy the kind of security and life that I have.” Well, that is a sweet sentiment, and the good news for this person is that he is completely free to offer employment to as many people he wants at whatever wage he thinks his employees deserve or need. But what gives anyone the right to insist that other people be compelled to pay more for workers?

When the law sets the minimum wage higher than the monetary value that their employees’ labor produces, not only do some workers suffer layoffs or reduced hours, but sometimes, the employer is forced to close the business and lose that source of income. Employers are our neighbors, too. Jesus didn’t teach that the way to love our neighbor is to inflict harm on some of our neighbors.

4. They Force Someone Else to Pay

The Christian model of charity is the Good Samaritan, who used his own assets to help his neighbor rather than trying to get someone else to foot the bill. Religious leaders need to beware of the liberal temptation to want good for others, as long as they can make somebody else pay for it. That is the moral hollowness of minimum wage laws—forcing somebody else to pay for a worthy goal that you desire.

5. They Are Legal Theft

Few people would assert that it’s moral for government to pass a law requiring them to pay $15,000 for a car with a market value of $13,000. Such a law would violate two of our most fundamental, God-given rights: our liberty—the right of two people to enter into a mutually agreeable contract—and our property rights, to the extent that the law extracts additional money from the buyer. Using the force of government to make a person poorer is no more moral than when a thief takes the money. The only difference is that the former is legal theft while the latter is illegal.

In a market economy, if a worker isn’t content with the wages paid for doing a certain kind of work, the wage is a market signal that tells the worker to switch to a job that society values more highly. (We can tell someone values the work more highly because the job pays a higher wage.) When government mandates higher pay without a commensurate increase in value produced by the worker, it essentially tells the worker that he doesn’t have to improve, and that he has no social obligation to find a way to deliver more value to his fellow man.

Minimum wage laws implicitly convey the morally corrosive message to low-skilled workers that they have no responsibility to improve themselves and do more for their fellow citizens. In this way, minimum wage laws become a subtle enabler of stagnation. They falsify the market signal (the price of labor) that can spur people to more fully develop their God-given potential. This is not a loving, moral thing to do to one’s fellow man.

Finally, too many religious people fail to grasp the underlying Christian ethos of the free market. In the social division of labor that develops in a free society based on private property, the price system rewards each of us for providing something of value to others. The free market rests on voluntary contracts and exchanges that each party freely enters into because each values what is being received over what is being sold. This system of reciprocal benefits is the most economically effective and ethically just way to bring about economic progress and uplift the poor. It is the moral and Christian way—the only way that doesn’t resort to forcibly taking from one to give to another.

The next time a politician glibly asserts that it is moral for government to mandate a higher minimum wage, don’t be afraid to push back.