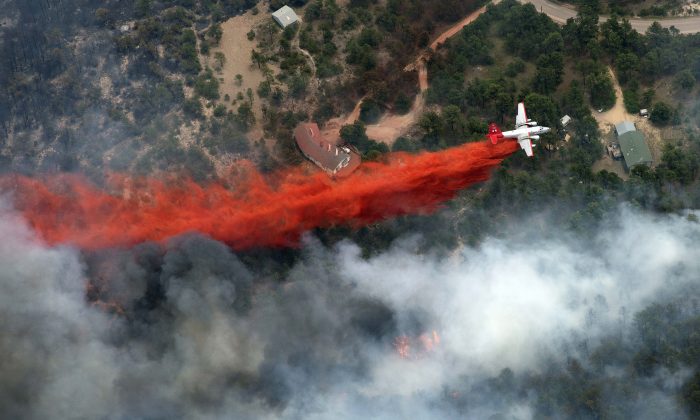 An aircraft lays down a line of fire retardant between a wildfire and homes in the dry, densely wooded Black Forest area northeast of Colorado Springs, Colo., Thursday, June 13, 2013. The fire is being called the most destructive in Colorado history. (AP Photo/John Wark)
Colorado Wildfires

Q & A: What’s Going on with the Wildfires in the US?

Large fires have been burning in multiple states for multiple days in the western United States, including the large Black Forest fire, which has spread to 15,000 acres and forced tens of thousands to evacuate.

So what’s the deal with all the fires? Take a look.

Where are the fires currently burning?

Four days ago, fires were burning in 8 western states: Arizona, California, Colorado, Idaho, Nevada, New Mexico, Oregon, and Washington. As of June 16, many of the fires have been almost or fully contained.

Where are the worst fires?

One fire stood out among the rest: The Black Forest fire, in Colorado north of Colorado Springs, which at one point spread to 15,000 acres. The fire destroyed at over 400 homes and forced over 40,000 people to evacuate, but fire crews are starting to gain much ground and the fire is 65 percent contained. Because of the widespread damage, the fire is being called the most destructive in Colorado history.

Three other fires burned a lot of acreage but never posed much of a threat to homes or people.

Two of these are burning in New Mexico. The Thompson Ridge Fire, has been burning for over a week after being started by a downed power line. The fire has burned almost 24,000 acres but is mostly burning in wilderness, in the Santa Fe National Forest and in the Valles Caldera National Preserve. This fire is also 80 percent contained as of June 16.

The Silver Fire, also in New Mexico and 6 miles west of Kingston in the Gila National Forest, has grown to 22,500 acres and is only 5 percent contained. Fire crews have been working on keeping Kingston’s historic buildings safe while the 25-45 residents of the former silver mining town have evacuated.

Another fire, in eastern Oregon, was the result of two fires combining to burn about 20,000 acres, but was fully contained several days ago.

Two people have died from the Black Forest fire; No other deaths have been reported.

Are these types of fires normal for this time of year?

The recent unusually warm weather will cause the fire season to start earlier than normal. In the western United States, wildfires are more dangerous during the summer and fall compared to wildfires in other parts of the country. Most importantly, wildfires are happening more often and burning bigger because of increasingly worsening conditions, according to experts.

For 2013, a higher level of wildfires than usual was predicted for parts of the western U.S. by the Predictive Services Unit at the National Interagency Fire Center, including above normal wildland fire potential in New Mexico, California, Oregon, Arizona, and Colorado.

Global warming is identified as a cause of the increasing danger.

“The last 10 years of fire history that we’ve had in the United States have kind of redefined what fire is,” she said. “Average or normal is kind of a moving target.”

Dan Ware, of the New Mexico forestry agency, told Think Progress that the current conditions in New Mexico are a “historic drought.”

Also, the U.S. Department of Agriculture found that wildfires in the United States will be at least twice as destructive by 2050, burning around 20 million acres each year.

What’s going to happen next?

All of the fires are pretty well contained as of June 16, but some, especially the Black Forest Fire, are requiring crews to go around the area and make sure there’s no hot-spots left.