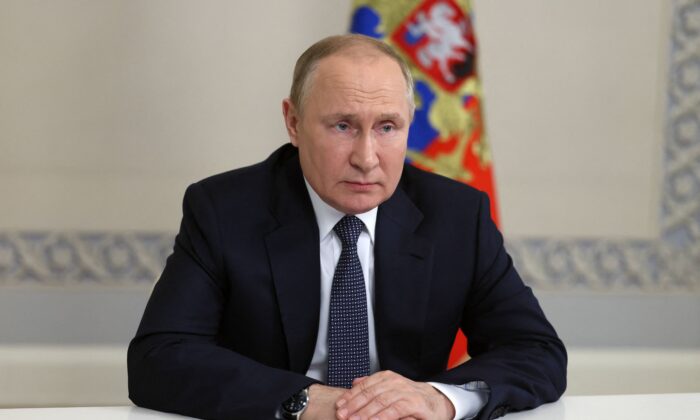 Russian President Vladimir Putin chairs a meeting with members of the Security Council via a teleconference call in Moscow on June 22, 2022. (Mikhail Metzel/Sputnik/AFP via Getty Images)
Business Columnists

I’ve been rather baffled on the rhetoric of the Biden administration concerning the current rampant inflation. In mid-June, President Joe Biden concluded that “Putin’s price hike is hitting America hard”.

But is this a fair call?

A first answer can be drawn from the monthly pace of annual inflation in the United States.

It’s rather obvious from the figure that inflation was running rampant way before President Vladimir Putin decided to attack Ukraine. Some could even infer that the pace of the increase of inflation has actually slowed after the onset of the Russo-Ukrainian war. This, naturally, would be just statistics playing tricks with our heads.

The thing is that the roots of this inflation crisis go way back before the war. We wrote in the March 2021 issue of our Q-Review series, when we warned of the coming inflation shock, that:

“While many argue that the devastating blow of the pandemic and ensuing lockdowns have been deflationary, in reality the opposite has occurred.

“People have not flown, for example, but instead stayed home and ordered a variety of different goods online. Because inflation gauges consist, essentially, of a broad assortment of goods and services weighted by average consumption patterns and preferences, they are likely to misreport true inflation rates if consumption patterns and preferences abruptly change—as has now occurred.”

“So, inflation has been running higher than shown in the official figures, but the real problems are likely to emerge when economies re-open and conditions move towards a ‘new normal’, which is now occurring in the U.S. Airlines, hotels, restaurants, etc., now have diminished capacity, which means that they may be unable to meet suddenly increased demand. And the prices for services may see a sudden uptick which, combined with the already fast-increasing price of commodities, could lead to an abrupt and unexpected rise in the inflation rate when economies are operating more fully.”

This was our warning that an inflation shock would be about the hit the United States, and the world, which, unfortunately, went mostly unnoticed. However, the roots of the inflation crisis can be traced back much further than the coronavirus outbreak.

As I detailed in my previous column, central banks have flooded the world economy with newly created money, or central bank credit, through their programs of quantitative easing or QE. During the “coronavirus bailout” of the central bank, during the spring of 2020, this led to phenomenal growth in the supply of broad money, or M2 money, which had already grown rather relentlessly since 2008 after which central banks started their QE-programs.

Basic inflation dynamics are not complex. When you increase the amount of money in circulation with respect to products and services (effectively what gross domestic product measures), there’s more and more money chasing fewer products and their price starts to rise. This is what central bankers have managed to achieve since the Great Financial Crisis. In such an environment, all that is needed for inflation to ‘flare up’ is some lasting shock or a disruption in the supply side (like an oil shock or lockdowns).

So the roots of this inflation crisis go well past the ‘quirks’ of an authoritarian Russian leader. However, this is not to say that the war could not have a devastating effect on the economy. In the June world economic outlook of our Deprcon Service, we concluded that:

“The war has naturally made everything worse, and it has effectively ensured that inflation will not come down any time soon.”

We also warned our customers on the looming shortages:

“What worries us the most are the looming shortages of energy, raw materials and commodities. This is a direct result of the Russo-Ukrainian war and sanctions on both sides. During the coming fall/winter/spring, they may wreak havoc in manufacturing, construction and food chains. If wide-spread shortages appear, they would have a highly instabilizing effect on economies and societies across the globe.”

Alas, while the Russo-Ukrainian war (Putin) did not create this inflation crisis (or “price hike”), it and especially sanctions related to it may create a much bigger problem, namely widespread shortages. Most of us living in western countries know nothing of such things. The last time there was anything even remotely resembling a famine in western countries, outside world wars, was the Great Depression of the 1930s.

In the 1930s, the ‘dust bowl’ accompanied the deepest economic malaise ever encountered by a western nation. The Great Depression was actually a global banking crisis. Over 9,800 banks, nearly 40 percent of the total, failed between 1929 and 1934 in the United States. Several European banking giants, including Austrian Credit Anstalt and German Danatbank failed, with several nations experiencing full-blown bank runs.

This time around the developing financial crisis threatens us all.

From henceforth, preparation in all forms is the key, as we may not be facing just an economic collapse, but also serious, possibly industry-crippling shortages.

Tuomas Malinen
Follow
Tuomas Malinen is a CEO GnS Economics, a Helsinki-based macroeconomic consultancy, and an associate professor of economics. He studied economic growth and economic crises for 10 years in the academia. His newsletter, dealing with forecasting and how to prepare for the recession and approaching crisis can be subscribed here.