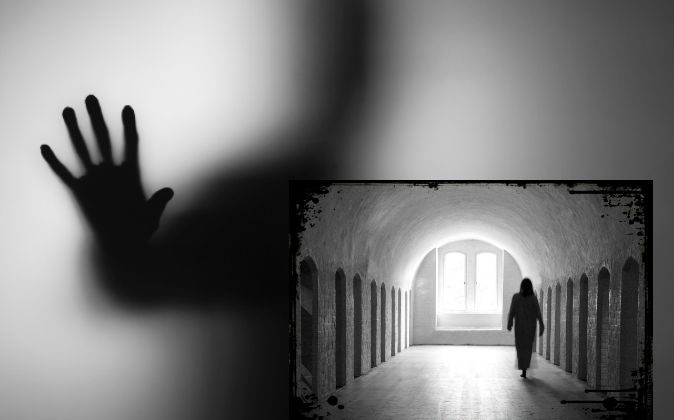 Peter Sacco is a psychologist who writes on a variety of topics, including haunting, spirit possession, and poltergeists. He has a unique perspective as both a psychologist and an investigator of these strange phenomena.

He is based in the Niagara Falls region, on the Canadian side in a city called St. Catherines. The region is arguably one of the most haunted places in North America, he said, giving him plenty of incidents to investigate close to home. Sacco is a criminal psychology professor, host of a TV show titled “Niagara’s Most Haunted,” and author of the recently published his book “Paranormal Niagara: Cases of the Mysterious and the Macabre.”

First, we’ll briefly summarize a famous incident featured in his book. Then, we’ll share a Q&A in which Epoch Times asked Sacco how he understands the psychology of the people who report these phenomena, the other witnesses, and even the ghosts themselves, should they actually exist!

A Poltergeist, a Police Officer, and a Priest

In February 1970, a poltergeist in St. Catherine’s attracted even the attention of Johnny Carson, who mentioned it on “The Tonight Show.”

Hearing loud banging on the walls in an apartment prompted many neighbors to call the police. Multiple police officers visited the house to find something altogether different from the domestic dispute they expected.

Sacco interviewed the officers, including Bob “Scotty” Crawford who became the primary officer handling the case. They witnessed many strange things.

Crawford saw the little boy of the family who lived there sitting in a chair that seemed to rise off the ground of its own accord and fly across the room. Another time, two officers called to the apartment saw the boy pinned to the ground by a chair. When one of the officers tried to pull it off, he found it stuck there with an unnaturally strong force. He couldn’t remove it. After a few minutes, it came off of its own accord.

Then a plate flew across the room, seemingly tossed by an invisible hand, right at the officer’s head. The officer dodged it, luckily, and hastily left with his partner, saying whatever was happening in the apartment wasn’t something the police could handle.

Priests came to the house. The first priest to come had a chair hurled at his legs like a bowling ball aimed at a pin. After the priests spent some time at the apartment, the problem seemed to dissipate.

Crawford also described a time “The boy was sitting on the lap of an adult and something was ‘trying to rip him away.’ A couple of officers tried to hold the kid down while this was all taking place. It was like something more than superhuman was trying to tug the kid away.” Crawford said he was sure the boy was not faking any of it. His body and other objects were acted upon with such suddenness and force. Some events, such as a levitating couch and bed couldn’t be explained. They’d investigated other possible sources of the noises in the walls, including the heating system and animals such as mice, and ruled them out.

Poltergeists are thought to perhaps be the result of psychokinesis. The person at the center of the phenomenon, in this case the little boy, may unintentionally manifest a psychological state in physical surroundings. Learning to control the psychokinesis could remedy the situation in these cases, said Sacco.

Epoch Times: A stigma around these phenomena may stop many people from discussing them. Yet the police in this story took the poltergeist seriously and openly discussed it as a supernatural phenomenon. Do you have any comments to make on the group psychology at play in these situations, either in terms of fear of acceptance from the group or how multiple people may share the same hallucination/delusion?

Sacco: First of all, teaching criminal psychology and having worked with police for many years myself, I do know one thing: cops will never sign their name to anything like this, because they’re the first ones that won’t believe in this stuff, usually. … So when I got several cops telling me that this is exactly what happened—first of all, what do they stand to get from this? … There were too many eye witnesses.

I had one person suggest it was mass-hysteria. When you’ve got different cops from different departments going in there, I don’t buy into cops being easily mass-hypnotized or buying into this mass hysteria, because it just doesn’t work that way.

[If that were the case,] why aren’t cops all mass-hysterical about UFOs when they get a report? …

You had very unique cops … they all came from different backgrounds, different belief systems in terms of religion, and you also had a crown attorney (equivalent to a district attorney in the United States), who had nothing to do with these cops. He walked into the place … and he’s watching a couch with three adults sitting on it floating off the ground … and he got out so fast, it wasn’t even funny. …

To meet them in person and to see the looks on their faces and how they describe it … it says a lot. So I believe what they saw, totally.

Epoch Times: Some people who believe in ghosts say they are spirits with unfinished business or strong attachments to life, et cetera. If ghosts really are present in reported haunting cases, do you have any insights into the psychology of the ghosts themselves?

Sacco: When I spoke to people who are really experts in the field, the parapsychologists and such, I get a couple of answers. One of them is, because we live in an area that was tragically hit by wars—the big War of 1812, a lot of tragic deaths—some of these spirits don’t even know they were killed. Some of these spirits were snatched so fast from this dimension that they still think part of them is still here. …

Others said it’s energy, residual energy, like a photographic Polaroid. Once a person is active in a certain place, they emit this energy, and the energy has been fixated in time, if you want to call it the ‘universal ether’ … certain people can see it.

For example, some people can see auras … I’ve never met a person that can 100 percent deny that auras exist. If I point up at the moon and I see a ring around the moon, and that’s energy being emitted, what is that called? That’s an aura. … Auras exist, because all it is is heat given off.

Epoch Times: Could spirit possession really be at the root of some mental illnesses as many have believed throughout history?

Sacco: I would absolutely have to say, ‘yes’ to the possibility it could happen in select cases. I think you need to kind of keep an open mind. Let’s be realistic, we don’t know everything. … Even if you pick the Big Bang as the theory of creation, who started the Big Bang? … You’re back into this domain of the unknown.

I like to think that before this world existed, there was an unknown mind, creator, entity, God. I believe that you have to definitely look at the possibility that there are such things as demons or other entities, whatever you want to call them, within this unknown world.

Epoch Times: Some, and even many, of the reported paranormal cases are thought to be fraudulent. What psychological factors would cause someone to fake it?

Sacco: Some people, if they were faking it, may have what’s called Münchausen by proxy syndrome or Münchausen syndrome.

It could be done first of all for attention seeking. … it’s going to give them a sense of people caring for them. It’s like what’s called feigning, where somebody would make up illness just to get out of responsibility for something, or to get attention … or to gain something, like in an insurance scam. … It could be just because [the person is thinking], ‘I’m living in an apartment here, I don’t want to pay rent, I hate the place. I can’t get out of my rental agreement, therefore I’m going to create a poltergeist.’

… It could be a joke, it could be for giggles, they’re just trying to play somebody.

Epoch Times: As a psychologist, you’re in a position to assess people’s mental health. As an author and television host who publicly discusses these strange phenomena, you probably have many people telling you their experiences. Are there some indicators that help you determine whether a story is more or less genuine?

Sacco: There has to be some sort of level of credibility—the person telling the story has one or more witnesses, or there’s a similar story that can kind of back it up … I’m hoping, too, that there’s some sort of historical significance. …

We use—to be blunt—the stupidity factor.

We were doing a film shoot … where there’s an old flour mill that burned about a hundred or so years ago. People died and people have continually seen ghost flames … and some people have heard screams.

The night we were filming it … I find my camera crew … listening to four drunken people telling them a ghost story. … [One of the people said he has] a haunted boat and the ghost only goes to eat bacon in his fridge.”