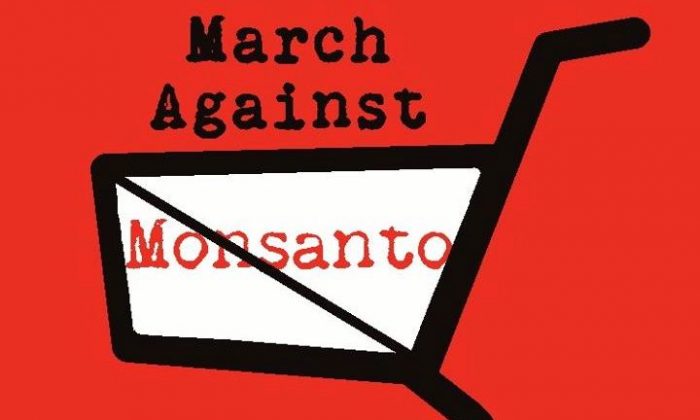 On May 25, 2013, activists from 400 cities around the world will unite for the March Against Monsanto. Facebook RSVPs alone suggest over 2 million marchers. (Logo by Emilie Rensink)
12- OBSOLETE

Protests Against Monsanto in 55 Countries

Activists from 55 countries will participate in a global protest this month against biotechnology giant Monsanto. According to mother-turned-protest organizer, Tami Monroe Canal, the idea was born of frustration.

“The first few months after moving to Utah I didn’t have access to farmer’s markets and the fresh produce that I had out in California,” said Canal. “I became increasingly angry every time I would go to the grocery store and spend a small fortune to ensure I wasn’t feeding my family poison.”

Canal began the project as a Facebook page on Feb. 28, and says her anger was sparked by California’s Proposition 37 campaign to label genetically modified organisms (GMOs). The measure failed, but the fight gave her a clearer picture of GMOs, Monsanto, and the food manufacturers who spent $45 million to defeat the initiative.

“Prop 37 really opened my eyes to what GMOs truly are and how damaging they can be to human health,” Canal said. “I just couldn’t in good conscience feed my family that anymore.”

Consumers don’t buy products directly from Monsanto, but the company’s biotech corn and soy dominate the American market. The protest encourages people to join a growing boycott of companies likely to use GMOs—including Kellogg’s and General Mills—as a way to change the system.

Anonymous endorsed the upcoming event, but organizers say most of the people involved in the march have never been to a protest before. According to Canal, people from all walks of life share her frustration.

“Food affects everyone,” she said.

Monsanto has a legacy of controversial and poisonous products—such as PCBs, Agent Orange, DDT, bovine growth hormone (rBGH), Roundup, and aspartame to name a few. For the past two decades, however, Monsanto’s main focus has been GMOs, and many are concerned that the new food technology threatens human health.

The U.S. Food and Drug Administration (FDA) says that GMOs are safe, but many farmers, doctors, and researchers disagree. Estimates suggest that roughly 80 percent of U.S. food products contain GMO ingredients. With no labels to identify GMOs, Canal says that Americans still need to know that there is cause for concern.

Soon after Canal developed the march and boycott idea, she enlisted the help of seasoned Seattle activist and journalist, Emilie Rensink.

While critics have been speaking out against Monsanto for years, Rensink says that a combination of unpopular policy decisions and social media created just the right conditions for a big demonstration.

“This was kind of the perfect storm,” she said.

Attention for the march picked up speed soon after President Obama signed a budget bill including a measure dubbed the Monsanto Protection Act. However, critics say the recent legislation is only one example of the blurry line between industry and government.

“I think the whole recipe for [Monsanto’s] success is due in large part to the political favoritism that they receive in the United States,” said Rensink. “The FDA is headed by ex-Monsanto executives, and they give them special subsidies over smaller farmers and other farming operations. They are given an unfair advantage in my view.”

Canal points to Michael Taylor, who for the past two decades has bounced back and forth between his job as Monsanto attorney and head of U.S. food regulation.

“It’s a huge conflict of interest for him to be holding the position of power that he holds,” Canal said. “I honestly think going through the government is futile at this point, because the FDA is so embedded with Monsanto.”

While U.S. regulators have shown little concern for GMOs, outside the United States the push back has been much more significant. According to the Non-GMO Project, most developed nations label, restrict, or ban GMOs.

In an email, Monsanto spokesman Tom Helscher said the company had no statement regarding the upcoming protest. However, Monsanto CEO Hugh Grant recently characterized GMO critics as social media elitists who overlook the pressing food problems of the less fortunate.

“There is this strange kind of reverse elitism: If I’m going to do this, then everything else shouldn’t exist,” Grant told Bloomberg in a May 14 interview. “There is space in the supermarket shelf for all of us.”

Monsanto supporters point to the company’s promise to address world hunger with increased crop yields and lower food prices, but critics dispute this claim as well.

In Seattle, protesters will march in front of the Bill and Melinda Gates Foundation to highlight what they consider to be an institution helping to further the GMO agenda.

“Bill Gates has been a large proponent of GMOs as a solution for world hunger,” Rensink said, but studies have shown that GMOs don’t produce higher yields. So the notion that GMOs are somehow able to feed the world is really just an empty assertion.”

The march and rally in Salt Lake City will feature a local Vietnam vet discussing how he lost friends to Agent Orange, a beekeeper speaking about the danger Monsanto pesticides pose to the bee population, and a presentation by Grow Food Not Lawns about self-sustainability, and supporting organic co-ops.

Like other venues around the world, Salt Lake will also feature bands playing protest songs against Monsanto and GMOs.

“We’re trying to keep it a little lighthearted,” Canal said. “But I want people to understand the severity of the issue and realize that it is our time in this nation to stand up to something that is so wrong.”