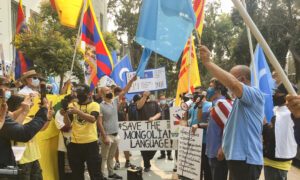 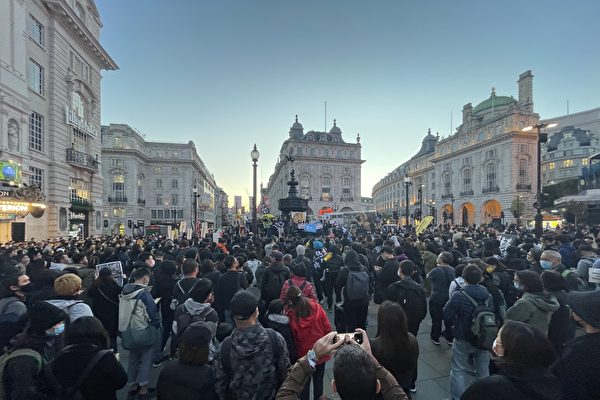 The Chinese communist regime celebrates Oct. 1 as its national day. However, protesters around the world mark the day as a “National Day of Mourning,” lamenting the loss of basic human rights and freedoms for mainland Chinese people for more than seven decades.

Nearly 100 Chinese people rallied in front of the Chinese Consulate in Los Angeles on Oct. 1 to protest the Chinese Communist Party’s (CCP) tyranny. They warned the public about its influence in the United States.

Protesters held anti-CCP signs and carried grass-stuffed figures of current and past Chinese communist leaders to the front of the consulate. Four of them carried a black coffin to the site, wishing an early end to the CCP. At the rally, they burned the CCP’s red five-star flag and acted out a short play, titled “The Siege of the Hong Kong Polytechnic University.” The play was to honor pro-democracy Hong Kong students who were victims of an armed police occupation of their campus in November 2019.

Fu Hanling, the deputy director of the Los Angeles branch of the Chinese Democratic Party, called on more Americans to awaken to the CCP’s oppression of its people. He also pointed out the CCP’s responsibility for the ongoing global pandemic due to its cover-up and delay in COVID-19 response.

“We must stand up to remind all nations and ethnic groups that those are all innocent lives claimed by the evil CCP,” said Fu. “The CCP should pay its price for the calamities.”

Another participant, Jie Lijian, flew a hydrogen balloon symbolizing the CCP virus, cautioning that the CCP was approaching and eroding everyone’s life exactly like the pandemic.

On the East Coast, in Boston, an argument broke out between CCP followers raising the five-star flag and protesters in front of city hall on Sept. 30. Yet, the rising CCP flag got stuck when the lifting device broke.

“I live right here, and this is my backyard,” he vented his anger via a loudspeaker. “I dislike the CCP’s flag being raised in my backyard. Especially more than 100 angry veterans live nearby, and we’re going to pull this flag down!”

“The CCP wants to subvert us through bribery and infiltration,” Berard continued. “But our government has not resisted.”

Chungchi Che, a representative of Friends of Hong Kong & Macau in Boston, said he comes to protest every year.

“The CCP is a mafia group, a criminal organization,” the senior citizen said. “The United States should reject it.”

A lady surnamed Lu also participated in the event. She complained to The Epoch Times that the Boston government allowed the CCP to raise its flag every year and that the ceremony triggered resentment and protests, including from Americans.

“That [flag-raising] doesn’t represent public opinion,” Lu told The Epoch Times. “That’s why we must come over to protest.”

In addition, protesters reminded those from mainland China who had come to celebrate Oct. 1 and the raising of the five-star flag, not to betray the United States, which had provided them with freedom and benefits on its soil. Instead, they said, they should be grateful to this country and oppose communist China.

Eight community groups gathered in front of the Chinese consulate in Toronto on Oct. 1, accusing the CCP of employing hostage diplomacy and meddling in Canadian affairs.

The organizations included the Toronto Association for Democracy in China, the Canada-Hong Kong Link, the Canadian Committee of the Democratic Party of China, and the Federation for a Democratic China (FDC).

“The 72-year despotic rule of the CCP has brought endless disasters and misfortunes to the Chinese people and beyond,” said author and FDC vice president Sheng Xue. “The Chinese communist regime is the worst in committing crimes against humanity in history.”

She chastised the CCP for imposing genocide policies on the Tibetan and Uyghur populations, persecuting Hongkongers, and killing Falun Gong practitioners for their organs.

Sheng stressed that although the two detained Canadians returned home from China, the CCP’s hostage diplomacy had set a dangerous precedent, which the CCP will reuse in the future.

Gloria Fung, president of Canada-Hong Kong Link, noted that behind China’s economic growth was a dark side of oppression and absolute social control by the CCP. In this context, political dissidents disappeared or were declared mentally ill.

Fung also warned of the CCP posing a major threat to Canada through its omnipresent spying, manipulation, and intimidation as well as hostage diplomacy.

“It’s time for Canada to show its leadership on the global stage, including responding strongly to China, banning Huawei, and boycotting the 2022 Winter Olympics in Beijing,” Fung stressed.

Human rights groups consisting of Hongkongers, Tibetans, and Uyghurs rallied in London on Oct. 1 and launched “Resist the CCP Day” to protest atrocities that the CCP had committed to ethnic populations.

Dr. Stephen Ng, who has lived in the United Kingdom for 30 years, is a co-founder of the Chinese for Labour and a winner of Member of the Order of the British Empire (MBE).

“What the CCP has done in Hong Kong defies logic and common sense,” he said.

He grieved at the reality in Hong Kong that young students were detained, campus groups were disbanded, media outlets were silenced, and pro-democracy groups and industry associations were forced to close.

“It’s crucially important for Hongkongers to preserve their lives, their power, and energy,” he added. “This authoritarian regime and its unjust control won’t last long.”

“On Oct. 1, 1949, then-CCP leader Mao Zedong claimed Tibet was liberated,” he said. “However, that ‘liberation’ turned out to be bloodbaths, claiming the lives of millions of Tibetans and Uyghurs.”

Yet, Passang was optimistic about the global anti-CCP situation.

“It’s incredibly encouraging that countless mainland Chinese join the movement of quitting the CCP and its affiliated organizations, and that more nations stand up against communist China’s global outreach,” he said.

Another participant surnamed Zhou, a Mandarin speaker, told The Epoch Times how he had changed from a pro-CCP stalwart to an anti-CCP activist.

“When I first came to Britain, I was supportive of the CCP due to my father’s influence,” Zhou said. “While in my secondary school, one of my classmates told me Mao Zedong, Stalin, and Hitler were all devils.”

“I was so furious that I protested, ‘You’re insulting our leaders.'”

While he was seeking evidence to defend himself, Zhou found alarming sources to challenge his previous viewpoints.

“It was through 10 years’ grappling in my mind that I began to believe, as President Ronald Reagan put it, that the CCP is a devil, an anti-God villain,” the protester said.

Two days ahead of Oct. 1, an online seminar was organized to focus on the CCP’s persecution of Hongkongers and demand an end to the CCP’s tyranny.

He said that within the framework of the national security law, few Hongkongers accused of “incitement” or “subversion” were granted bail. They were likely to face long-term detention, along with frozen assets and property before court hearings.

Ted Hui Chi-fung, a former Hong Kong legislator, who is currently in exile in Australia, said that with the national security law, the CCP had completely transformed the local social system, turning a free, open, and semi-democratic Hong Kong into an authoritarian society.

“Hongkongers will no longer trust the idea of ‘one country, two systems,'” he said. “Nor will they trust any other promises the CCP makes.”

Hong Kong authorities placed 8,000 police on the streets to curb any protests on Sept. 30 and Oct. 1, according to Bloomberg.

However, footage by the League of Social Democrats showed four of its members, including its chairperson Chan Po-ying, risked taking to the streets and protest on Oct. 1. They were stopped, searched, and questioned by police before they set off. Their activity was fully monitored. Along the way, the demonstrators shouted slogans like “Release all political prisoners,” and “Carry out universal suffrage for the whole country.”

Police intercepted them when they reached Central Plaza. There, the chairperson delivered a 7-minute statement before the group dispersed.