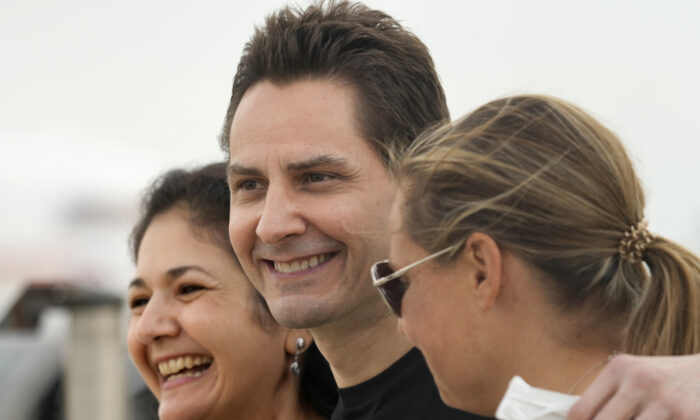 Michael Kovrig and Michael Spavor have arrived in Canada following their release from imprisonment in China.

Welcome home, Michael Kovrig and Michael Spavor. You’ve shown incredible strength, resilience, and perseverance. Know that Canadians across the country will continue to be here for you, just as they have been. pic.twitter.com/1UoLbBFGNv

Kovrig and Spavor were greeted by Prime Minister Justin Trudeau on the morning of Sept. 25 after landing in Calgary.

The two Canadians, who had been held captive in China since Dec. 10, 2018, were released once Huawei Chief Financial Officer Meng Wanzhou was allowed to leave Canada on Sept. 24.

The “two Michaels,” as they’ve come to be known, are widely viewed as being victims of Beijing’s “hostage diplomacy.”

Their detention in China came a few days after Meng was arrested in Vancouver, British Columbia, on Dec. 1, 2018, on a U.S. extradition request. Prior to their detention, Beijing had warned Canada of dire consequences if Meng wasn’t released.

During the early stages of their imprisonment in China, the two men were held in solitary confinement and underwent repeated interrogation, with the lights kept on in their cells day and night. That can lead to sleep deprivation, which is recognized as a torture method by human rights organizations.

Meng, who was facing charges of bank and wire fraud relating to violating U.S. sanctions on Iran, reached a deferred prosecution agreement with the U.S. Justice Department on Sept. 24. A Canadian court lifted her bail conditions on the same day, allowing her to leave Canada.

Chinese state media reported that she arrived in China on Sept. 25.

Kovrig, a former Canadian diplomat, is a scholar with the think tank Crisis Group, while Spavor is a businessman. China had charged the two men with espionage, which typically carries a heavy jail sentence.

As Meng’s court case was nearing its final stages in Canada, a Chinese court sentenced Spavor to 11 years in prison in August. Kovrig, who had his trial in March, was still awaiting sentencing.

Announcing the release of the two men on Sept. 24, Trudeau said they’ve “been through an unbelievably difficult situation.”

“For the past 1,000 days, they have shown strength, perseverance, resilience, and grace, and we are all inspired by that,” he said.

While Meng’s deferred prosecution agreement allowed her to plead not guilty to the charges, she had to agree to a “statement of facts.”

“In entering into the deferred prosecution agreement, Meng has taken responsibility for her principal role in perpetrating a scheme to defraud a global financial institution,” Acting U.S. Attorney Nicole Boeckmann said in a statement.

“Her admissions in the statement of facts confirm that, while acting as the Chief Financial Officer for Huawei, Meng made multiple material misrepresentations to a senior executive of a financial institution regarding Huawei’s business operations in Iran in an effort to preserve Huawei’s banking relationship with the financial institution.”