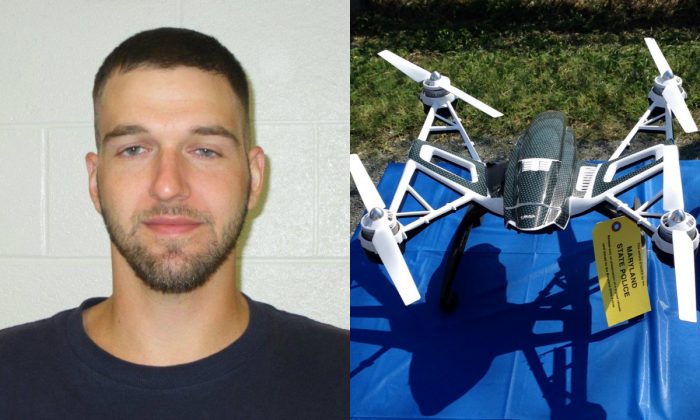 On the left, Thaddeus Shortz. Jury selection began Thursday, Jan. 14, 2016, in Cumberland, Md., for Shortz, accused of planning to use a drone to fly contraband into a maximum-security state prison. (Allegany County Sheriff's Office via AP) On the right, Yuneec Typhoon drone and controller Monday, Aug. 24, 2015, in Jessup, Md. Maryland State Police and prison officials say two men planned to use the drone to smuggle drugs, tobacco and pornography videos into the maximum-security Western Correctional Institution near Cumberland, Md. (AP Photo/David Dishneau)
Crime and Incidents

CUMBERLAND, Md.—A man arrested near a maximum-security state prison with an aerial drone and packages of illegal drugs, tobacco and pornographic videos in his pickup truck told police he was part of a ring that flew contraband into the prison, a prosecutor said as the conspiracy trial began Thursday.

However, a defense attorney contends Thaddeus Shortz, 25, of Knoxville, was doing nothing wrong when he and another man were arrested outside the Western Correctional Institution on the night of Aug. 22. Keith Russell of Silver Spring and prison inmate Charles Brooks are awaiting trial.

The case is the first involving allegations of drone smuggling at a Maryland state prison. Similar cases have surfaced in Georgia, Ohio, Oklahoma and South Carolina in recent years. The Maryland Department of Public Safety and Correctional Services is considering installing drone-detection technology at about 16 institutions at a cost of $8 million, spokesman Gerard Shields said.

Shortz’ jury trial on 35 counts is scheduled for two days in Allegany County Circuit Court. Assistant State’s Attorney Erich Bean said in his opening statement that Shortz, who had served time at the prison for a 2010 assault conviction, discussed the conspiracy with Brooks in recorded telephone conversations. They called the operation “a gold mine,” Bean said.

He said they had established a pattern of dropping contraband near the back door of a housing unit reserved for prisoners who trained service dogs under a program that’s been nationally lauded. Brooks was free to go in and out to walk the dogs, and would pick up the contraband, Bean said.

On the night Shortz was arrested, he initially told police he was just the driver, and that it was Russell who planned to fly the packages of prescription narcotics, synthetic marijuana, tobacco and DVDs over the prison fence. But under interrogation, Shortz boasted he was a leader of the ring, earning $4,000 for each of his previous drops. This one was to have paid him $6,000, because it included narcotics, Bean said.

Defense attorney Robin Ficker reserved his opening statement for later in the trial. He told The Associated Press on Tuesday that prosecutors had overcharged Shortz, an Army veteran who lost his right leg below the knee in a 2008 motorcycle accident.

“I think that if anything is flying anywhere in this case, it’s the state’s case flying over the cuckoo’s nest,” Ficker said.