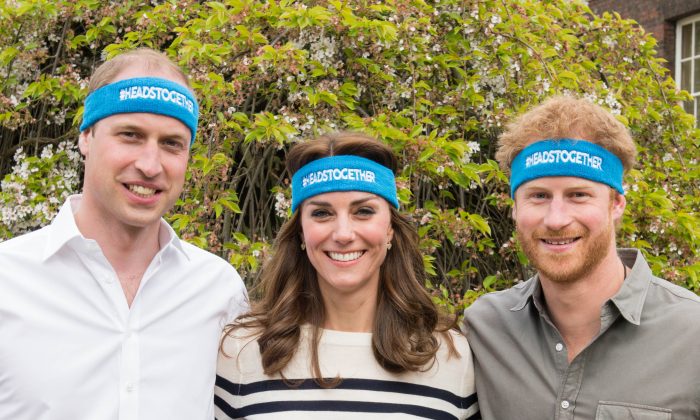 LONDON, ENGLAND - APRIL 21: The Duke and Duchess of Cambridge and Prince Harry are spearheading a new campaign called Heads Together in partnership with inspiring charities, which aims to change the national conversation on mental wellbeing. The campaign has the huge privilege of being the 2017 Virgin Money London Marathon Charity of the Year. At Kensington Palace on April 21, 2016 in London, England. (Photo by Nicky J Sims/Getty Images for Royal Foundation)
Royals

Young members of the British royal family have launched a campaign to raise awareness around mental health.

The Duke and Duchess of Cambridge and Prince Henry of Wales are spearheading the Heads Together campaign.

Harry, Kate, and William have found that “unresolved mental health problems lie at the heart of some of our greatest social challenges.”

“#HeadsTogether wants to help everyone feel much more comfortable with their everyday mental wellbeing”-The Duchess pic.twitter.com/Sf8Zipq6H1

Inspired by experiences during other charitable endeavors, the young royals partnered with eight mental health charities that have “decades of experience in tackling stigma, raising awareness, and providing vital help for people with mental health challenges.”

Working with these established charities, the Royal Foundation hopes to end the mental health stigma and to encourage individuals to get the help they need.

Cameron cited that nine out of ten people in the United Kingdom face discrimination as a result of their mental health issues.

Launched on May 16, Heads Together “wants to get people talking.”

“The more we talk about mental health, the more normal the topic becomes, and the more we feel able to open up and seek support,” said Prince William.

Heads Together is the 2017 Virgin Money London Marathon Charity of the Year, which gives it a large platform to solidify the campaign and change “the national conversation on mental health and wellbeing.”