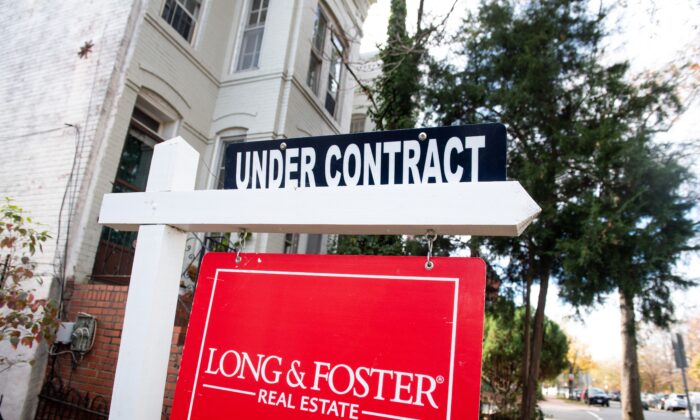 A house's real estate for sale sign shows the home as being "Under Contract" in Washington on Nov. 19, 2020. (Saul Loeb/AFP via Getty Images)
US Real Estate

Sales of previously owned homes in April tumbled for the third straight month to their slowest pace since the start of the pandemic, according to the National Association of Realtors on May 19.

Existing home sales fell to a seasonally adjusted annual rate of 5.61 million, while sales were down 2.4 percent from March and 5.9 percent from the year before in April 2021, which had a rate of 5.96 million.

This is the slowest rate since June 2020, after the economy was hit with widespread shutdowns due to the CCP virus.

“We are moving back to pre-pandemic sales activity, but I expect further declines,” said Lawrence Yun, NAR’s chief economist.

“It looks like more declines are imminent in the upcoming months, and we’ll likely return to the pre-pandemic home sales activity after the remarkable surge over the past two years.”

The April sales figures represent the closings for the month, with the contracts likely signed in February and March when mortgage rates were just starting to rise.

Mortgage rates are climbing after a sharp increase in 10-year Treasury yields, reflecting the Federal Reserve’s implementation of its aggressive policy to hike short-term interest rates in order to combat the worst inflation since the early 1980s.

The weekly average rate on a 30-year fixed-rate home loan in April climbed above 5 percent for the first time in more than a decade.

The average rate on the 30-year fixed mortgage last month hit a high of 5.45 percent, compared with February at 3.66 percent and March at 4.78 percent, according to Mortgage News Daily.

However, since its record high in April, the 30-year rate slipped to 5.25 percent this week from 5.3 percent last week, according to Freddie Mac.

The mortgage rate spikes hit homeowners’ purchasing power at the outset of the spring homebuying season, which is the busiest period for home sales in the United States.

The total inventory of unsold existing homes climbed to 1.03 million units at the end of April due to slower demand, a 10.8 percent increase from March.

This was a decline of 10.4 percent from April 2021 when the housing supply totaled 1.15 million units.

Unsold inventory currently sits at a 2.2-month supply at the current sales pace, up from 1.9 months in March and down from 2.3 months in April 2021.

The median sales price of previously owned homes increased at a slower year-over-year pace of 14.8 percent to $391,200, as sales continued to be robust on the higher end of the market, where the supply is stronger.

High-end home sales in the range of over $1 million increased by 16 percent compared with a year ago.

“Housing supply has started to improve, albeit at an extremely sluggish pace,” according to Yun, who noted that “the market is quite unusual as sales are coming down, but listed homes are still selling swiftly, and home prices are much higher than a year ago,” said Yun.

Sales are continuing to be swift with the average home sitting on the market closing just 17 days before going under contract.

The number of cash buyers in April remained high at 25 percent, with investors making up 17 percent of sales, while first-time buyers fell to just 28 percent, down from 30 percent in March, well below the historical average of making up about 40 percent of the buyers market.

The figures for newly built homes for sale for April will be released next week, but the Mortgage Bankers Association has already reported that mortgage applications for those homes dropped nearly 11 percent during the month compared with April 2021.

The MBA predicts that new home sales will fall for the fifth consecutive month to its slowest pace since May 2020.