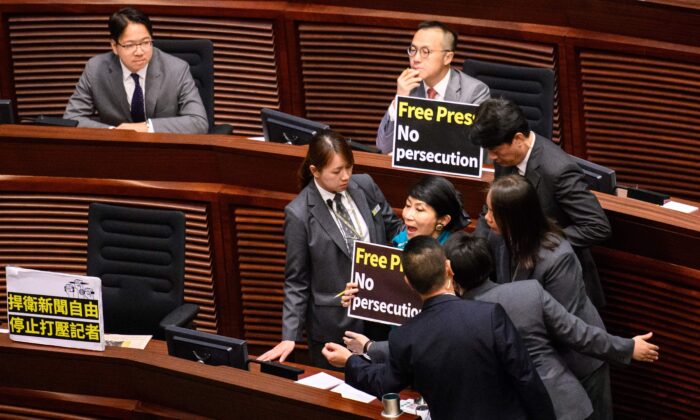 Hong Kong pro-democracy legislator Claudia Mo (R) is surrounded by security as she shouts "Free press! No Persecution!" as Chief Executive Carrie Lam (not pictured) arrives to deliver her policy address at the Legislative Council (Legco) in Hong Kong on Oct. 10, 2018. (Anthony Wallace/AFP via Getty Images)
By Nicole Hao

The Chinese regime has undermined press freedom in Hong Kong and Taiwan as it seeks to export censorship worldwide, according to a recent report by U.S.-based nonprofit.

While the special administrative region of Hong Kong and the self-ruled island of Taiwan have been “bastions of civil liberties in East Asia,” their media markets have come under pressure from the communist regime as it seeks to influence editorial content and manipulate public opinion, said a Dec. 16, 2019, report by the Committee to Protect Journalists (CPJ).

“Hong Kong and Taiwan are on the frontlines of this battle [of press freedom],” it stated.

The report came as Hong Kong is embroiled in more than half a year of protests against the regime’s growing interference in the city. Meanwhile, the regime’s infiltration in various sectors of Taiwanese society, including media, has drawn heightened scrutiny as the island heads towards its presidential election in early January.

According to the CPJ, the regime has deployed a range of measures to influence media including openly or covertly taking ownership of media outlets, pressuring media owners through financial incentives, and intimidating journalists.

Since Hong Kong reverted from British to Chinese rule in 1997, the city’s freedoms, including free press, have come under severe pressure, the report said.

Nine out of 26 mainstream media outlets in the city are controlled by Chinese regime authorities or companies led by Chinese Communist Party (CCP) members, the report stated, citing a tally by the Hong Kong Journalists Association. These include leading TV broadcaster TVB, and English-language newspaper South China Morning Post.

On top of this, Chinese businessmen who aren’t residents of mainland China but have political appointments within the regime control additional outlets, meaning more than half of the city’s news organizations have close ties to the mainland, the report added.

Meanwhile, outlets that have not caved to regime pressure have found themselves the targeted by the regime. For example, Jimmy Lai, chair of Next Digital, the company that owns independent Chinese-language media Apple Daily, found himself the subject of attacks from Chinese state-run propaganda outlets after he met with U.S. Vice President Mike Pence in July 2019.

An August 2019 commentary by Chinese state-run Xinhua had accused Lai of spreading disinformation and working with foreign forces to interfere in Hong Kong.

In March 2019, former Hong Kong chief executive Leung Chun-ying, now vice-chair of the National Committee of the Chinese People’s Political Consultative Conference, an advisory body to the Party, launched a social media campaign aimed at getting people to boycott advertisers with Apple Daily.

“The squeeze on Apple Daily advertising is consistent with China’s increasing efforts to wield commercial muscle against companies that cross an ill-defined political red line,” the report stated.

Pro-democracy media outlets and journalists have also suffered from a variety of attacks, the report noted. Lai’s home was firebombed in 2015, and again in September 2019. His company headquarters was also firebombed during the attack in 2015.

In February 2014, two assailants attacked Hong Kong journalist Kevin Lau, slashing his back six times with a cleaver. Lau was editor-in-chief of pro-democracy leaning Ming Pao, but was replaced in January 2014. The assailants were arrested and are currently serving 19-year jail sentences over the incident.

In November 2019, the printing warehouse of the Hong Kong edition of the Epoch Times came under an arson attack when four masked intruders set fire to some of the equipment while employees were on shift.

“CPJ research overwhelmingly shows that when journalists or a publisher such as Lai are targeted for attack, they’ve been known for critical reporting on Hong Kong or China,” the report said.

“Police do make the occasional arrest and conviction, as in the Kevin Lau attack, but rarely convict those who are ultimately responsible.”

Journalists in Hong Kong are also concerned that critical reporting of the regime would lead to Beijing denying them visas to work in the mainland, while international correspondents fear that their permission to stay in Hong Kong could be revoked.

“That prohibition has nonetheless failed to halt China’s efforts to influence media or prevent individuals with strong business interests in China, who are potentially vulnerable to Chinese pressure, from owning Taiwanese media,” the report stated.

Taiwan also bans advertising by the regime, but not Chinese commercial entities.

“A cursory look at Taiwan’s newspapers indicates that papers that are critical of China do not carry advertisements from China. It pays to be pro-Beijing,” it stated.

In March 2012, The China Times ran daily reports on a visit to Taiwan by Chinese official Su Shulin, then-governor of the Southern Chinese province of Fujian. An independent news site New Talk later revealed that Fujian authorities had paid The China Times for the coverage to promote tourism.

The paper was fined NT$1.8 million (US$57,368) for illegally running advertising for Chinese authorities.

In April 2019, Nikkei Asian Review reported that Want Want had received $586.7 million in Chinese state subsidies since 2004. The company responded, saying the subsidies received had no connection to its media business.

In May 2019, the deputy director-general of the National Security Bureau, Taiwan’s intelligence agency, Vincent Chen Wen-fan told a legislative hearing that some Taiwan media outlets cooperated with the Chinese regime to spread fake news and disinformation.

Want Want Group and Chinese state-run media Beijing Daily co-hosted a forum in Beijing in May 2019, which was attended by 85 Taiwanese media executives and commentator. During the conference, Wang Yang, a member of the CCP Politburo Standing Committee, the regime’s top decision-making body, asked journalists to promote the “one country, two systems” formula that has been applied in Hong Kong.

The regime has repeatedly suggested that Taiwan can be “reunited” with the mainland under such a framework, such that the island could maintain its political system and freedoms not enjoyed in China.