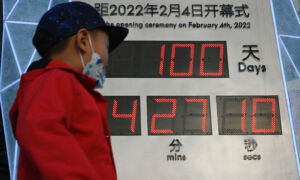 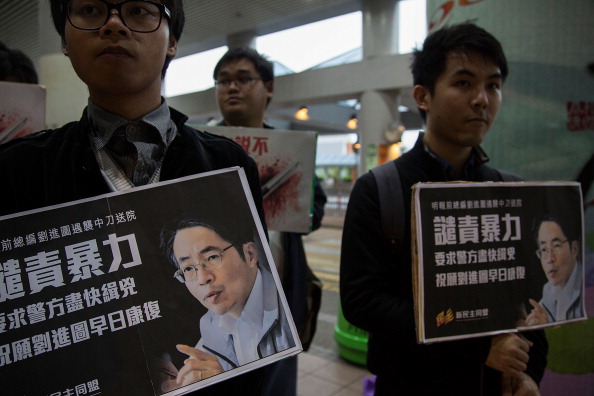 Pro-democracy activists hold a banner with an image of Kevin Lau Chun-to, former chief editor of the Ming Pao newspaper, as they attend a candlelight vigil. Lau was stabbed and seriously injured by two attackers on Feb. 26. (Lam Yik Fei/Getty Images)
China

The former editor of a major newspaper in Hong Kong was stabbed and slashed in the back and legs by two men on Feb. 26, police said. The attack saw Kevin Lau Chun-to, until recently chief editor of the Ming Pao newspaper, rushed to the hospital in a critical condition.

Lau Chun-to’s dismissal as editor of Ming Pao, published in Hong Kong, made headlines in the city and around the world last month. The stabbing is thought to be somehow related to it, and follows a string of violence against media figures in Hong Kong over the last few years.

The attackers struck at 10 a.m. on Wednesday, just after Lau got out of his car in Sai Wan Ho, a residential area, in Hong Kong.

The attacker fled with a partner on a motorcycle, according to Simon Kwan King-pan, the chief inspector of the Hong Kong police.

Lau had six slashes: two on the back, and two on each leg, according to C.N. Tang, a doctor at Pamela Youde Nethersole Eastern Hospital. The largest wound, on Lau’s back, was measured at is 6.3 inches.

After emergency surgery Lau is no longer in danger of losing his life, but is still in a delicate condition, the doctor indicated.

Lau, 49, was abruptly dismissed from his post at Ming Pao in early January. Little explanation was proffered by his employer, who has ties with mainland China, and journalists and other civic figures questioned whether there was a political conspiracy behind the sacking.

Many in Hong Kong believe that the Chinese Communist Party is working hard to influence and control the press in the city, which is part of the People’s Republic of China but is supposed to be governed independently of the PRC. Thousands joined street protests in Hong Kong over the last month.

The attack on Lau angered many, and also gave to deep concerns about free speech in Hong Kong. “We are worried that the incident will pose a threat to the freedom of press and speech in Hong Kong,” the Hong Kong Journalists Association said in an announcement over the slashing.

Ming Pao published an announcement later on Wednesday offering a one million Hong Kong dollar ($129,000) reward for information about the attackers. The paper strongly condemned the “cold-blooded violence in broad daylight.”

Lau’s case is one of many similar anonymous assaults against media figures in Hong Kong in recent years. Last June anti-communist media mogul Jimmy Lai, head of Hong Kong’s rambunctious Apple Daily, had his front gate rammed with a stolen car, while an axe and a machete were left on the driveway. No one was injured, but police said the attack appeared to be sending a warning.