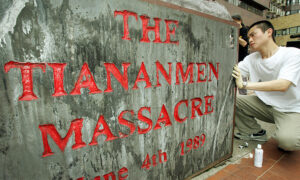 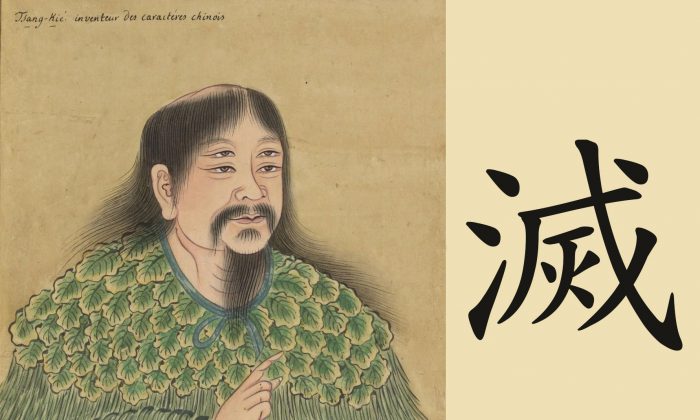 The Chinese character 滅 (mie) means eliminate, extinguish, or destroy. Within this character, the ancient Chinese philosophy of the elements of the universe are at play.

The character 滅 is formed with three parts: 火 fire, 戌 a weapon, and the radical on the left-hand side 氵 that represents water.

戌 is a full character by itself, meaning a kind of long handle weapon, but it is also used in the traditional Chinese calendar, representing the eleventh of the twelve Earthly Branches, corresponding to the element earth.

In “Shuowen Jiezi”, the early 2nd-century Chinese dictionary from the Han Dynasty, fire is described as the strongest Yang Qi (in Chinese culture it is believed that Qi is a form of energy), yet it will loose its power when it reaches 戌 (xu).

In the interaction between the radical 氵 and the characters 火 and 戌, water extinguishes fire, fire gives (re-)birth to earth, while earth can engulf fire.

In Bone Oracle Script, the earliest ancient Chinese writing, 戌 was written as shown below:

Doesn’t it look like a fire axe used by fire fighters today? So the whole character 滅 is like a well-equipped fire engine.

In the simplified character “灭” used in Mainland China, the water and the fire axe have gone, there is only a horizontal stroke on the top of fire. Let’s hope that the fire-fighting facilities at fire stations on the Mainland have not also been simplified!

However, when water becomes ice, 冰, instead of three drops,氵 , the left-hand side radical has been reduced to two drops, 冫, as water is less able to flow.

It is said that Cangjie, the person who created Chinese writing 5,000 years ago, was born with four eyes. This led to his deeper observation of the natural world, its creatures, and processes, and to his discerning the truth by piercing through to the depths of even the greatest mysteries.

The Chinese Character for Love, With and Without a Heart