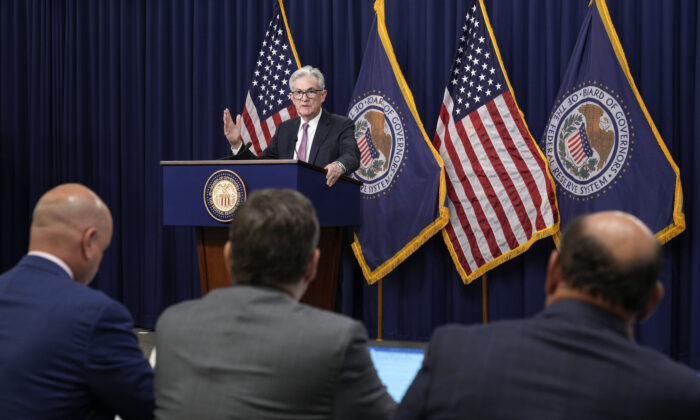 U.S. Federal Reserve chair Jerome Powell spoke bluntly at a highly anticipated annual conference to dispel the assumption that because elevated inflation may have peaked, the Fed could soon pivot from continuing to aggressively hike interest rates. Canada is in the same boat as the United States, and Powell’s words served as a reminder that the fight against inflation is far from over and some economic pain is in store.

Central bankers, finance officials, and academics from around the world gathered in Jackson Hole, Wyoming, from Aug. 25 to 27 for the yearly economic policy symposium where Powell got right to the point in a concise speech on Aug. 26.

“A single month’s improvement falls far short of what the committee will need to see before we are confident that inflation is moving down. So we are moving our policy stance purposefully to a level that will be sufficiently restrictive to return inflation to 2 percent,” he said.

Steve Ambler, economics professor at the Université du Québec à Montréal, told The Epoch Times, “The problem is that if the Fed gets really tough and keeps raising, then the Bank of Canada has to—it doesn’t have to follow in lockstep—but I think it has to follow fairly closely.

“Otherwise, the risk would be a depreciating Canadian dollar which could worsen the inflation situation in Canada.”

This year, both the U.S. Fed and BoC have raised rates by 225 basis points (2.25 percentage points) between March and July.

“The speech frankly tilled little new ground, acting more as a cudgel against those looking for a fast Fed pivot, a blink, or rate cuts in 2023,” said BMO chief economist Doug Porter in an Aug. 26 note.

Powell warned that some job losses and slower economic growth would result from higher rates.

“They will also bring some pain to households and businesses. These are the unfortunate costs of reducing inflation.” he said.

Bank of Canada governor Tiff Macklem attended the Jackson Hole symposium but did not make any presentations or speak to the media.

He stated in an Aug. 16 National Post editorial that the BoC needs to slow down spending so supply has time to catch up to demand.

“Even if inflation came down a little in July, prices for more than half of the goods and services that make up the CPI [consumer price index] basket are rising faster than 5 percent.”

The reactions in financial markets to Powell’s words were telling as they began to price in higher interest rates for longer.

The S&P 500 suffered its worst daily performance in over two months on Aug. 26, with a 3.4 percent decline, and the two-year U.S. treasury bond recorded its highest yield since 2007 at 3.48 percent on Aug. 29, according to Deutsche Bank.

Canada’s Toronto Stock Exchange is down 3.3 percent as of Aug. 30 from its close on Aug. 25 prior to the Powell speech.

“Inflation as a Fiscal Limit,” a study presented in Jackson Hole on Aug. 27 by Francesco Bianchi of Johns Hopkins University and Leonardo Melosi of the Federal Reserve Bank of Chicago, argued that the central bank’s ability to fight inflation is not decisive unless the government is doing its part to ensure that the national debt remains stable or declines.

“The conquest of post-pandemic inflation requires mutually consistent monetary and fiscal policies,” the authors of the study stated.

“When the fiscal authority is not perceived as fully responsible for covering the existing fiscal imbalances, the private sector expects that inflation will rise to ensure sustainability of national debt,” wrote Bianchi and Melosi.

Fiscal sustainability means that the debt, as a share of the economy or gross domestic product (GDP), is not continuously growing.

During the recovery from the pandemic, inflation has soared well past the Bank of Canada’s upper limit of 3 percent for its inflation target range, and currently sits at 7.6 percent.

While government spending is coming down due to pandemic support programs running off, the national debt did top $1 trillion and the feds have still not put forth any plans to eliminate deficits.

Ambler explains: “The relationship to credibility is that if the public does not believe that fiscal authorities can keep their promises to keep spending under control, then there’s going to be some sort of default premium built into the interest rates at which they [the government] can borrow.”

If and when this occurs, Ambler says, it would have a “deleterious effect on growth,” as higher interest rates would discourage investment by firms, which would also be trying to raise their prices.

The warning in the study is that if the central bank’s interest rate increases to curtail inflation are not accompanied by expectations of lower government spending, the deteriorating fiscal position leads to even higher inflationary pressure—a “pathological” situation.

The Bank of Canada is widely expected to raise rates again in September, while the federal budget laid out a plan of net new spending of roughly $60 billion in April.

However, Canada’s Parliamentary Budget Officer (PBO) said in its 2022 fiscal sustainability report in July that the current fiscal policy at the federal level is sustainable, but beyond that it is only sustainable in four provinces—Quebec, Alberta, Saskatchewan, and Nova Scotia.

But what is also making the debt sustainability ratio look better is elevated inflation, which raises GDP and government revenues.

“If we go through a year-and-a-half, two years of high inflation, that reduces the real value of the debt quite a bit,” Ambler said.

Bianchi and Melosi provide the historical example of how the United States got runaway inflation under control in the mid-1980s when the Reagan administration “provided the much needed political backing to the Federal Reserve Chairman Paul Volcker’s anti-inflation policies.”