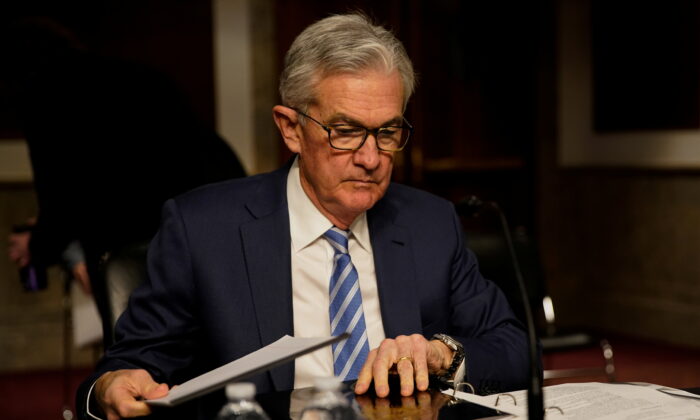 Federal Reserve Chair Jerome Powell prepares to testify before a Senate Banking Committee hybrid hearing on oversight of the Treasury Department and the Federal Reserve on Capitol Hill in Wash., on Nov. 30, 2021. (Elizabeth Frantz/Reuters)
Economy

The U.S. central bank should consider accelerating the winding down of its large-scale bond purchases at its next policy meeting in two weeks amid a strong economy and expectations that a surge in inflation will persist into the middle of next year, Federal Reserve Chair Jerome Powell said on Tuesday.

Powell twinned his remarks, described by some analysts as “surprisingly hawkish,” with a characterization of the economic risk from an emergent variant of COVID-19 that has unnerved officials and financial markets worldwide in recent days as not comparable to the spring of 2020 when the pandemic erupted.

Indeed, the Fed chief told members of the Senate Banking Committee that the U.S. economy continues to strengthen, job growth remains robust and high inflation – now running at more than twice the Fed’s flexible target of 2 percent annually-is expected to last longer than he and other officials had expected.

He also acknowledged that his preferred term for describing inflation as a likely passing phenomenon-“transitory”-should probably be “retired,” suggesting policymakers would make a more concerted effort to rein in price increases in the months ahead.

“At this point the economy is very strong and inflationary pressures are high and it is therefore appropriate, in my view, to consider wrapping up the taper of our asset purchases, which we actually announced at the November meeting, perhaps a few months sooner, and I expect that we will discuss that at our upcoming meeting in a couple of weeks,” Powell, who testified alongside Treasury Secretary Janet Yellen, told the Senate panel.

The Fed began to reduce its support for the economy this month, and is currently on track to fully taper its $120 billion in monthly purchases of Treasuries and mortgage-backed securities by next June. The program was introduced in early 2020 to help nurse the economy through the COVID-19 pandemic.

A number of Fed officials had previously advocated that the central bank accelerate that pace to finish it sometime in the spring to allow for an earlier start of interest rate increases should they be needed to rein in inflation. Minutes of their latest meeting suggested a full debate over that timeline was in the cards for their next meeting scheduled for Dec. 14-15.

Powell’s testimony appeared to suggest he is ready to join those colleagues in favoring a quicker wind-down of asset purchases, and were made as financial markets continued to be roiled by the emergence of the new Omicron variant of the coronavirus that is more easily transmissible and may evade vaccinations.

That news prompted markets connected to Fed policy expectations to push back the perceived timeline for the start of rate hikes. But Powell’s comments about a potentially faster taper pace and inflation persisting “well into” 2022 reversed some of that momentum and drove bond yields higher.

“Powell came off as much more hawkish than many were assuming given the variant risk,” said Ben Jeffery, interest rate strategist at BMO Capital Markets in New York. “He said now is the time to kind of abandon the transitory characterization of inflation and said that maybe a conversation about tapering earlier than previously assumed might be appropriate.”

Futures tied to the expected outcome of the Fed policy meetings signaled investors and traders expect the central bank to progress from the end of the bond-buying taper to its first interest rate hike as early as its June 2022 meeting. CME Group’s FedWatch program assigned greater than a 70 percent probability of a rate hike at that meeting, up from roughly 50 percent on the day.

Health officials are racing to determine how transmissible and deadly the new Omicron variant is and to what extent current vaccines remain protective. The United States has imposed a travel ban on some southern African nations where the strain is prevalent.

The now-dominant Delta variant of COVID-19 dented the U.S. economy over the summer, slowing employment gains amid workers’ fears of contracting the virus and exacerbating supply chain snags that have driven up inflation.

“It’s really about transmissibility, it’s about the ability of the vaccines to address any new variant, it’s about the severity of the disease once it’s contracted … I am told by experts we’ll know quite a bit about those answers within about a month,” Powell testified. “We’ll know something, though, within a week to 10 days.”

“Then and only then can we make an assessment of what the impact would be on the economy … For now it’s a risk to the baseline, it’s not really baked into our forecast.”

Nonetheless, Powell acknowledged that Omicron is elevating the uncertainty around the outlook for the economy-and potentially adding to inflation risks-though he said he does not think its effects will be “remotely comparable” to March 2020 when the pandemic cast the economy into a short but historically deep recession.