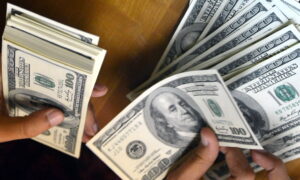 The Portland Police Department said it stood by as Antifa, Black Lives Matter, and other groups blocked traffic, harassed drivers, and assaulted a man who had exited his car after the mob damaged the vehicle.

The shocking sequence of events, caught on camera by a videojournalist, was at least partly witnessed by police officers, who stood by and did nothing despite the groups not having a permit for a demonstration.

Some 100 activists had gathered to protest the shooting of Patrick Kimmons, a convicted criminal who was suspected of shooting two people before police officers responded and ended up shooting him, on Oct. 6 in downtown Portland.

WATCH: A driver plowed through protesters in downtown Portland this afternoon. Police say they have not heard from either the driver or victim yet. https://t.co/OBeORYW7Rf pic.twitter.com/18wQ8hb0nH

The driver, identified as 74-year-old Kent Houser, was slowly driving down the street trying to get through the groups, who did not have a permit but were walking in the middle of the road.

Suddenly, a group of them surrounded the car and started beating on it. One got in front of it and started pushing, trying to stop the vehicle from moving. Protesters said Houser initiated the contact by trying to drive through them.

Teressa Raiford, one of the organizers of the march, told the broadcaster that the driver was in the wrong. “Well, we were just motioning to the driver that, ‘Hey, there’s a protest and you can’t move forward because there’s no way’—like, you know, unless you’re trying to hit these people—there’s no, no way to stop the protest from coming toward you,” she said.

Houser got past the group and sped up before slamming on his brakes and exiting the vehicle.

That’s when some members of the group sprinted down the street and surrounded the man. One member pushed the man while others started hitting the car again, forcing the driver back into his vehicle. He drove away.

“I’ve lived here my whole life but I don’t want to go downtown anymore,” Houser told the Wall Street Journal. “When the streets are commandeered by a sponsored group of angry, agitated ingrates and criminals, we have no city.”

Houser told KATU that the mob inflicted $3,000 in damages to his vehicle.

Police Admit They Stood By

The incident came after footage showed protesters forcing drivers to turn right as a group of them blocked traffic at an intersection. When one man driving a car with North Carolina plates stopped at the intersection, several of the group approached him and one started yelling: “You are a little white supremacist. Go back to North Carolina where you came from.”

The driver called the police and asked for assistance but nobody came.

Despite the illegal blocking of traffic and the assault, police said they didn’t want to intervene. The department told the Journal in a statement that it feared intervention would “change the demeanor of the crowd for the worse.”

Portland Police Bureau spokesman Sgt. Chris Burley added to KATU that what happened was a good example of why demonstrators should have permits, so officers can keep them and drivers separated.

“Recognize that it can be dangerous not only for marchers in a group, but also for drivers as well,” he said, adding that an investigation has been opened into the incident with Houser based on Houser’s 911 call.