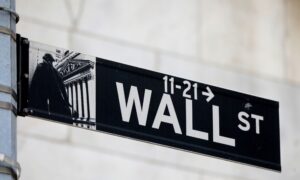 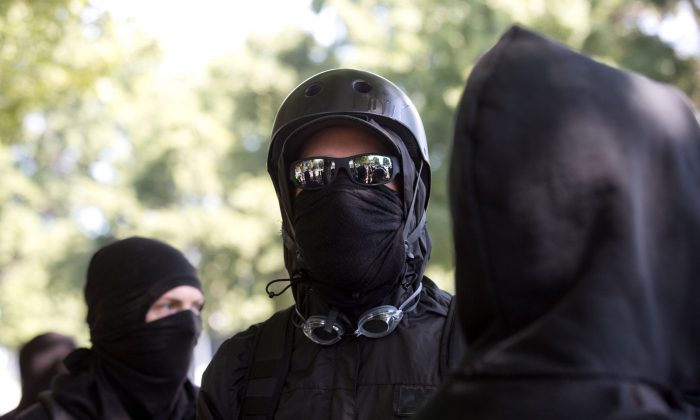 Far-left Antifa protesters wear bandanas over their faces during a protest in downtown Portland, Ore., on Sept. 10, 2017. (NATALIE BEHRING/AFP/Getty Images)
Crime and Incidents

Hundreds of people protesting the death of Patrick K. Kimmons, who was shot by Portland police, were causing traffic and noise disturbance in downtown Portland on Oct. 6, Oregon Live reported.

In the chaos that resulted from protesters taking charge of the roads and directing traffic while police stood on standby, numerous altercations erupted between protesters and locals, local media reported.

One such altercation between a driver and protesters was captured by local videographer Brandon Farley, who shoots and edits videos of disruptive events in Portland. Farley captured the moment a driver struck a protester as he attempted to push his way through the crowd to continue his journey.

The video shows the driver of the silver Lexus trying to make a right-hand turn at a green light amongst a crowd of protesters. One protester was pushed by the car as it made the turn. Protesters were also hitting the car. Fortunately, no one was injured.

Portland's Day of Mourning and Protest pt. 3
–
Leaders at the frontline move ahead to block off traffic for the protest. A Mob of Protesters bombard an Old Man with Weapons and cause destruction to his vehicle. 🚗🏃🏻‍♂️🏃🏻‍♀️🚶🏻‍♂️
–#PatrickKimmons #Antifa #BLM #pdxtraffic #Downtown pic.twitter.com/fNw3hW6yqO

Protesters then chased the car down as the driver stopped to check for damage.

KOIN 6 news reported that police didn’t intervene even through protesters were affecting traffic.

Portland Police Bureau spokesman Sgt. Chris Burley said that the police were taking into account the protesters’ First Amendment rights of free speech and free assembly, as well as the impact the protests had on the Portland community.

My interview on @TuckerCarlson: We discuss why demonstrators were allowed to threaten drivers with impunity on an illegally occupied street in downtown Portland, Ore. Still no comment from the Mayor. https://t.co/NGea5rcTam pic.twitter.com/P6zYCxiXk2

The driver later reported to the police that a total of $3,000 of damage was made to his car, KATU reported.

Police said that they received a 911 call from the driver after the confrontation and have opened an investigation into the incident.

Updates via KOIN news: The elderly man called police & filed a report after the incident. The person who made contact with the front of the car has not. And police basically said they didn’t get involved to protect first amendment rights. https://t.co/C4HoXjVK6e

Police said that the protesters did not have a permit for the protest, KATU reported, adding that the incidents on the day demonstrated how important permits are to ensure that police are prepared to maintain a safe separation between protesters and road users.

“It can be dangerous not only for marchers in a group, but also for drivers as well,” said Burley, KATU reported.