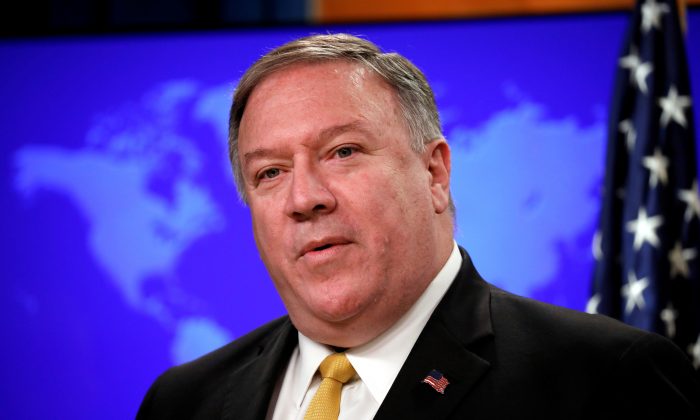 Pompeo Calls China’s Treatment of Uyghurs ‘Stain of the Century’

WASHINGTON—U.S. Secretary of State Mike Pompeo on July 18 called China‘s treatment of its Uyghur Muslim minority the “stain of the century” and accused Beijing of pressuring countries not to attend a U.S.-hosted conference on religious freedom.

“China is home to one of the worst human rights crises of our time; it is truly the stain of the century,” Pompeo told the final day of the international conference in Washington.

Pompeo said Chinese government officials had sought to discourage countries from attending the three-day event he has hosted.

“Is that consistent with the guarantee of religious belief that is found directly in the Chinese constitution?” he asked.

Pompeo, who said this week that more than 100 foreign delegations had been invited to the conference, congratulated countries which had defied Chinese pressure, while adding: “If you have declined to attend for the same region, we take note.”

Pompeo did not name any of the countries and a State Department spokesman could not provide a figure.

“We know the Chinese government called countries specifically to discourage participation. We cannot prove the exact number they successfully impacted,” he said.

Pompeo’s remarks came a day after President Donald Trump met at the White House with victims of religious persecution from countries including China, Turkey, North Korea, Iran and Burma.

Vice President Mike Pence, who has been a strong critic of China, was also due to address the Washington conference on Thursday morning.

Nearly two dozen nations at the U.N. Human Rights Council this month urged China to halt persecution of ethnic Uyghurs in its western region of Xinjiang, where U.N. experts and activists say at least 1 million are held in detention centers.

The Trump administration has been weighing sanctions under the Global Magnitsky Act against Chinese officials over their policies in Xinjiang, including the Communist Party chief of the region, Chen Quanguo.

U.S. lawmakers renewed calls for the administration to sanction officials overseeing human rights abuses against Uyghurs and other Muslim minorities in Xinjiang.

Representative Jim McGovern (D-MA) and Senator Marco Rubio (R-FL) on July 5 issued a statement urging the U.S. government to “urgently address what is one of the world’s worst human rights situations.”