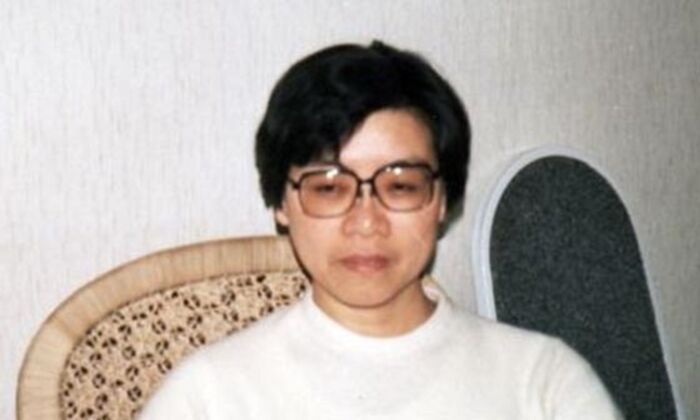 A file from a leaked Chinese police database shows that the regime arrested and sentenced a 61-year-old woman to prison simply because she sent a text message that was against the regime’s propaganda.

Bai Gendi died on June 15, 2017, at 65, four years and nine months after the leaked document revealed the content of a text message she had sent.

In the last period of her life, Bai told her family several times that she was tortured and poisoned while in prison because she refused to denounce her faith or confess to any crime. “They [prison guards] want me to die,” is the last sentence that Bai said clearly to her loved ones before she passed away. She said that the regime didn’t want her to tell people the facts about Falun Dafa.

Falun Dafa, also known as Falun Gong, is a spiritual practice with moral teachings and five exercises. Adherents follow the principles of truthfulness, compassion, and tolerance. In 1999, the Chinese regime launched a persecution that has continued for over two decades.

A trove of data on one billion Chinese residents, allegedly hacked from the Shanghai police database, was listed for sale on the dark web in late June. The seller, under the name “ChinaDan,” posted a sample that contained 750,000 records to attract buyers.

Although the authenticity of nearly 24 terabytes (24 TB) of data wasn’t verified, and no government commented on it, over a dozen people whose identities were listed in the sample have confirmed the accuracy.

The record indicated that the police identified the phone number as belonging to Bai Gendi. Hours later, they arrested Bai at Chenjiazhai Tunnel on Longwu Road in the Xuhui District of Shanghai.

“No law in China rules that people can’t practice Falun Dafa. On the contrary, the laws protect people’s freedom of belief, speech, and monitoring of the regime,” former Chinese judge Wang Chongming who used to work at a Beijing city court told the Chinese-language Epoch Times on July 15. “It’s legal for Chinese people to practice Falun Dafa. According to the law, Chinese people have the right to promote their beliefs and reveal the persecution that they suffered because of belief.”

“Bai was arrested on Sept. 10, 2012, and sentenced to prison on May 3, 2013,” reported Minghui.org, a U.S.-based website that documents the CCP’s campaign against Falun Dafa. “Bai Gendi’s family suspected that her death was a direct result of her being drugged and tortured in prison.”

Before the leaked database revealed her text message, Bai and the people around her didn’t know why the police had arrested her on a public road. They simply thought she was arrested and sentenced to a fabricated crime  by the Xuhui District Court because she refused to renounce her belief in Falun Dafa.

“Bai was detained in a small iron cage after she was transferred to [Shanghai Women’s] Prison in mid-2013, where she couldn’t stand or lie down,” Minghui.org quoted Bai’s fellow prisoner. “The prison guards only allowed her to wear short sleeves and short pants when we wore down coats in winter because she didn’t give up.”

In the spring of 2013, Bai was moved to a regular prison cell. But the prison guards didn’t reduce the intensity of their torture.

On Aug. 24, 2016, the prison informed Bai’s family that Bai fell from a chair and lost consciousness. When the family arrived at Songjiang Renmin Hospital, they saw Bai’s skull was wounded and the gash was bleeding. She was extemely underweight and drifted in and out of consciousness.

The family noticed the cut on Bai’s head appeared more like a surgical incision than a wound from an accident. The prison guards couldn’t explain the gash and refused to show the surveillance video. Soon after, a doctor announced that  there was a tumor in Bai’s lungs.

After she was released on medical parole in early September 2016, Bai told her family everything that happened. The day before she was sent to the hospital, the guards moved all her cellmates to another location. She ate breakfast alone on the next morning. Soon, she felt dizzy and passed out. By the time she came to that evening, she was in the hospital.

Bai said that the prison had added an unknown drug to the food that she was given in early 2016. She threw up when she ate the food. Realizing that the food might contain some kind of poison, she refused to eat anything prepared just for her, and only ate the same food as her cellmates.

Bai also said that the prison guards used a wooden stick to frequently beat her head.

It looked to Bai’s family that Bai was recovering; but on Sept. 30, 2016, she had a severe headache. She continued to have headaches and found it hard to communicate.

Bai passed away on June 15, 2017. Her family said that the Shanghai state police officers were hanging around her house and the hospital when she was on medical parole.

Bai was a manager at an office of state-run China National Offshore Oil Corporation Donghai Company & Caltex. “She is optimistic, enthusiastic, kind, sincere, understanding, caring, and considerate. She is a good person for all the others,” Wang Youqun, a columnist and China affairs commentator, wrote in his opinion piece about the CCP’s persecution of Falun Dafa practitioners in Shanghai on April 26.

Bai enjoyed a happy life after she practised Falun Dafa. However, the regime suddenly didn’t allow people to continue to follow their beliefs on July 20, 1999.

To force Bai to renounce her beliefs, the regime jailed her in the Shanghai Qingsong labor camp and the Shanghai Songjiang Women’s Prison for nearly 14 years of her life.