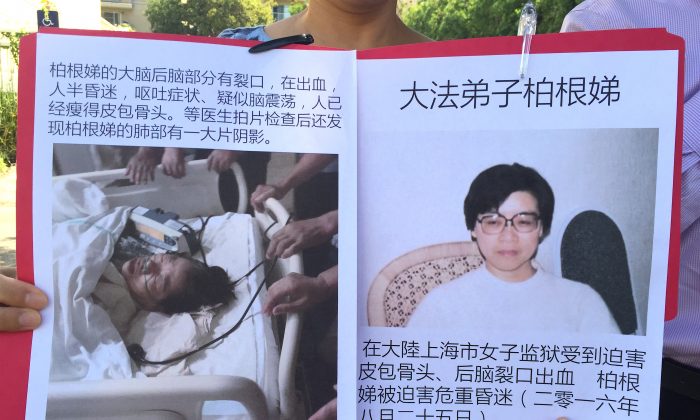 Chinese Prisoner of Conscience Near Death Due to Torture

LOS ANGELES—Bai Gendi, a 65-year-old woman, has been arrested six times and detained in Shanghai, China, for nearly 14 years of her life since the year 1999. Now she has been tortured to the brink of death, say supporters.

On Friday, Sept. 2, a group of Falun Gong practitioners in Los Angeles gathered at the Chinese consulate to call for Bai’s immediate release.

Bai also practices the spiritual meditation Falun Gong, or Falun Dafa, which has been under violent persecution in China since 1999.

“Her life is in danger because of the persecution,” said Helen Lee, who hosted the rally.

Practitioners said Bai had been serving a six and a half year prison sentence when she was sent to the hospital on Aug. 24.

Family members then visited Bai and found her bleeding from a crack in her skull, vomiting, and slipping in and out of consciousness. She was also extremely thin.

According to officials, Bai had fallen from a chair by herself and hit her head. But her family questioned how this possibly could have happened in the small solitary prison cell she had been held in for the last four years.

Bai’s family said that since she was last arrested on Sept. 10, 2012, she had not been allowed to take a shower, brush her teeth, or wash her clothes and experienced a wide variety of torture methods, including being drenched with cold water in sub-zero temperatures.

Wu Bing Qing, a Falun Gong practitioner in Los Angeles, is also from Shanghai and knows Bai. She herself spent two years in a labor camp, had to work over 20 hours per day, and had to listen to radio programs disparaging her beliefs every day, before she was able to come to the United States.

“Such a healthy and kind person was persecuted and tortured to the brink of death,” she said of Bai. “To hide the truth and to persecute, they are willing to use all kinds of methods.”

Two Los Angeles Falun Gong practitioners attempted to deliver a letter to the Chinese consulate on Friday calling for her release and demanding that she and others be given the freedom to practice their beliefs, a freedom that is written into Chinese law.

However, a security guard said the consulate does not accept any packages.

Lee said if Chinese authorities do not act and release Bai, she could end up like other Falun Gong practitioners who have been tortured to death or killed for the sale of their organs. The report “An Update to ‘Bloody Harvest’ and ‘The Slaughter,'” released in June by the investigative journalist Ethan Gutmann, the former Canadian secretary of state (Asia-Pacific) David Kilgour, and the Canadian human rights lawyer David Matas, estimates that in the years 2000-2015 between 60,000 and 100,000 transplants were performed each year in China.

According to the report, Falun Gong practitioners are believed to have been the primary source for organs. Given how inefficient the Chinese organ transplantation system is, one organ for transplant is believed in most cases to involve one person killed, the report said.

If the Chinese regime does not end the persecution now, Lee said, many more lives are threatened.

“We strongly call for the prosecution of [former Chinese leader] Jiang Zemin, because he’s the one who started the persecution,” said Lee.