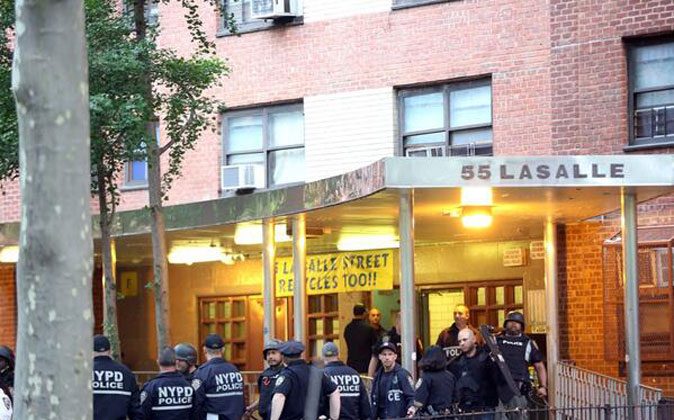 Police officers stand outside a housing project during an early morning raid in West Harlem on Wednesday. (Courtesy of NYPD)
Crime and Incidents

In all, 103 people are named on the indictment. The gangs are accused of two homicides, 19 non-fatal shootings, and 50 shooting incidents. They are due to be indicted in a Manhattan court on Thursday.

One of the victims in the indictment is Tayshana “Chicken” Murphy, an 18-year-old high school basketball star who was shot and killed in the Grant Houses in 2011. Two members of the Make It Happen Boys gang were sentenced to 25 years to life in prison for Murphy’s murder.

The three gangs involved—3Staccs, Make It Happen Boys, and Money Avenue—are not organized, for-profit drug operations. Rather, they are composed of mostly young men aged 15-30 who unleash violence on members of rival gangs in territorial disputes and petty feuds. Children as young as 10 years old were used to carry loaded guns for the gangs.

“They are the children of people in those developments who are terrorizing the children and families in the other developments,” Police Commissioner William Bratton said. “Make no mistake, the motivation oftentimes here is not about drugs. It’s just violence for violence’s sake. It’s feuds over nothing.”

The police and the district attorney’s office built an extensive case against the gangs by reviewing over a million social media pages, analyzing more than 40,000 calls from prisons and jails, and screening hundreds of hours of surveillance video.

The large-scale raid is a signature tactic of the Manhattan district attorney’s Violent Criminal Enterprises Unit. District Attorney Cyrus Vance established the unit in 2010. The unit uses intelligence to map out crime hot spots and link them to people who are driving crime in the area. Cases are then built against the crime drivers with an aim to pull them out of society.

Some 500 officers took part in the operation as helicopters patrolled the area. Bratton arrived at 4:30 a.m. as officers gathered prior to the raid. He then accompanied a team of officers to witness two arrests.

The gangs will be charged on 145 counts, including conspiracy, attempted murder, and gang assault.

The indictment charges that members of all three gangs attempted to kill one another, assaulted rival gang members, and possessed illegal firearms. The gangs sought to assert their power and control their territories through shootings, stabbings, slashings, gangs assaults, and robberies. Nearly half of the defendants are charged with conspiracy to commit murder, the maximum punishment for which is 25 years to life in prison.

The gang feud between Grant Houses and the Manhattanville Houses stretches back decades, but a spike in violence since 2010 has drawn the attention of the police and the district attorney’s office. A male was shot and wounded at one of the projects the night before the raid.

For the residents of the neighborhood, the cycle of violence manifested in an atmosphere of terror. Bratton met with two women who, fearing the worst, decided not to organize an annual Family Day event.

“This is a strong enforcement action but it is not a cause for celebration,” Bratton said. “It alarms all of us to see so many young people involved in gang and violent activity.”

Of the 103 people indicted, 40 were arrested Wednesday morning, 39 were already in custody prior to the raid, and 24 are still at large.