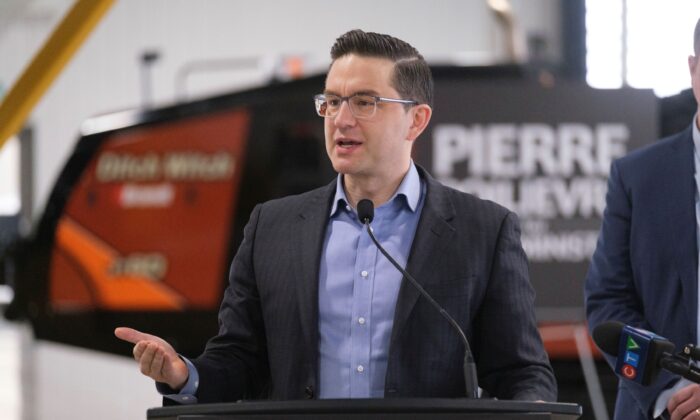 In a speech at an annual conference for financial market professionals, Pierre Poilievre told attendees that private companies are less susceptible to “woke capitalism” than public entities, while criticizing those he described as “self-serving elites.”

The federal Conservative leadership candidate made the comments as he delivered the opening keynote on May 5 at the Private Capital Markets Association’s Spring Conference 2022. It was the fourth year he participated in the conference. A few hours later, he took part in the first Conservative leadership debate alongside four of his rivals.

“This woke movement is designed to enrich a small privileged few at the expense of workers and investors, and to distract people using identity politics,” Poilievre said in his address.

In recent years, highly visible public corporations have started catering to a more progressive agenda. One example is the push for companies to adhere to ESG (environmental, social, and governance) factors.

Poilievre said private markets are “often more immune to the kind of pernicious interference” from those pushing ESG as a mantra on publicly traded companies.

“And so I think that private capital is becoming increasingly attractive because it’s focused on delivering positive outcomes, rather than on pleasing a small [set of] self-serving elites like Mark Carney and others,” Poilievre said.

The Conservative MP for the Carleton riding in Ottawa pointed to the example of Carney opposing Canadian pipeline projects while investing in pipelines elsewhere around the world through his position as vice-chair and head of impact investing at Brookfield Asset Management.

Carney, who is also the U.N. special envoy on climate action and finance and a former Bank of England governor, proposes using financial regulation to steer the trillions of dollars in private pools of capital such as pension funds toward net-zero initiatives.

Poilievre touched on a number of the initiatives he’d undertake if he were to become Canada’s next prime minister.

He started by saying “people have lost control of their lives” and cited examples such as a young girl who feels depressed for not being able to participate in sports or social activities for the past two years, or a small business owner who has had to shut down so many times that they can no longer reopen.

Poilievre cited Canada as having the highest rate of inflation in 30 years—6.7 percent as of March—and unaffordable housing, and said those are the problems a government he leads would need to solve.

Poilievre has long criticized the Liberal government and Bank of Canada for their actions at the start of the pandemic, which amounted to the central bank financing the feds’ spending by printing dollars. The process tends to create inflation and is employed when policy-makers fear deflation as being a bigger risk.

Woke Capitalism Is a Monopoly Game

“It’s clear that there is a small group that is benefiting from our economic model and a very large group that is suffering and that is because we’re creating cash rather than creating what cash buys us,” he said.

Poilievre proposed that governments pay as they go—that every dollar spent must be met with a dollar saved. And if a given government department can’t find a dollar to save, then it would have to convince the broader government to find that dollar within its existing budget.

He said he’d cancel the “excess spending” of the Liberals, eliminate the Canada Infrastructure Bank, and defund the CBC. He said he’d sell all of the CBC’s buildings to create more housing.

Poilievre also said he would tie federal funding for larger cities with home prices that are on average five times more than the median local income to increasing their housing supply by 15 percent a year or face having their infrastructure clawed back.

The Bank of Canada has also been analyzing a central bank digital currency, much like other central banks around the world, and The Canadian Press reported that it would only plan to issue one if the use of physical bills plummeted or if a private cryptocurrency like Bitcoin became widely used.

“We will ban the bank for bringing in a central bank digital currency. I do not trust the government to control our personal bank accounts. It will lead to censorship, politicization, and even more inflation,” Poilievre said.

One of Poilievre’s tenets is “removing the gatekeepers,” which are those obstacles that impede, for example, homebuilding or immigrants getting licenses to practice, or what people say and see on the internet. He reiterated how he wanted to make Canada the “freest nation on Earth.”