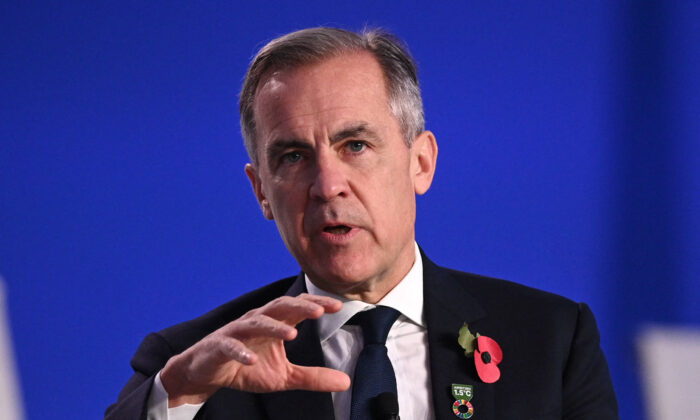 Mark Carney, former governor of both the Bank of Canada and Bank of England and now UN special envoy for climate action and finance, attends the opening of Finance Day at the COP26 UN climate summit in Glasgow, Scotland, on Nov. 3, 2021. (Daniel Leal/AFP via Getty Images)
Investment

To begin to access the trillions of dollars needed to transition to green energy, policy-makers are increasingly justifying climate change as a threat to the financial system and using regulation to steer funding away from fossil fuels.

However, experts are highly skeptical. They say this trend could diminish the independence of central bankers and financial regulators from government, and that these bodies that watch over the financial system don’t have the specific expertise to deal with climate change. Experts also point out that investment managers have a fiduciary duty to their clients.

Fund managers’ fiduciary duties—their legal duty to act in the best interests of their clients—prevent them from “monkeying around with people’s retirement savings in pursuit of their [policy-makers’] environmental goals,” Ross McKitrick, a University of Guelph economics professor specializing in environment, energy, and climate policy, told The Epoch Times.

If green investments are sound and earn a competitive rate of return, the market will seek them out and people will invest in them—without needing a lot of climate finance rhetoric, McKitrick said.

“But that should happen through ordinary market processes, not through governments, central planners forcing the money in there,” he added.

Such concerns are challenging the views expressed by policy-makers like Mark Carney, UN special envoy on climate action and finance.

The former governor of both the Bank of Canada and Bank of England, speaking on English journalist Lionel Barber’s “What Next?” podcast on Nov. 11, said the brunt of the astronomical cost of transitioning to green energy “can only truly come from the private sector … Governments just do not have the money or, candidly, the expertise to address these issues on that order of magnitude.”

Over US$130 trillion of private capital is said to be committed to “science-based net-zero targets and [its] near-term milestones” under Carney’s direction as head of the Glasgow Financial Alliance for Net Zero (GFANZ), a global coalition of financial institutions “committed to accelerating the decarbonization of the economy.”

John H. Cochrane, senior fellow at Stanford’s Hoover Institution and former University of Chicago business professor, said in a Nov. 19 blog post “A convenient myth: Climate risk and the financial system” that, “in even the most extreme scientific speculations,” there’s nothing to support the possibility that climate change could cause a near-collapse of the financial system like in 2008 or worse.

“Climate risk to the financial system is a big lie,” he said.

One of the reasons for financial regulation to factor in climate change amounts to climate policy advocates wanting to dismantle the fossil fuel sectors, Cochrane said.

He pointed out that financial regulators are not climate scientists, and noted that the problem is that the politically motivated movement is of the view that financing the “wrong” investments—fossil fuels—is what represents “the financial system’s risk to the climate.”

“That central bankers will figure out what to deny, what to subsidize, and how to rate banks on their climate investments is a fantasy,” Cochrane said.

“A dispassionate, honest effort to look at out-of-the-box risks to the financial system, together with a humble attitude towards regulators’ ability to foresee them, is a good idea.”

“Our goal for COP26 has been to build a financial system in which every decision takes climate change into account,” Carney said on Nov. 3 at the Conference of the Parties UN climate summit, adding that “doing so will require a radical new approach to mobilize private finance at unprecedented scale.”

However, respondents to a climate change consultation launched by Canada’s banking regulator said financial institutions could manage climate-related risks through existing governance and risk management frameworks, along with new tools like climate-related scenario analyses. The Office of the Superintendent of Financial Institutions (OSFI) on Oct. 12 published feedback from over 70 respondents, among them federally regulated financial institutions and pension plans.

Regarding integrating ESG (environmental, social, and governance) factors in investment decisions, respondents said pension plans should consider whether those factors “are relevant to the financial performance of an investment pursuant to the plan administrator’s fiduciary duty to act prudently.”

“There was general agreement that any new OSFI climate-related guidance be principles-based and aligned with global standards where they exist, while considering the Canadian context,” OSFI reported.

The respondents told OSFI that, to ensure financial institutions are prepared and resilient to climate-related risks, it’s not necessary to require them to hold some new minimum amount of capital, which would serve to absorb losses from any number of risks. Instead, supervision and market discipline—judicious risk-taking—would be sufficient.

Still, OSFI is forging ahead with its commitment to green. It announced its membership in the international Network of Central Banks and Supervisors for Greening the Financial System (NGFS) on Nov. 30.

“OSFI’s membership in the NGFS is a critical, though not final, milestone in our efforts to address climate change risk amongst Canadian financial institutions and pension plans,” said OSFI superintendent Peter Routledge in a statement.

The Bank of Canada aims to quantify climate risks, saying in its climate change commitments for COP26, announced on Nov. 3, that this will assist in the “efficient allocation of capital to more sustainable investments and supports the stability of the financial system.”

But promoting sustainable investments is not the responsibility of central banks, which have other significant policy commitments, according to former International Monetary Fund chief economist Raghuram Rajan, who is also a former Reserve Bank of India governor.

“Central banks should steer clear of politically driven unlegislated areas such as ‘green’ investments, as their mandates of providing financial and monetary stability are already quite wide,” Rajan told the Reuters Global Market Forum on Aug. 25, according to a Reuters article the next day.

The Bank of Canada is developing new models and data sources to better understand the effects of climate change on the economy.

“The climate-related increases in the frequency and severity of extreme weather events and the transition to a low-carbon net-zero economy pose significant risks to the financial system,” the central bank said.

Monetary policy expert Steve Ambler, an economics professor at Université du Québec à Montréal, concurs with Cochrane that climate change does not pose a threat to the financial system and that none of the central banks have the in-house expertise to deal with climate change.

For him, another issue is weighing the costs and benefits of financial regulation to deal with climate change.

“Just trying to set up costly frameworks for financial firms and the financial industry as a whole to disclose climate risk—I think in terms of cost-benefit analysis, I can see that it could be extremely costly. I don’t really see that it’s going to generate very many benefits at all,” Ambler told The Epoch Times.

“If you have banks spending money hiring people so that they can write these complicated climate-risk disclosure documents, you might want to have them do the same thing in relation to the risks of whatever thermonuclear war, asteroid strikes you.”

The United States is also trying to employ financial regulation to fight climate change—via a May 20 executive order from President Joe Biden.

However, Washington, D.C.-based research institution The Heritage Foundation says a much better approach would be to allow companies to manage their own risks without government mandates.

“Congress should prohibit banking regulators from considering social or political objectives, including climate change, in the supervision and examination of banks or credit unions,” it said in its June 24 report, “Using Financial Regulation to Fight Climate Change: A Losing Battle.”

“Given the enormous uncertainties surrounding climate-change predictions and the tenuous connection between financial disclosure and, for example, emissions, regulations based on such estimates are unlikely to affect the climate, and will have an adverse impact on the economy,” the foundation said.

Cochrane said it all amounts to the independence of central banks and financial regulators from the government getting increasingly compromised. Ambler agrees.

“The politicians themselves are unwilling to do things that will make taxpayers angry and [take] actions which will be costly. So they’re just kind of passing the buck on to central bankers,” he said.