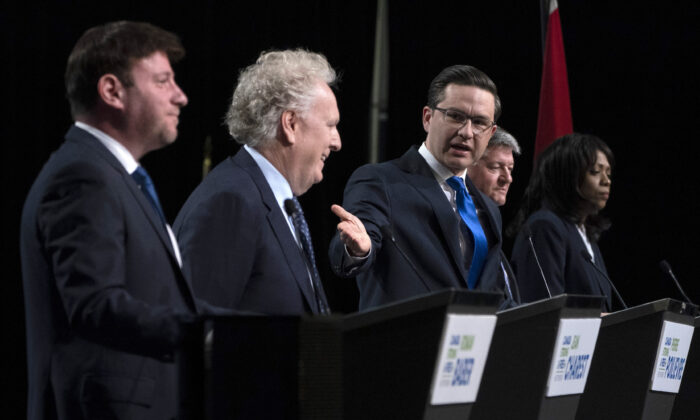 Conservative Party leadership candidates took the stage on May 5 in their first debate, where MP Pierre Poilievre said his initial support for the Freedom Convoy truckers in February remains unchanged despite what has transpired since.

When asked by the moderator if his support for the truckers in the convoy protest is a liability, as suggested previously by leadership rival Jean Charest, Poilievre said he maintained his position of supporting “law-abiding and peaceful truckers who were fighting for their livelihoods and liberties, while condemning any individual who breaks the law, blocks critical infrastructure, behaves badly.”

Former Quebec premier Charest accused Poilievre last month of being unfit for party leadership due to his support of the convoy, which demonstrated in Ottawa for three weeks this winter against federal COVID-19 mandates and restrictions.

“Mr. Charest learned about the trucker convoy on CBC, like other Liberals, and he misrepresented them,” said Poilievre in defence of the truckers, prompting cheers from the crowd.

Poilievre then told Charest it was “a little bit rich” for him to “talk about law and order” due to the allegations of corruption surrounding illegal donations made to the Quebec Liberal Party during Charest’s time at the helm.

The Quebec anti-corruption unit looking at the matter announced in February it was stopping its activities, and no charges were filed.

Charest wasn’t allowed to immediately respond to Poilievre’s criticism due to the debate format, but later reiterated his claim that Poilievre cannot run for leadership due to his support of an “illegal blockade,” referring to blockades of several U.S.-Canada border crossings set up by supporters in solidarity with the Freedom Convoy.

“You cannot make laws, and break laws, and then say ‘I will make laws for other people.’ I’m sorry, but that is a question of basic foundational principles,” said Charest, who was booed by the crowd and then cut off by the moderators for going over his allotted time.

The Freedom Convoy was polarizing for the Conservative Party and may have contributed to the ousting of former leader Erin O’Toole on Feb. 2, a few days after the trucker-led protest began in Ottawa.

O’Toole tread carefully on the matter, whereas some MPs like Poilievre expressed support. As the protest dragged out and border blockades sprung up in support across the country, newly appointed interim leader Candice Bergen told the protesters to leave while promising to carry the mantle of the fight against the COVID-19 restrictions.

Poilievre also criticized Charest on other issues during the debate, with Charest brushing it off during a post-debate scrum.

“Being attacked, if you know anything about politics and debates, I take it as a compliment. It means something. I wouldn’t be attacked if anyone felt that my candidacy in this race wasn’t a threat,” he said.

The debate was not an official one organized by the party but was rather part of the Canada Strong and Free conference taking place in Ottawa from May 5 to 7, a conservative networking event founded by former Reform Party leader Preston Manning.

Conservative Party leadership candidates were not obligated to attend but three others did: Roman Baber, Scott Aitchison, and Leslyn Lewis. Brampton Mayor Patrick Brown did not participate, with his campaign saying he was busy selling memberships before the June 3 deadline when supporters must be a member in order to vote in the contest.

The first official English debate will take place on May 11 in Edmonton. The French debate will be in Laval on May 25.