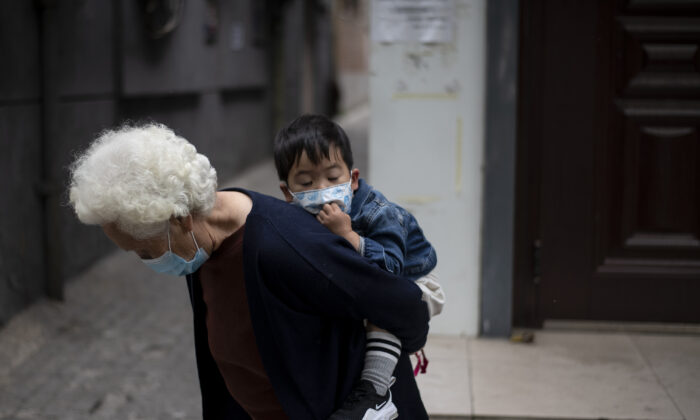 An elderly woman is piggybacking a boy along a street in Beijing, China on May 11, 2020. (Noel Celis/AFP via Getty Images)
Social Issues

China’s senior population official acknowledged in an annual population meeting that China’s population growth slowed down and was expected to record a decline before 2025.

China’s provinces and municipalities have published their population data, alongside other statistics, for the year ending Dec. 31, 2021. Six provinces—Guangdong, Henan, Shandong, Sichuan, Hebei, and Anhui—each recorded an increase of over 500,000 people

Although the population of Anhui Province grew in the past year, the number of births decreased by 47.6 percent from 2017 to 2021, after declining for four consecutive years, which Yicai called a “cliff-like drop” in September 2021. Yicai predicted Anhui would have 530,000 births by the end of the year, but the actual number was 515,800, according to the provincial health commission.

On July 11, the United Nations published “World Population Prospects 2022″ (pdf), a report on world population trends from 1950 to 2050. It says that China is expected to experience “an absolute decline” as early as 2023 and that, next year, India will surpass China as the world’s most populous nation.

“Housing, education, childcare, and medical costs all add up to an absolutely prohibitive cost of having two more children,” said Frank Tian Xie, a John M. Olin Palmetto professor in business and associate professor of marketing at the University of South Carolina Aiken.

“Young people simply do not want to get married or have children as a result of the high costs,” Xie told the Chinese language edition of The Epoch Times in a recent interview.

Dividing the total expense by 12 years, the average annual expenditure would be $12,000, which exceeds the city’s 2020 average personal disposable income (PDI) of $10,700.

During the draconian lockdown of Shanghai from late March to June, a young man from Shanghai refused to go to a quarantine camp. When police told him that his attitude and lack of cooperation would affect his family for three generations, the man replied, “This is the last generation.”

James Gorrie, author of “The China Crisis,” noted in a commentary for The Epoch Times in June that the response of  “the last generation” allows “young people to easily express their own despair with life” and “is borne of despair and disillusionment with life in modern China.”

Xu Jian contributed to the article.