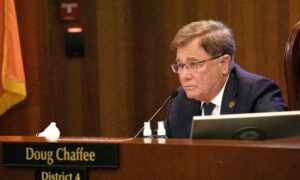 Pictures and footage from an Alabama prison show a riot taking place on Saturday morning.

The videos and photos from the Holman Correctional Facility in Atmore show inmates setting fires and causing mayhem.

One video that appeared on YouTube and Facebook appears to have been filmed by an inmate then subsequently posted online.

The Escambia County Alabama Sheriff’s office confirmed to WKRG that a riot was going on, although the exact details are unclear.

In the images and footage, most of the inmates have their faces obscured and are overturning beds and other materials, and setting fire to some.

According to AL.com, one man posted this to Facebook: “Attention: We need yall help here at Holman Correction Facility Prison. The police down here beating on and just treating us any kind way. We down here fighting for are lifes. Please contact the News, Newspaper, Radio station. NCAAP. Help please.”

Her son Jamario Houston called her several hours prior and said prisoners had built a wall. She hasn’t heard from him since.