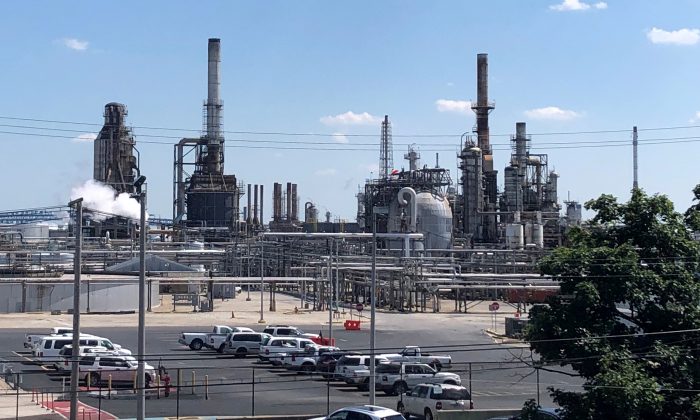 NEW YORK/PHILADELPHIA—Philadelphia Energy Solutions filed for Chapter 11 bankruptcy protection, the company said on Monday, July 22, its second such filing in less than two years, after a fire last month prompted it to close the largest refinery on the U.S. East Coast.

Following the June 21 explosions and blaze, PES started shutting down the 335,000 barrel-per-day Philadelphia plant without a planned restart. Some 1,000 workers are being laid off.

Just witnessed this explosion heading to Philly airport.. praying no one was hurt pic.twitter.com/S0fcN50HaT

The company’s lenders agreed to provide up to $100 million in new financing to PES to usher it through the bankruptcy, it said.

The agreement allows PES to “safely wind down our refining operations and, with the support of our insurers and stakeholders, best position the company for a successful reorganization, the rebuilding of our damaged infrastructure, and a restart of our refining operations,” Mark Smith, chief executive officer of PES Energy, said in a statement.

“The success of our plan is critical to energy supply and security for the region, the Commonwealth of Pennsylvania and the City of Philadelphia,” Smith said.

PES could receive payouts of $1.25 billion in insurance claims connected to the fire and business closure, according to two sources briefed on the company’s policies.

The potential payouts include $1 billion for property damage and $250 million for loss of business, the sources said.

The insurance payouts were expected to be used as collateral for the new bankruptcy financing, the sources said.

PES has multiple owners, including investment bank Credit Suisse and investment firm Bardin Hill, and has both assets and liabilities between $1 billion and $10 billion, court filings show.

PES also asked to continue making insurance payments. Its premiums cost about $1.4 million each month on 39 policies, according to filings with the U.S. Bankruptcy Court for the District of Delaware.

The refinery has struggled financially for years, slashing worker benefits and scaling back capital projects to save cash. PES filed for bankruptcy in January 2018 to reduce debt, but cash on hand dwindled even after the company emerged from the process later in the year.

It was not clear whether re-entering Chapter 11 bankruptcy, which allows the company to restructure as opposed to liquidate its assets, would alter the interest of prospective buyers.

The company began selling its oil supplies and some equipment since announcing it would seek to shut the plant, triggering employee concerns PES no longer aimed to find a buyer willing to restart the refinery as it had initially said.

More than 600 union refinery workers will be laid off on Aug. 25. Others were let go shortly after the fire.

Hundreds of contractors that do business with the refinery are also expected to be affected by the shutdown.

Ryan O’Callaghan, head of the refinery union, said he was not surprised by the latest Chapter 11 filing.

“We went through it before and came out of it,” O’Callaghan said. “And the refinery kept going.”

By Laila Kearney and Jarrett Renshaw