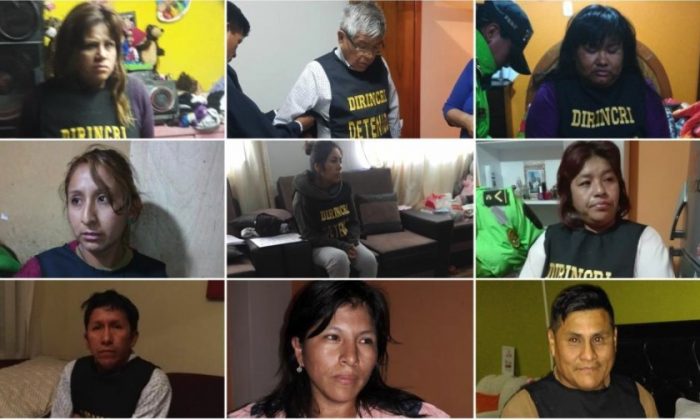 The office of Peru's Prosecutor-General released photos of some of the individuals detained in a raid, on Nov. 6, 2018. (Ministerio Publico Fiscalia de la Nacion via Twitter)
Americas

Police arrested Becerra and his romantic partner Cintia Tello in a raid on the former police chief’s home in the early morning hours of Tuesday, Nov. 6, the Peruvian Prosecutor’s Office said on Tuesday, according to the BBC.

Authorities accused the pair of membership in a gang dubbed “the Soulless Human Traffickers.” The criminal group is said to have preyed on poor pregnant women and persuaded them to give up their children.

Officials said they believe Tello was the gang’s ringleader.

One 5-month-old baby was rescued in what officials said was a series of coordinated raids targeting 18 properties in the southern city of Arequipa.

The Guardian reported that members of the gang included hospital workers whose role was to identify mothers that could be exploited. Among those arrested and accused of being members of the criminal group were a pediatrician and a gynecologist.

Also part of the gang were two women who, according to The Guardian, looked for poor pregnant women who were considering having abortions.

Abortion is illegal in Peru unless the mother’s health is at risk.

The two accused women allegedly persuaded the women to carry the babies to term and then to hand the newborn infants over in exchange for payment.

The cost of a baby was around 4,000 Peruvian soles ($1,187), local media reported, citing the Prosecutor’s Office.

Some of the members of the criminal organization allegedly cared for the babies in a variety of locations, while the group’s leaders looked for customers and presided over transactions.

Investigators are reportedly looking into whether the babies were offered for illegal adoption to foreigners or, possibly, for organ trafficking.

Becerra became head of Peru’s national police force in November 2010, during the government of former President Alan Garcia. He served for about a year, and was replaced in October 2011, after a subordinate accused him of sexual harassment, according to local newspaper El Comercio. Becerra denied the sexual harassment accusations.

All those arrested are being investigated for organized crime, human trafficking, and crimes against life and health, according to The Guardian.