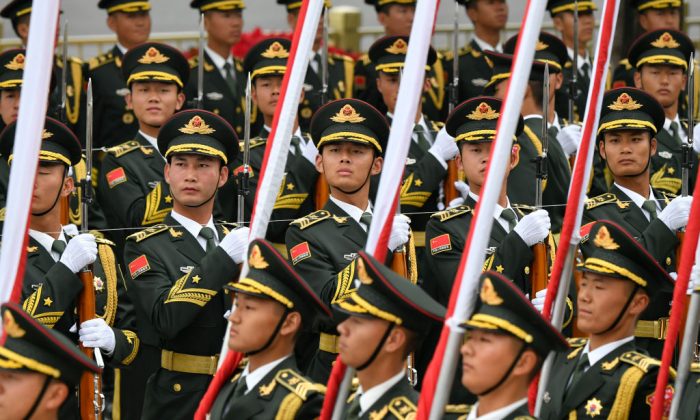 Chinese People's Liberation Army honor guards prepare for a welcome ceremony for Austrian Chancellor Sebastian Kurz at the Great Hall of the People in Beijing on April 28, 2019. (PARKER SONG/AFP/Getty Images)
US News

Perception of China Worsens Among Americans

Sixty percent of Americans today have an unfavorable view of China, up from 47 percent in 2018, according to a Pew Research Center poll released on Aug. 13. This marked the highest level since the inception of the survey in 2005.

“Around a quarter of Americans—24 percent—name China as the country or group that poses the greatest threat to the United States in the future, twice as many as said the same in 2007,” Pew Research wrote.

This ties China with Russia as the country most cited as a threat to the United States, while only 12 percent of respondents consider North Korea a top future threat.

The survey also shows that there’s a consensus across partisan lines on views of China.

“While both Republicans and Democrats have unfavorable views of China, Republicans’ opinions are somewhat more negative,” stated Pew Research. Seventy percent of Republicans view China in a negative light compared with 59 percent of Democrats.

The image of China among Americans has fluctuated over the years. During President Barack Obama’s first term in office, positive views surpassed negative ones. However, negative views have mostly predominated since then, according to the Pew study.

For years, Washington has accused China of stealing key technologies and intellectual property from U.S. companies using various tactics that include physical and cyber theft and forced technology transfers.

After taking office in 2017, President Donald Trump sought to take a tougher stance on protectionist and trade-distorting policies of Beijing. He launched a tariff campaign in early 2018 as part of a strategy to end China’s unfair trade practices. Instead of addressing U.S. concerns, Beijing responded to U.S. duties with tariffs on U.S. goods, starting with soybeans and other agricultural products.

The trade war between the world’s two largest economies has escalated in recent months, as the Chinese regime failed to deliver on its pledges.

Earlier in August, Trump announced that he would impose 10 percent tariffs on an additional $300 billion worth of Chinese goods, on top of 25 percent levies already in place on $250 billion of Chinese imports. However, the Trump administration on Aug. 13 delayed the move from Sept. 1 to Dec. 15.

In an effort to blunt the effect of U.S. tariffs, China recently devalued its currency, prompting the United States to label Beijing a currency manipulator. The Chinese renminbi weakened to its lowest level since 2008. A cheaper yuan relative to the U.S. dollar helps Beijing offset the increased U.S. tariffs by lowering the cost of Chinese goods. China’s recent currency manipulation has opened a new front in the trade war.

“We had a very good talk yesterday with China,” Trump told reporters on Aug. 13.

Trump has repeatedly accused the Chinese regime of backtracking on its commitments and delaying talks in the hopes of making a more favorable trade deal with a Democratic president after the 2020 U.S. presidential election.

Voices from both sides of the aisle, however, have been urging Trump to crack down on Chinese trade abuses. Key Democrats such as Senate Minority Leader Chuck Schumer (D-N.Y.) have repeatedly backed the president and urged him to “hang tough on China.”