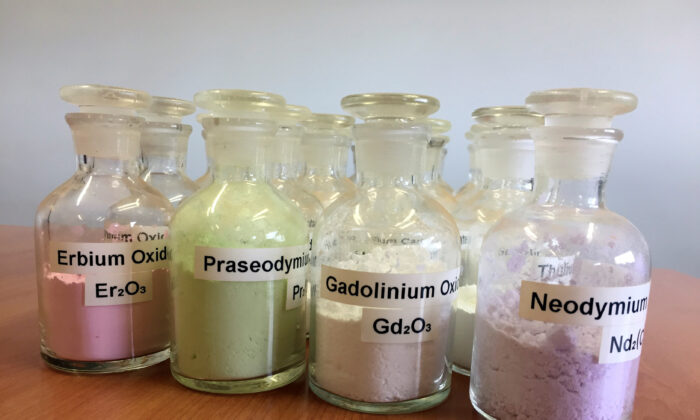 The battle for control of the global rare earths supply chain is heating up, with the U.S. Department of Defense investing in a new processing plant in a bid to challenge China’s chokehold over the critical minerals.

The Pentagon has agreed to fund the entire $120 million cost of a heavy rare earths separation facility to be built in Texas by Australia’s Lynas Rare Earths, advancing a program launched in 2020, the company announced on June 14.

Located on the Gulf Coast, the new facility will give the United States access to domestically produced heavy rare earths that are essential to industries such as electric vehicles, wind turbines, and electronics, according to the company, which is the largest processor of rare earths outside of China.

The Texas facility that landed Pentagon funding will process heavy rare earth carbonate mined in Australia, forming a production cycle that bypasses China entirely. Lynas Rare Earths plans to combine the upcoming plant with a proposed light rare earths separation facility that is being co-funded by the company and the Defense Department.

The project was first announced in July 2020 as part of the U.S. government’s strategy—under a 2017 executive order signed by former President Donald Trump—to reduce dependence on foreign imports of critical minerals. The Pentagon is also funding a heavy rare earths processing and separation facility in Mountain Pass, California.

Rare earths are a group of 17 elements with unique properties used in virtually every piece of modern technology, from smartphones to jet engines. Although the United States pioneered the industry during World War II, China now controls over half of global rare earths mining and 80 to 90 percent of intermediate processing.

China’s dominance of the industry represents a major risk to the United States, which currently has only one active rare earths mine—the Mountain Pass mine in California—and zero commercial-scale processing capability. America’s dependence on Chinese rare earths processing gives the Chinese Communist Party (CCP) dangerous leverage over the U.S. economy and military.

For example, the Chinese regime obliquely threatened to limit exports of rare earths to the United States after Washington placed Chinese telecom giant Huawei on a trade blacklist in 2019.

“It is believed that if the U.S. increasingly suppresses the development of China, sooner or later, China will use rare earths as a weapon,” the state-run Global Times newspaper warned in May of that year.

It’s unclear how much damage Beijing could do if it chose to pull the trigger on that threat. A Chinese embargo would send shockwaves through the global market—as happened in 2010 when China temporarily restricted exports of rare earth minerals to Japan over a territorial dispute.

A 2021 study by the U.S. Department of Energy found that a one-year export ban on rare earths by China could cause a 40 percent drop in magnet production outside of China as metals would become harder to obtain. Dysprosium oxide, a key component of the neodymium magnets used in a vast array of technologies from wind turbines to electric vehicles, is particularly vulnerable to price shocks from a Chinese embargo, the study found.

But China’s ability to harm the U.S. economy by weaponizing the rare earths supply is probably more limited than its industry dominance would suggest. A research note published by investment bank Raymond James in 2019 argued that the impact of a Chinese embargo on rare earths exports to the United States would be “mild,” according to a report by CNBC.

US Dependence on Chinese Rare Earths

Suppose a large-scale conflict breaks out between the two powers. In that case, a Chinese rare earths embargo could hobble the U.S. military, for example, by making it impossible to replace depleted stockpiles of air-to-air missiles.

“Much as the lack of secure access to oil was crippling to the Germans at the end of World War II, rare earths could play a similar, pivotal role in a future conflict with China,” wrote Colonel Charles J. Butler in a 2014 paper.

The CCP has explored the possibility of limiting the export of rare earth minerals that are used in American F-35 fighter jets and other advanced weaponry, the Financial Times reported last year. Government officials allegedly questioned industry executives about how badly U.S. and European defense contractors would be affected by such a move during a bilateral dispute.

US Responds to China Threat

The United States, in recent years, has begun to piece together a strategy for addressing the national security concerns involving rare earths.

For example, U.S. Sens. Tom Cotton (R-Ark.) and Mark Kelly (D-Ariz.) introduced a bill this past January to ban the use of Chinese rare earths metals in sensitive military systems by 2026 and create a one-year strategic reserve of rare earth elements and products by 2025.

Legislation put forward by Sens. Marco Rubio (R-Fla.) and Cindy Hyde-Smith (R-Miss.) in April would create a Department of Energy investment program to spur the development of rare earth production facilities in the United States, with the aim of reducing America’s dependence on China.