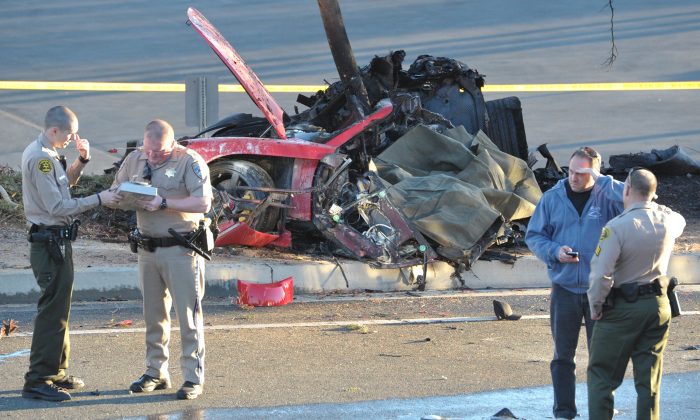 The wreckage of a Porsche that Paul Walker was a passenger in, in Valencia, Calif., on Saturday, Nov. 30, 2013. (AP Photo/The Santa Clarita Valley Signal, Dan Watson)
Entertainment

Paul Walker’s death has spawned a number of conspiracy theories claiming that the famed actor was murdered.

Walker died after the car he was riding in crashed in California on November 30. Roger Rodas, friend and financial advisor to Walker, also perished. The car caught on fire after crashing.

Autopsies showed that Walker was alive after the crash but died in the fire, while Rodas died from the crash alone.

Here are five alternative theories about Walker’s death that are being discussed:

1. How many trees did the car hit and did it hit a light pole?

Different media outlets are reporting a different number of trees that the Porsche hit, and most are reporting that the car hit a light pole when at first the pole wasn’t mentioned.

Pictures of the crash scene show the vehicle rammed into two small trees, a fact not lost on theorists who are wondering how a car could get so messed up by only trees. The pictures also don’t show the light pole.

The AP cited officials saying the Porsche crashed into a light pole then a tree. Jim Torp with Always Evolving, the auto shop Rodas and Walker co-owned, told Hollywood Life that the car hit one tree, then hit four other trees and a light pole. CNN reported that the car hit trees and knocked over the light pole, citing video it obtained.

A close-up of one of the trees at the crash site. (David Buchan/Getty Images)

2. Why did the car catch fire?

There hasn’t been an official explanation of why the car caught fire and exploded.

One of the more outlandish theories that is circulating regarding this point is that an “Obama drone strike” hit the vehicle, causing it to catch on flames.

The wreckage shows the extent of the fire because the entire back of the car looked like it was burnt.

Torp told CNN that he believed he heard a blast before the car hit the light pole. “What the first explosion was, I don’t know if their tire blew up, because it sounded like a tire blew on the car,” he said.

3. Why no skid marks right before the crash?

There were skid marks in the area of the crash–so many that authorities thought at one point that Rodas may have been drag racing with another car–but there weren’t skid marks in the part of the road right before the crash. Why not?

Sources at Always Evolving, the auto shop co-owned by Walker and Rodas, told TMZ that they saw evidence of a steering fluid leak, including a burst and subsequent trail.

4. Could Rodas Really Have Crashed?

Roger Rodas was an experienced race car driver.  A colleague told KCAL that Rodas was a gentleman racer, almost in the ranks of a professional racer. And an online profile of Rodas and Walker’s charity work describes Rodas as racing for many years–in fact, he met Walker after driving a Porsche GT 3 that Walker previously owned.

In addition, the colleague, Always Evolving engineer Cary Eisenlohr, said that Rodas would not have taken risks with Walker in the car.

“He realized if Paul was injured, he had three or four more movies to do,” Eisenlohr said. “He wouldn’t take any kind of a risk to do that.”

That means that the emphasis on how dangerous the Porsche Carrera GT is was likely misguided, because Rodas would have understood the risks and not messed around at all, especially with Walker with him.

5. Was Walker Murdered Because He Wanted to Quit Acting, or Because He Found Something Out?

Several of the prominent theories behind Walker’s supposed murder is that he wanted to leave acting, or that he uncovered something sinister about the disaster relief in the Philippines.

Paul Walker Sr., Walker’s father, said in a recent interview that Walker had wanted to leave acting, but had never been able to.

An author on Before It’s News, a website that frequently takes conspiracy angles on stories, commented: “Is that why Paul Walker was murdered? We know that with many ‘secret societies’, there is only one way out … we also know that there have been many mysterious deaths with celebrities who were done walking ‘the illuminati way.'”

Regarding the other primary theory, some people have alleged that Walker, during his charity work helping provide disaster relief to the Philippines following Typhoon Yolanda, uncovered something sinister.

Anonymous usess outlined the theory on an alternative news forum Godlikeproductions. One said that Walker and Rodas had discovered a conspiracy to supply Filipinos impacted by the typhoon “with a prototype permanent birth control drug hidden in medicinal supplies and food aid.” They were on their way to gave a “damning recording” to an ally but they were betrayed, so someone rigged the car’s brakes.

Another user said Walker discovered “dirty money” in the Philippines disaster relief. There was no concrete evidence listed for any of these theories.