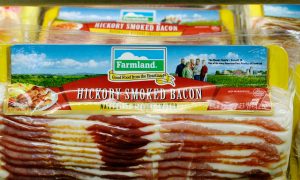 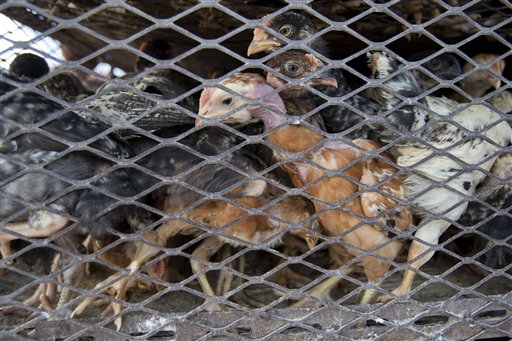 In this July 15, 2013 photo, chickens for sale stand in cage at a border market, near Jimani, Dominican Republic. Chicken from Chile entered America tainted with Dioxin, and food safety advocates are uneasy about imported foods. (AP Photo/Dieu Nalio Chery)
US

Passing the Buck on Foreign Food

Rather than issue a recall, the U.S. Department of Agriculture (USDA) released a weekend public notice explaining that the risk to consumers was “negligible,” even though over 62,000 pounds of contaminated poultry had still not been retrieved.

The chicken was imported from Chile, where a recent USDA audit found that processors still fell short on addressing dioxin contamination. Washington-based Food and Water Watch (FWW) raises concerns that the USDA is minimizing a foreign threat to the food system.

FWW senior lobbyist Tony Corbo sees a disturbing trend in food-safety imports where officials have “soft pedaled on what are essentially recalls.” He pointed to a 2012 incident with 2.5 million pounds of E. coli-contaminated beef from Canada. Just like with the Chilean chicken, the USDA avoided making a recall announcement, and Corbo believes it’s a strategy to keep tainted meat out of the media spotlight.

“All of a sudden with this Canadian thing, they started this new policy and I’ve been very critical,” he said.

“I’ve told the undersecretary of food safety I completely disagree with their approach, and the fact that the so-called public health alert did not get widespread coverage proved to me that the media was not taking this as seriously as if they had called it a recall.”

U.S. food imports have doubled over the past decade, and two regional trade talks set the stage for much more.

The Trans-Pacific Partnership and the Trans-Atlantic Trade and Investment Partnership aim to “harmonize” the standards of foreign suppliers pouring food and drink into the American market, but lawmakers accuse corporations and trade groups of running the show. Members of Congress have fought with the Obama administration to make the process more transparent, but negotiations remain behind closed doors.

The Food Safety Modernization Act (FSMA) is designed to address the influx of imported food by ensuring that facilities overseas meet American safety standards. It’s a noble goal but one that has proved too expensive for lawmakers to stomach and too ambitious for regulators to handle.

“In particular, on the Trans-Pacific Partnership, we import 90 percent of our seafood. A lot of it is coming from Asia. They do not have the same food-safety standards as we do—especially with the use of antibiotics [and] antifungals in aquaculture.

“So we are very concerned with whether the United States is going to increase the amount of imports from these countries because the FDA is already overwhelmed. They cannot handle what they’ve got now in terms of imports,” Corbo said.

The job is especially tough for the FDA. While only 34 countries are eligible to export meat, poultry, or egg products into the United States under USDA jurisdiction, the FDA must oversee about 160 countries and approximately 250,000 foreign establishments shipping in a wide array of food products.

On July 26, the FDA announced a new proposal to meet their challenge—import businesses will be responsible for assessing safety of their own products.

The agency is writing conflict-of-interest protections to avoid problems, but recent disasters involving third-party inspectors gives cause for concern. Corbo fears that as imports increase “we’re going to be dumbing down food-safety standards.”

Unfortunately, the FDA is faced with few options. Under FSMA, the number of onsite U.S. inspections stationed abroad is supposed to double every year for five years, but Congress has refused to pay for it.

Proposals in President Obama’s budget raise some of the money for overseas inspections, but since Congress won’t direct appropriations for the rest, the administration wants to charge the industry higher inspection fees to make up the difference. An April 2013 letter from 54 food-and-beverage industry trade associations makes clear that they don’t want to pay for it either.

“We urge Congress to provide FDA with sufficient funds to meet its food-safety responsibilities without saddling food makers and consumers with new regulatory taxes,” the letter stated.

What many food-safety advocates would like to see is the FDA with a foreign-safety system more like the USDA. While industry leaders say such a plan would destroy trade, supporters say USDA’s system can at least exercise some control over who can and can’t import in the first place.

“Even though there are little cracks in the system like this Chilean thing, it’s a better system because a country has to get a firm approval from the USDA before they can export their products to the United States,” Corbo said.